A 68-year-old patient, without relevant medical history, suffered from a syncope without prodromal signs. There were no constitutional symptoms such as fever or loss of weight. The ECG demonstrated sinus rhythm with a first-degree atrioventricular block. The transthoracic echocardiographic study (TTE) showed preserved left and right systolic function. Attached to the interatrial septum, a giant left atrial mass, oscillating through the mitral valve in the left ventricle, was seen. However, the echo Doppler transmitral flow pattern could not document left ventricular inflow obstruction. The TTE images showed different echocardiographic tissue characteristics of the basal and apical segments of the mass (figure 1, panel A).
Transoesophageal echocardiography (TEE) confirmed the attachment of the heterogeneous mass to left atrial septum by a thin stalk (figure 1, panel B). Coronary angiography excluded severe coronary atherosclerosis. The vascular supply of the mass originated from the right coronary artery (figure 1, panel C).
Contrast-enhanced (Sonoview®, Braco Milan) TTE demonstrated a different density in contrast uptake, where the septal part of the mass was better vascularised (higher contrast uptake) compared with the apical segments of the mass (figure 1, panel D).
The patient was referred for prompt resection of the mass to avoid embolic events.

Given the above-mentioned information, what would be your single best answer, if you were asked to make a guess regarding the nature of this mass before the histological confirmations became available? 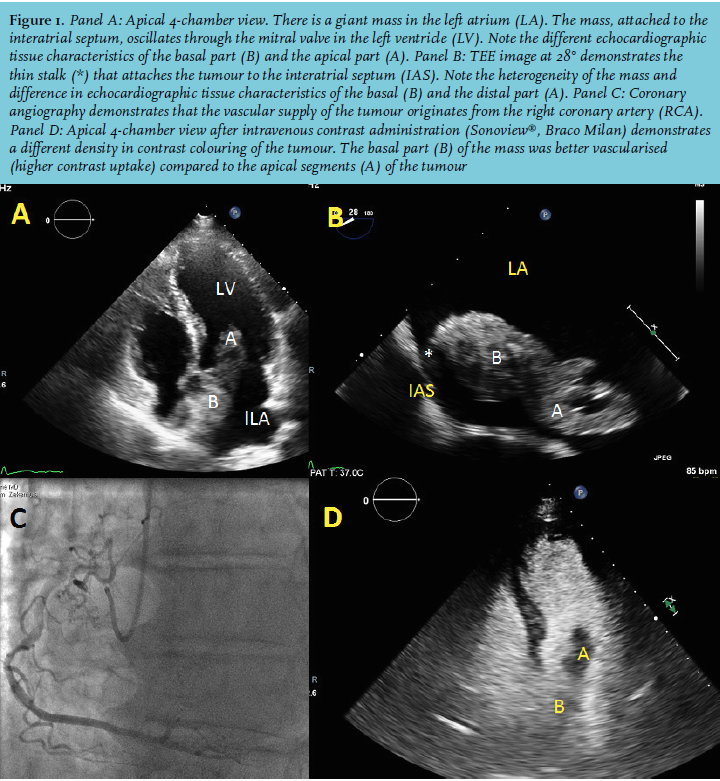