Acenocoumarol as a risk factor for calciphylaxis: a feature clinicians should be aware of 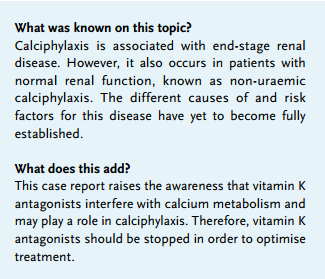 A 82-year-old female presented with a painful lower right extremity after a fall five weeks before. There were two necrotic lesions on her right leg, surrounded by livedoid reticularis (figure 1a). The medical history of this patient included obesity, diabetes mellitus, hypertension, mechanic heart valve implantation, chronic obstructive pulmonary disease, and chronic kidney disease (modification of diet in renal disease (MDRD) of around 30 ml/min). The patient had been using acenocoumarol for 5 years, and additional medication included metoprolol, simvastatin, furosemide, formoterol/ beclomethasone, tiotropium, and oxazepam. Anti-phospholipid syndrome, vasculitis, systemic lupus erythematosus, and cryoglobulinaemia were excluded. Calcium and phosphate levels were normal, and parathyroid abnormalities, and a biopsy was taken. Differential diagnoses included polyarteritis nodosa, cholesterol embolisation, and calciphylaxis. Topical corticosteroid therapy and pain management were pragmatically started. Unfortunately, the biopsy was inconclusive. Meanwhile, the symptoms worsened, but the patient did not agree to a new biopsy. Oral prednisone was started, with vasculitis/ polyarteritis nodosa as the main working diagnosis. A wound culture did not reveal any non-physiological flora. The symptoms continued to worsen (figure 1b) and a few months later the patient agreed to a new biopsy. This time the biopsy demonstrated a clear image of calciphylaxis (figure 2). Further laboratory evaluation showed a normal serum calcium of 2.32 mmol/l (2.10-2.55 mmol/l), a normal phosphate level of 1.04 mmol/l (0.80-1.50), a mildly increased parathyroid hormone of 10.0 pmol/l (1.6-6.9 pmol/l), and decreased vitamin D (25-OH) of 17 nmol/l (> 50 nmol/l). Creatinine level was 119 μmol/l and the MDRD was 38 ml/min. Subsequently, suppletion of vitamin D was started, and the hyperparathyroidism was corrected by prescribing cinacalcet (mimpara). Simultaneously, acenocoumarol was replaced by a low-molecular-weight heparin (LMWH). Unfortunately, two weeks later our patient died, with cardiac failure being the most presumable cause in a multifactorial situation. No autopsy was allowed. 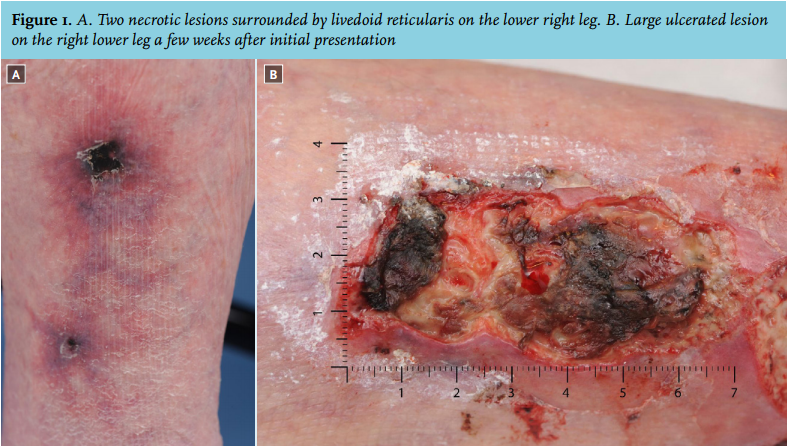 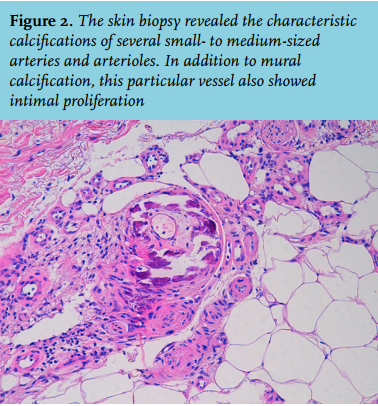 Pathophysiology
In contrast to atherosclerotic disease, in which the intima is the site of calcification, calciphylaxis involves calcification of the tunica media. The intima is not left untouched, as a process of fibrosis takes place there. Progressive calcification and endothelial dysfunction lead to thrombotic occlusion and ischaemia, which causes tissue necrosis of the skin. The process of calcification starts with the transformation of vascular smooth muscle cells (VSMCs) into osteoblast-like phenotypes. VSMCs normally produce matrix gla protein (MGP), a protein that binds calcium phosphate and thus has a strong inhibitory effect on tissue calcification. Vitamin K antagonists are thought to reduce functional MGP, as they interfere in the vitamin K carboxylation by which MGP is normally activated.8 Vitamin K consists of vitamin K1 and K2, and vitamin K antagonists are not selective for either one of these. Vitamin K2 is involved in the inhibition of calcium deposition in blood vessels, while vitamin K1 leads to the contemplated anti-thrombotic effect. Currently, there are different ongoing trials that examine the role of vitamin K in vascular calcification to a greater extent.9

Differential diagnosis
Calciphylaxis in the presence of vitamin K antagonist use should be distinguished from warfarin skin necrosis, a condition that is clinically similar. However, warfarin skin necrosis typically occurs a few days after the start of warfarin therapy, while calciphylaxis is associated with prolonged use.10 Histological findings are able to differentiate between the two, which is important since it determines the treatment of choice. Laboratory evaluation needs to be done as well and serves two major goals: to detect potential associated risk factors and to exclude other differential diagnoses. These diagnoses include vasculitis, atherosclerotic disease, cholesterol embolisation, nephrogenic systemic fibrosis, oxalate vasculopathy, and purpura fulminans.2,11 Laboratory work-up is extensively described elsewhere but mainly includes parameters for infection, hypercoagulability, and autoimmune diseases.11

Treatment
Due to its rarity, there are no evidence-based guidelines for the treatment of both uraemic and non-uraemic calciphylaxis and a combined approach is often implemented. If vitamin K antagonists are used, they should be stopped. In warfarin skin necrosis, this is the only necessary step. However, in calciphylaxis, it is also essential to restore calcium, phosphate, and parathyroid hormone homeostasis.10,11 If this treatment fails, intravenous administration of sodium thiosulfate is another option. In a similar case to ours, in which vitamin D suppletion and replacement of acenocoumarol by LMWH did not induce any improvement, sodium thiosulfate was successfully administered.12 In 2011, a review of 41 case reports described a success rate for sodium thiosulfate of more than 90%, although publication bias has to be considered.13 Another option that seems to be successful is hyperbaric oxygen therapy, as more than half of the patients benefited from this treatment.14

With this case report, the authors want to point out that calciphylaxis is an important differential diagnosis in patients without end-stage renal disease as well, since this disease has a severe prognosis with a high mortality. Whether vitamin K antagonists are an independent risk factor for non-uraemic calciphylaxis has yet to be determined. Pathophysiological studies provide interesting new links, but epidemiological studies lack adequate designs to rule out selection bias and confounding by indication. Nevertheless, awareness of a possible association is essential, and internists need to know they should stop these drugs for an optimal treatment.