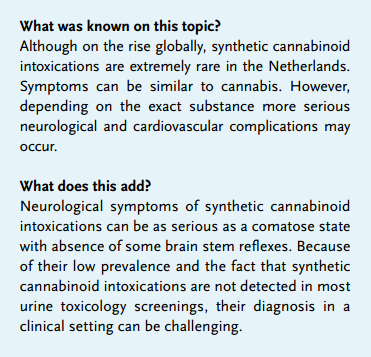 A 16-year-old male with no medical history presented to our emergency department. The patient had lost consciousness after smoking cannabis and subsequently a drug called ‘Bonsai’. On arrival to the emergency department physical examination revealed a Glasgow Coma Score of E1M1V1, dilated pupils, unresponsive to light and absence of some of the other brainstem reflexes.
Vital signs on presentation were normal except for mild tachycardia (100 beats/minute). ECG and laboratory examination showed no abnormalities. Because of persisting lack of consciousness the patient was intubated and invasive mechanical ventilation was started. A CT scan and CT angiography of the brain showed no pathological abnormalities.
A urine sample, which was obtained at admission, was positive for tetrahydrocannabinol but negative for amphetamines, barbiturates, benzodiazepines, cocaine, methadone, opioids and tricyclic antidepressants in our immunoassay testing kit. Ethanol and gamma-hydroxybutyric acid were measured in the serum, but could not be detected.
On the ICU we attempted to stop sedation. However, the patient became very agitated, so he was kept sedated overnight. The next morning sedation was successfully stopped and the patient was extubated and discharged home in good clinical condition.
After discharge, a toxicology screening of the patient’s serum was obtained by liquid chromatography mass spectrometry (LC-MS/MS). The target screening method was based on the method described by Jaenicke et al.3 and consisted of 32 synthetic cannabinoids. Based on the retention time and mass spectra, the presence of O-2545, a synthetic cannabinoid, was confirmed.