A survey was conducted among all non-paediatric ICUs in the Netherlands. The study was registered at the Local Institutional Review Board of the Catharina Hospital, Eindhoven, the Netherlands. In September 2016, a representative ICU physician or nurse was identified for each ICU, and was then asked to participate in the survey. Participants could either answer the survey questions immediately by phone, or receive the survey by e-mail to be completed at a later stage. Two reminders were sent, one week and two weeks after the initial invitation. Non-responders were contacted again once more in November 2016.

The survey
The survey consisted of seven questions regarding the application of closed-loop modes (figure 1). The use was classified as frequently, occasionally or never if respondents with a closed-loop ventilation mode had applied this mode at least once in the preceding week, month to year, or never, respectively. Reasons for not using closed-loop modes could be scored as ‘lack of knowledge’, ‘insufficient evidence reporting a beneficial effect’, or ‘lack of confidence in the mode ’. Respondents were also able to suggest additional reasons using an open field. An independent medical epidemiologist verified the methodological quality of the survey. Analysis
The availability of a closed-loop mode and the frequency of use was analysed per ICU level. In the Netherlands, all Dutch ICUs have been classified from level 1, low level ICUs, to 3, high level ICUs, based on the ICU size, patient volume, ventilation days, and staffing.5 Data were collected and entered into Microsoft® Excel® version 14 (©2010 Microsoft Corporation). Categorical responses of questions were described as the proportion (percentage) of respondents selecting each response.

The response rate of the survey was 82% (72 of 88). Respondents had access to a closed-loop ventilation mode in 58% of the ICUs (42 of 72) (figure 2). Of these ICUs, 43% (18 of 42) frequently used a closed-loop ventilation mode, while 57% (24 of 42) occasionally or never used it (figure 3). The majority of the frequent users were level 3 ICUs (50% vs. 11% and 39% level 1 and 2, respectively), whereas the majority of the occasional users consisted of level 1 ICUs (54% vs. 16% and 29% level 2 and 3, respectively) (table 1 and 2). The ICUs with INTELLiVENT®–ASV never classified the frequency of use as occasional or never. No other noticeable differences were observed between the frequent users and the occasional users with regard to the types of modes. On the day of the survey, 24% of the ICUs (10 of 42) reported having at least one patient on a closed-loop ventilation mode. These ICUs averagely ventilated 51% of their ventilated patients with a closed-loop mode.
Respectively 17, 14 and 11 ICUs with access to a closed-loop ventilation mode stated that reasons for not using this mode were lack of knowledge (41%), insufficient evidence reporting a beneficial effect (33%) and lack of confidence in the mode (26%) (figure 4). Another 10% of these respondents mentioned that a perceived lack of control with the use of these modes might also play a role. With regard to (INTELLiVENT®–)ASV, 17% of the respondents expressed the concern that this mode selects higher tidal volumes than desired. Concerning NAVA, 7% of the respondents stated that the costs of the necessary disposables were a barrier for its use. 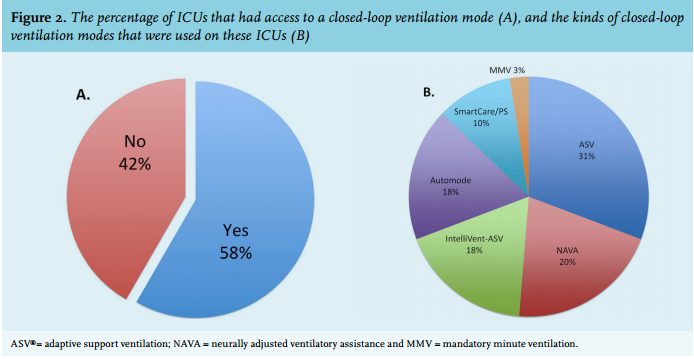 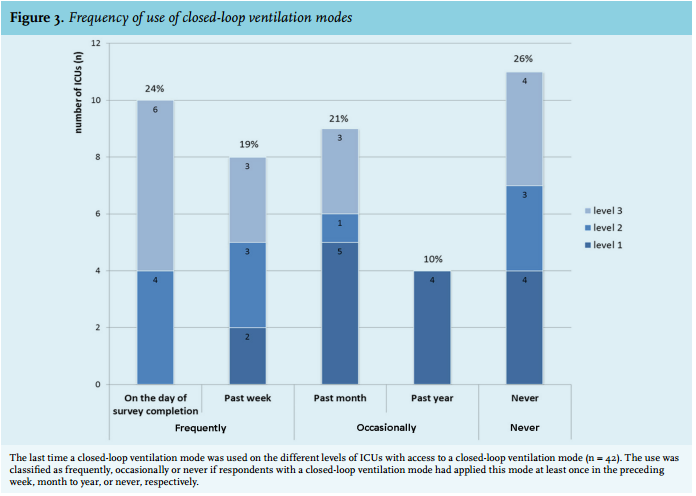 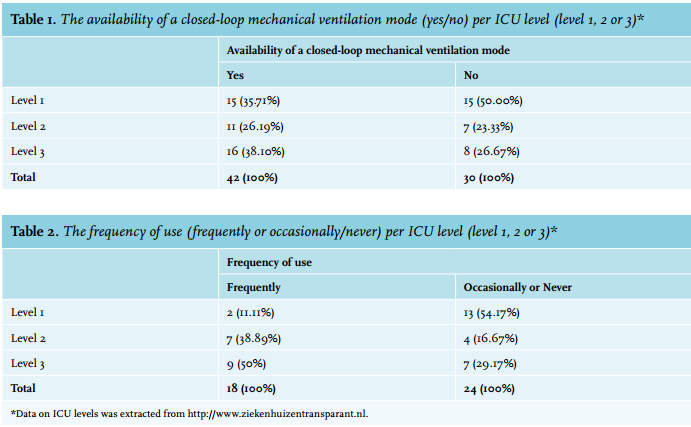 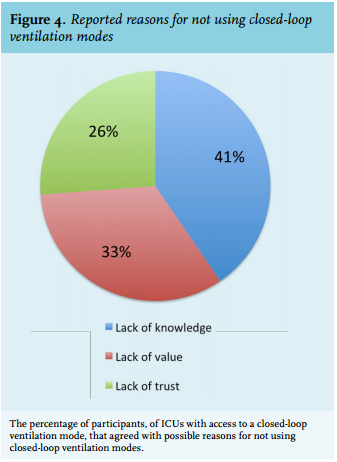 The results of this survey echo those from the international European survey in 2011 and the Ukrainian survey in 2013,3,4 but do not support our hypothesis that closed-loop ventilation is increasingly used in the Dutch ICU setting. The most reported reason for resistance in our survey was ‘lack of knowledge’, which might be explained, at least in part, by a lack of experience and insufficient education, which are needed for acquiring knowledge and for successful implementation.6 Both explanations depend on local manpower and on the case mix dependent culture of the ICU. Interestingly, this study shows that frequent users mainly consisted of high level ICUs, while occasional users were mostly lower level ICUs. One explanation could be that lower level ICUs have less staff and less time and means available for the introduction of new modes of ventilation, all leading to a more conservative culture.
The second-most mentioned reason for not using closed-loop ventilation modes was ‘insufficient evidence reporting a beneficial effect’. While various studies have been performed, among which three recent meta-analyses, results are still not conclusive.7-9 Additionally, in research, closed-loop mechanical ventilation modes are often grouped together, while these modes operate according to different techniques in order to achieve different goals for various indications. These considerations make the translation of research outcomes into clinical practice challenging, since it is uncertain to what extent this evidence can help the clinicians to choose for a specific closed-loop ventilation mode which best suits their specific case mix and local culture of the ICU.
The third reason for not using closed-loop modes was ‘lack of confidence in the mode’. In highly controlled environments such as the ICU, where the staff attempt to control each parameter as much as possible, it can be difficult to entrust this process to a machine, also known as the ‘black box effect’.10 This could explain why ‘lack of control’ was added as an additional reason for not using closed-loop modes.
Our study has certain limitations. First, although we reached a high response rate, the design of the study potentially introduces selection bias as clinicians who use closed-loop ventilation modes may be more inclined to respond. This means that the implementation rate might be even lower in reality. Secondly, this survey did not register the version of the modes used, and some comments may be related to older versions of the ventilation modes. For instance, ASV, INTELLiVENT®-ASV and NAVA have had several updates, which improved safety (e.g., lower tidal volumes in the first two modes) and ease of use (e.g., less alarms in the last mode).
Finally, this study does not provide a complete overview of all possible reasons that can influence the implementation of closed-loop modes. Many other possible contributing factors were not asked about in the survey, such as economic factors and long-term contracts with specific manufacturers.
In conclusion, while industry continues to develop new closed-loop modes, implementation of these modes in clinical practice seems to encounter difficulties. Various barriers could play a role, and these all need attention in future investigations.

All authors have disclosed that they do not have any conflicts of interest.