Statins for prevention of cardiovascular disease in systemic lupus erythematosus

Systemic lupus erythematosus (SLE) is a systemic autoimmune disease that can involve many organs, including the skin, joints, kidneys, serosae and haematopoietic system. While inflammation of these tissues often defines acute flares, the most important causes of long-term mortality are renal failure, infections and cardiovascular disease (CVD), encompassing ischaemic heart disease, cerebrovascular disease and peripheral artery disease. The standardised mortality ratio for CVD in SLE patients was 2.7 in a recent meta-analysis.1 Furthermore, in a large cohort of female SLE patients, the risk of myocardial infarction was increased 2- to 52-fold compared with controls. The relative risk was highest amongst young females with SLE, whereas the absolute risk was highest in older patients.2 Other presentations of CVD are more prevalent as well, with a 1.3- to 2.3-fold increased risk for cerebrovascular events amongst SLE patients and a 9.4 times higher incidence of peripheral artery occlusive disease.3,4 A major cause of CVD in SLE is premature atherosclerosis.5,6 Several factors contribute to this phenomenon. First, inflammation stimulates atherogenesis. Secondly, therapies aimed at suppressing inflammation (e.g. corticosteroids and disease-modifying antirheumatic drugs) often have cardiovascular side effects. Third, the prevalence of classic cardiovascular risk factors amongst SLE patients is increased (e.g. smoking, hypertension and obesity).7
Several treatment strategies are available to reduce morbidity from CVD in SLE. The cornerstone is treatment of general inflammation using anti-inflammatory drugs, thereby suppressing inflammation-driven atherosclerosis. Another important intervention is reversal of dyslipidaemia using statins. Apart from reducing intracellular cholesterol synthesis, statins also exert pleiotropic effects including inhibition of thrombosis and endothelial dysfunction, plaque stabilisation and immunomodulation.8,9 Examples of the latter are inhibition of LFA-1-mediated leukocyte adhesion, reduction of major histocompatibility complex-II expression on endothelium and suppression of the production of pro-inflammatory cytokines such as type I interferons and interleukin-17.9-11 These pleiotropic effects may provide additional benefits, especially in inflammatory diseases such as SLE.
Given the high burden of CVD-related morbidity and mortality in SLE, prevention of these complications could result in a robust health benefit. Amongst Dutch general practitioners, internists and European rheumatologists in general, clear guidelines are formed on cardiovascular risk management for the general population. Furthermore, specific recommendations are defined for patients with rheumatoid arthritis (RA), because of increased CVD risks.12,13 Lupus patients are even more at risk for CVD than RA patients,14,15 with a standardised mortality ratio for CVD of 2.7 compared with 1.5-1.8 in RA.1,16 However, these guidelines do not specify the management of SLE patients. Therefore, our aim was to review the evidence on the use of statins for prevention of CVD in SLE patients and provide a recommendation for future management. 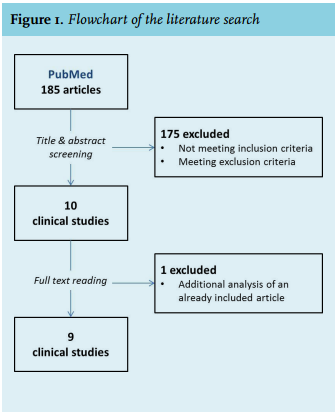 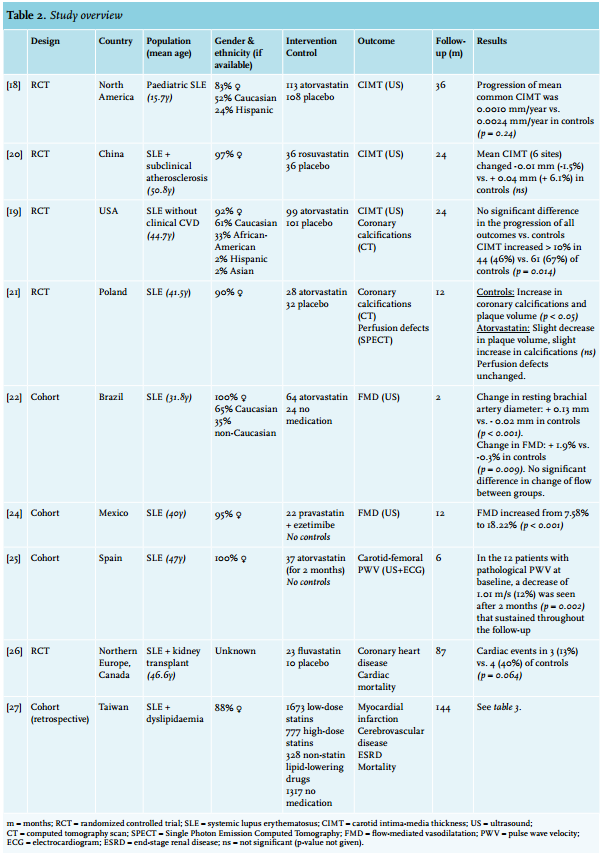 Prevention of cardiovascular disease
Three randomised controlled trials (RCTs) reported the carotid intima-media thickness (CIMT) of SLE patients that were treated with statins or a placebo. In a recent study, it was shown that CIMT significantly correlates with cardiovascular events in SLE patients.17 During a mean follow-up of 24-36 months on 212 SLE patients (113 with paediatric SLE), atorvastatin treatment did not significantly reduce CIMT progression compared with similar-sized groups of placebo-treated SLE patients, and neither did rosuvastatin (n = 36) in comparison with 36 controls.18-20 Amongst two RCTs, the level of computed tomography scan-determined coronary calcifications and myocardial perfusion were also not significantly influenced by atorvastatin treatment.19,21 However, only two months of atorvastatin treatment resulted in a 0.13 mm increase of brachial artery diameter in 64 SLE patients which was significantly different from the 0.02 mm decrease in 24 SLE patients that were not treated (p < 0.001). Furthermore, flow-mediated vasodilatation (FMD) increased 1.9% in the statin group versus a 0.3% decrease in the control group (p = 0.009).22 FMD is a measure of endothelial dysfunction, a process that plays a role in the pathophysiology of atherosclerosis.23 The FMD also improved from 7.58% to 18.22% in 12 months in 22 SLE patients who received the combination of pravastatin and the non-statin cholesterol lowering drug ezetimibe (p < 0.001).24 Finally, one study measured carotid-femoral pulse wave velocity (PWV) in 37 SLE patients that were treated with atorvastatin. In patients with a pathological PWV, a 12% decrease was seen over two months (p = 0.002). 25
Two studies measured CVD and mortality. One RCT measured these outcomes in 33 SLE patients who had received a kidney transplantation during a follow-up of 87 months. Coronary heart disease and cardiac mortality were reported in three of 23 patients treated with fluvastatin versus four of the ten patients that received a placebo (p = 0.064). 26 Although a large reduction in severe outcomes was seen here, this was not statistically significant, which could be the result of the small study population.
In 2015, a retrospective cohort study described the effects of lipid-lowering drugs on myocardial infarction, cerebrovascular disease, end-stage renal disease and all-cause mortality in a cohort of 4095 SLE patients that were all diagnosed with dyslipidaemia. Because of the sample size and the relevance of the findings, this study will be discussed in more detail. This study was conducted in Taiwan and used a national health-insurance registration system that included 98% of the country’s complete population. ICD-9 codes were used to identify SLE patients, the presence of dyslipidaemia and the above-mentioned outcomes. Patients were stratified in groups that used low-dose statins (cumulative dose < 365 daily doses), high-dose statins (cumulative dose > 365 daily doses), other lipid-lowering drugs and controls that used no lipid-lowering medications. During the follow-up of up to 144 months, all-cause mortality was significantly reduced in the groups treated with high-dose statins: hazard ratio (HR) 0.44; 95% confidence interval (CI) 0.63-0.99. Furthermore, the high-dose statin group showed a significant reduction in coronary disease (HR 0.20; 95% CI 0.13-0.31), cerebrovascular disease (HR 0.14 [0.08-0.25]) and end-stage renal disease (HR 0.22 [0.16-0.29]). These effects were also seen in the low-dose statins group, but to a lesser extent (table 3). These HRs were adjusted for many confounders, including sex, age, socioeconomic status, hypertension, diabetes mellitus, chronic renal disease, medication use and mean number of hospital admissions (as a measure for disease activity and severity). However, smoking, alcohol and body weight were not corrected for because there were no data on these factors.27 An assessment of the study quality is given in table 4. The main shortcomings included the lack of correction for these remaining confounders, the fact that therapy compliance was unknown, the risk for selection bias and the non-randomised retrospective study design that complicates determination of causality. 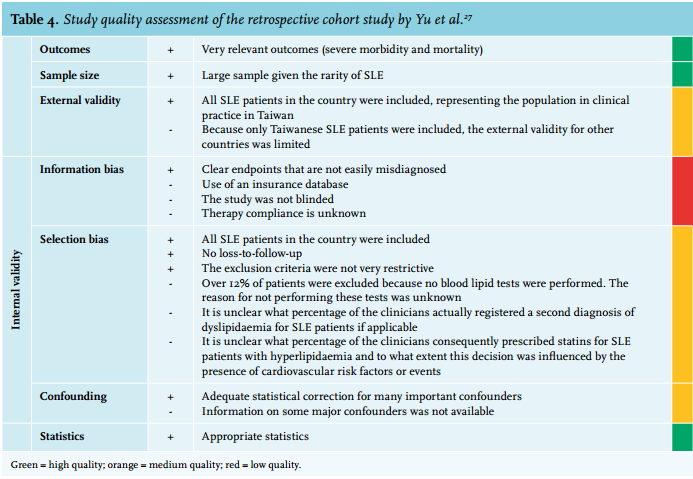 Pleiotropic effects
A recent meta-analysis showed that statin use did not affect SLE disease activity index scores across five studies with a follow-up ranging from 3-24 months.28 The concentrations of C-reactive protein (CRP) were also not influenced by three months of rosuvastatin treatment in 14 SLE patients with low baseline CRP concentrations (mean 5.2 mg/l).29 However, a meta-analysis that combined seven larger controlled studies, including a study on 12 months of rosuvastatin treatment, found that high-sensitivity (hs)-CRP levels significantly decreased upon statin treatment, supporting a beneficial effect of statins on SLE disease activity.28

Statin safety
In order to make a well-judged decision on a therapy, potential adverse effects should also be considered. In general, statins are associated with relatively few side effects. The most important adverse effects are increased serum liver transaminases in < 1% at standard doses and myopathy in up to 0.5% of users.30 Rhabdomyolysis was seen in only 0.023% of almost 40,000 statin users versus 0.015% in a similar number of controls.31 Furthermore, statins are safe in patients with impaired renal function, a common comorbidity in SLE.30 Very rare complications of statin use are the development of lupus-like disease, dermatomyositis, polymyositis and interstitial lung disease.32,33
Specifically in SLE patients, the rates of typical adverse effects of statins (such as muscle and liver toxicity) were not significantly increased in statin-treated SLE patients compared with the placebo-treated group in most studies,18-21,26 although one study reported an increased prevalence of elevated liver transaminases in the statin group.19

Premature atherosclerosis with subsequent CVD is an important cause of long-term morbidity and mortality in SLE patients. In this article, we reviewed the available evidence on the use of statins for prevention of CVD in SLE patients. Although data from prospective, randomised studies are lacking, there is a reasonable basis to support strict statin use in SLE patients with increased CVD risk similar to rheumatoid arthritis guidelines.
Most studies investigated radiological findings consistent with atherosclerosis18-20,22,24 rather than reductions in CVD and mortality, or concerned only a small subpopulation of SLE patients (after renal transplantation),26 and therefore cannot be directly extrapolated to reductions in cardiovascular events in the main SLE population. Current recommendations on statin treatment in SLE are therefore mainly dependent on the effect of statin use on CVD and mortality in a large Taiwanese SLE cohort with dyslipidaemia.27 However, a causal relationship cannot be established based on this study design. Furthermore, therapy compliance was unknown, selection bias could not be ruled out and correction or stratification for smoking, alcohol and obesity was not possible, which hampers the interpretation of the effects of statin use on the study outcomes. Therefore, prospective RCTs are required to substantiate these findings and to establish causality.
In a recent meta-analysis,28 statins were found to reduce the concentration of hs-CRP in SLE patients. Although SLE disease activity index scores remained unaffected, chronic (low-grade) inflammation is a major factor that contributes to premature atherosclerosis in rheumatic diseases7 and hs-CRP is associated with CVD in SLE.34-36 Furthermore, reduction of hs-CRP by rosuvastatin has been associated with a reduction of CVD events in the general population.37 Therefore, statins might be beneficial in patients with elevated hs-CRP.
Finally, from a safety perspective, statins can be safely prescribed for SLE patients.

In conclusion, the use of statins was associated with a large decrease in CVD and mortality, although causality still has to be proven. Furthermore, statins show a good safety profile and are widely used in people at risk in the general population and in patients with RA, where these drugs are safe and effective in reducing CVD.
These findings provide a reasonable basis to support strict guidelines for statin therapy for SLE patients with an increased risk of CVD. Since the risk of CVD in SLE patients surpasses that in RA patients, we highly recommend that SLE patients should be treated according to the current EULAR recommendations13 for cardiovascular risk management in rheumatoid arthritis. This implicates that a 10-year risk for CVD should be calculated by the Systemic Coronary Risk Evaluation (SCORE)38 or another prediction model and subsequently be multiplied by 1.5. Patients should then be treated accordingly using the national guidelines for cardiovascular risk management. Furthermore, statins may be considered for SLE patients without dyslipidaemia with elevated hs-CRP levels. Meanwhile, prospective RCTs that investigate the influence of statins on CVD and mortality in SLE patients are necessary to establish causality and further guide the treatment of SLE patients. Because of the expected high impact of statin use on morbidity and mortality, these studies should be conducted at short notice.

HL received consultancy fees from Shire, with no resulting conflict of interest regarding the contents of the current manuscript.