Ferric carboxymaltose (FCM) is a non-dextran iron complex that is composed of a ferric hydroxide core stabilised by a carbohydrate shell, carboxymaltose, allowing controlled delivery of iron to the target tissues.1 FCM is indicated for the treatment of iron-deficiency anaemia when oral iron preparations are either ineffective or not tolerated. The drug allows rapid and convenient repletion of iron stores and is generally well tolerated. Apart from rare anaphylactic reactions, adverse drug reactions are mild and include nausea (reported in approximately 7% of patients), hypertension (4%), flushing (3.5%), dizziness (2%), and vomiting (1.5%).1-3
Hypophosphataemia is another side effect of FCM.1 Transient decreases in serum phosphate occur in 3.7-58.8% of the general population and are mostly asymptomatic.1,4,7-10 Hypophosphataemia also occurs following intravenous administration of saccharated ferric oxide and iron polymaltose.4-6,8 The risk of developing hypophosphataemia appears to be greater with FCM as compared with other intravenous iron preparations.4,7-9 A decrease in phosphate concentration may be a reflection of cellular uptake of extracellular phosphate associated with a rapid expansion of erythropoiesis.11 However, fibroblast growth factor (FGF)-23 seems to be a more important factor in the hypophosphataemia induced by intravenous iron.9,10 Studies in iron-deficient women have demonstrated that parenteral iron reduces kidney phosphate reabsorption, promotes phosphaturia, decreases calcitriol concentration and that this is mediated by an increased concentration of FGF-23. FCM may reduce the cleavage of intact and biologically active FGF-23 (iFGF-23) after it is secreted by osteocytes.9,10
In contrast to patients receiving intravenous iron to correct iron deficiency caused by menstrual blood loss, inflammatory bowel disease, or bariatric surgery, chronic kidney disease (CKD) is characterised by unique, chronic, and profound alterations in phosphate and vitamin D metabolism. FGF-23 plays an important role in phosphate homeostasis and vitamin D metabolism. It induces phosphaturia and suppresses calcitriol synthesis.12-15 In CKD and haemodialysis patients, hyperphosphataemia rather than hypophosphataemia is the rule and relates to a reduced renal capacity to excrete dietary phosphate loads leading to increased concentrations of FGF-23. Blood concentrations of FGF-23 increase as kidney function declines, with haemodialysis patients having the highest concentrations.12,13,16 In CKD patients (both non-dialysis dependent and haemodialysis-dependent) the reported incidence of FCM-induced hypophosphataemia varies between 3.8% and 75%.17-19
Following successful kidney transplantation, some of the abnormalities in phosphate and vitamin D metabolism seen in CKD persist despite normalisation of kidney function. In many kidney transplant recipients, calcitriol concentrations remain low despite good graft function and hypophosphataemia occurs frequently. Several studies have suggested that persistent increases in plasma FGF-23 concentrations rather than tertiary hyperparathyroidism cause post-transplant hypophosphataemia.15,20
Only limited information on the safety of FCM in the kidney transplant population is available. At present, two cases of severe FCM-induced hypophosphataemia (necessitating hospital admission) after kidney transplantation have been reported. Only a single FGF-23 concentration was measured in one of these patients and found to be elevated.21,22 In the current study, we describe a series of kidney transplant recipients developing hypophosphataemia after intravenous FCM administration. The aim of this study was to investigate the incidence and severity of hypophosphataemia following a single dose of intravenously administered FCM after kidney transplantation. Our observations suggest that FGF-23-mediated kidney phosphate wasting is the most likely cause of this phenomenon.

Patients
In the Erasmus MC, University Medical Center Rotterdam, the Netherlands, approximately 200 kidney transplantations are performed each year. The number of kidney transplant recipients followed at our outpatient clinic is approximately 1900.
FCM (Ferinject®, Vifor Pharma Ltd., Switzerland) was approved to treat iron-deficiency anaemia in the Netherlands on 6 July 2007 and has been the iron preparation of choice in our unit since the spring of 2011. Two kidney transplant patients received FCM in 2013 and subsequently developed hypophosphataemia. In these index patients more extensive measurements related to phosphate homeostasis (including FGF-23) were performed and these two patients are described first. These observations led us to further analyse the relationship between the administration of a single dose of FCM and changes in the serum phosphate concentration. We retrospectively collected data of all kidney transplant recipients who received FCM intravenously between 1 January 2014 and 1 July 2015. Patients who were treated with FCM were identified by means of the electronic prescription and medication distribution system of the Erasmus MC through the department of hospital pharmacy. The two index patients were not included in this analysis.
In order to be included in this case series patients had to have 1) a functioning kidney transplant and 2) at least one serum phosphate concentration measured within three months after FCM administration. Kidney transplant recipients suffering from delayed graft function or a failed transplant and receiving dialysis treatment were not considered.
For all patients the following data were collected, if available: age, gender, primary kidney disease, date of transplantation, time after transplantation, kidney function and serum phosphate, calcium, calcidiol, calcitriol and parathyroid hormone (PTH) concentration.

Chemical analysis
Plasma creatinine and phosphate concentrations were measured as part of routine clinical care at the department of clinical chemistry of our hospital by the enzymatic creatinine23 and Molybdenum blue assays,24 respectively. Estimated GFR (eGFR) was determined by means of the CKD Epidemiology Collaboration (CKD-EPI) study equation.25 The fractional excretion of phosphate was calculated by multiplying phosphate in urine with creatinine in serum, divided by the multiplication of phosphate in serum with creatinine in urine, which was then multiplied by 100. PTH was measured by enzyme-linked immunoassay (Vitros ECi).26,27
Calcidiol and calcitriol were measured by means of a radioimmunoassay (DiaSorin and IDS, respectively).28,29 C-terminal FGF-23 (cFGF-23) was determined in EDTA plasma using the cFGF-23 immunoassay (Immunotopics), which measures both intact (and biologically active) FGF-23 (iFGF-23), as well as (inactive) C-terminal fragments of FGF-23.30 FGF-23 was measured in the fasting state. Because no assay to measure FGF-23 was operational in our hospital at the time of writing, it was measured by means of a validated assay in an external laboratory (Department of Clinical Chemistry, VU Medical Center).

Statistical analyses
Data are presented as mean ± standard deviation or median and range, depending on the distribution of the data. For comparison of variables before and after FCM administration, a paired t-test was used. Spearman’s rho was performed for rank correlation. The Mann-Whitney test and Chi-square with Yates’ correction were used to compare groups. A p value < 0.05 was considered statistically significant. 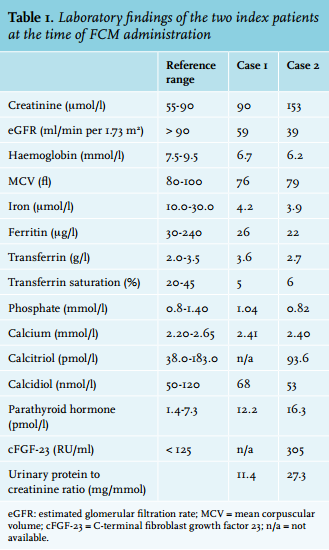 Case 1
A 42-year-old female of Indian descent received a first, pre-emptive, living-related donor, kidney transplant in May 2012 because of end-stage renal disease (ESRD) caused by hypertensive nephropathy. Some seven months after transplantation, iron-deficiency anaemia was diagnosed and considered to be the result of menstrual blood loss in combination with a strict vegetarian diet. She was started on oral iron supplements. Because of persistent iron-deficiency anaemia, she was treated with a single dose of 1000 mg FCM intravenously. At the time of iron infusion, she was treated with tacrolimus and mycophenolate mofetil (MMF). Her other medication consisted of ferrogluconate (695 mg/day), colecalciferol (25,000 IU/month) and amlodipine. Laboratory findings are listed in table 1.
Two weeks after an uneventful administration of FCM, her kidney function remained excellent (eGFR 67 ml/min per 1.73 mm2 ) and iron stores, haemoglobin and MCV had all normalised. However, considerable hypophosphataemia was noted (0.33 mmol/l; figure 1A). This was considered to be the result of renal phosphate wasting as the fractional excretion of phosphate was 34.1% (reference range < 5%) with an absolute urinary phosphate loss of ~1.4 g/day. She had no glucosuria, urinary pH was normal at 6, and there was no evidence for a plasma cell dyscrasia, arguing against a generalised tubular defect (aminoaciduria and plasma bicarbonate were not determined). The calcium concentration was 2.30 mmol/l, calcidiol and calcitriol concentrations were within the normal range (66 nmol/l and 100 pmol/l respectively). PTH had increased slightly (14.5 pmol/l). The cFGF-23 concentration was elevated at 160 RU/ml (reference range < 125).
The patient did not receive any additional treatment. Two months after intravenous FCM administration, the serum phosphate had normalised to 0.80 mmol/l. The PTH concentration had returned to baseline (12 pmol/l), calcidiol remained within the reference range (53 nmol/l) and calcitriol concentration had increased, although it remained within the reference range (168 pmol/l). cFGF-23 decreased to the reference range (106 RU/ml).

Case 2
A 70-year-old Caucasian male received his first, pre-emptive, living-unrelated donor, kidney transplant in March 2013 because of ESRD caused by hypertensive nephropathy, possible glomerulonephritis in the 1940s, and nephrolithiasis. In addition, he underwent a right-sided hemi-colectomy three years prior to transplantation because of adenocarcinoma of the ascending colon. Some five months after transplantation, iron-deficiency anaemia was diagnosed and considered to be caused by chronic blood loss due to a benign ulceration at the site of the neo-ileo-colonic anastomosis. He received a single dose of 1000 mg FCM intravenously followed by oral iron supplementation for the duration of one month. Some nine months after transplantation and approximately three months after his first FCM administration, recurrent iron-deficiency anaemia was diagnosed. It was decided to treat the patient with a second administration of 1000 mg FCM. At this time, he was treated with tacrolimus, MMF, prednisolone, esomeprazole, trimethoprim/ sulfamethoxazole, amlodipine and acenocoumarol. In addition, he received 0.25 μg of alphacalcidol because of persistent hyperparathyroidism (PTH 16 pmol/l). Laboratory results are listed in table 1.
Three days after an uneventful FCM infusion, the serum phosphate concentration had dropped to 0.53 mmol/l and decreased further to a nadir of 0.36 mmol/l ten days after FCM infusion (figure 1B). There was marked renal phosphate wasting with a fractional excretion of phosphate of 52.7% and 75.1% three and ten days after infusion, respectively. The FGF-23 concentration increased up to 1190 RU/ml three days after the infusion. Kidney function remained stable at 43 ml/min per 1.73 m2. The calcium concentration was 2.32 mmol/l. The calcidiol concentration was within the normal range (57 nmol/l), but the calcitriol concentration declined significantly (57 pmol/l). PTH concentration had increased to 19 pmol/l. There was no glucosuria or proteinuria on urinalysis.
The patient did not receive additional treatment. Two and half months after the second FMC administration, serum phosphate concentration had increased to 0.68 mmol/l. The PTH and calcitriol concentration had returned to baseline (16 pmol/l and 98 pmol/l), while calcidiol remained normal (52 nmol/l). The fractional excretion of phosphate and cFGF-23 concentration decreased to 19.3% and 271 RU/ml, respectively. 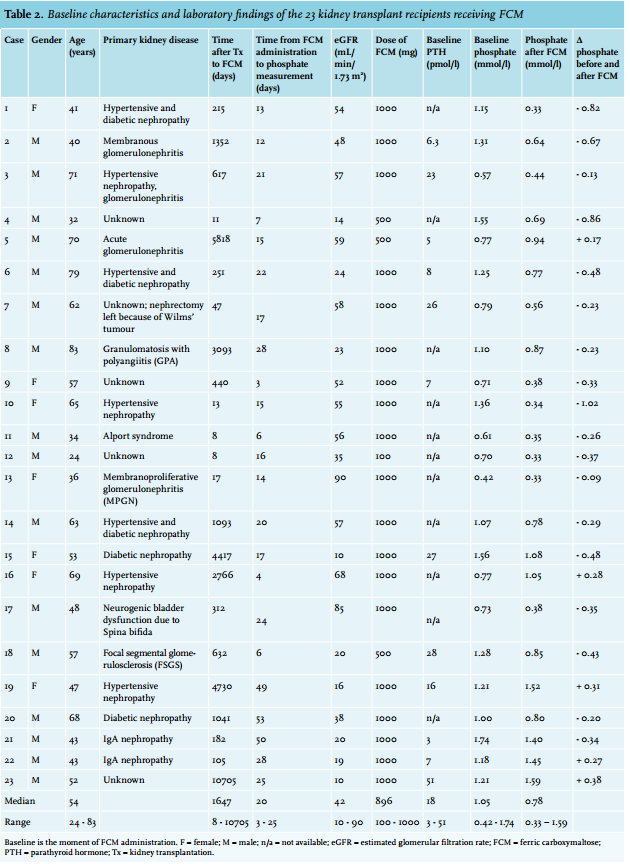 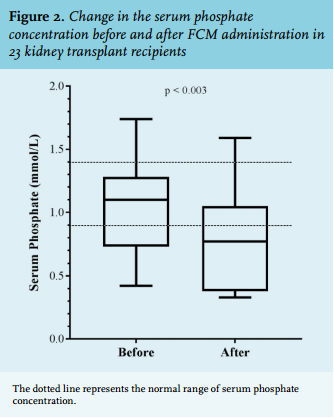 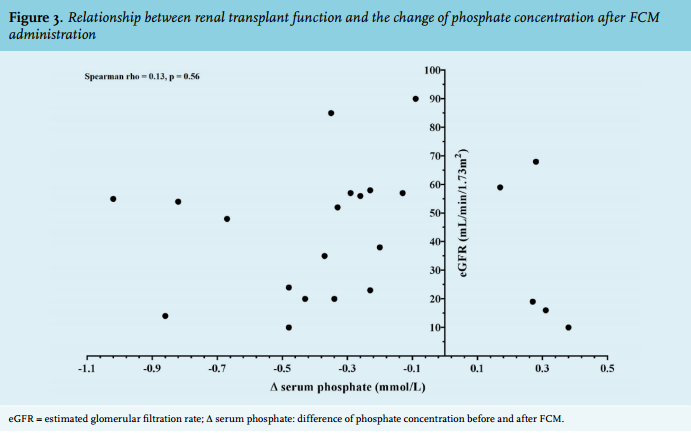 Correction of iron-deficiency anaemia after kidney transplantation with FCM may induce renal phosphate wasting and hypophosphataemia in as many as 56.5% of patients. This phenomenon may be explained by increased concentrations of FGF-23. The hypophosphataemia following a single dose of FCM administration was transient. Nonetheless, prudent use of FCM seems warranted and close monitoring of such patients seems advisable, especially when chronic therapy with FCM is indicated.

The authors declare that they have no conflict of interest and no relevant financial interests.