Answer to Photo Quiz: A 34-year-old man with back pain

The CT scan revealed an infarction of the lower pole of the right kidney as the cause of the acute back and flank pain. There were no signs for urolithiasis. Renal infarction can be the result of a thromboembolism,1 but echocardiography and CT scan of the aorta did not show any embolic source. In addition, hypercoagulability tests (including anticardiolipin antibodies and lupus anticoagulant) were normal and we found no other clues for vasculitis. As we suspected a renovascular cause we performed diagnostic digital subtraction angiography of the renal arteries (figure 2). This shows multifocal fibromuscular dysplasia (FMD) of both renal arteries and occlusion of one of the intrarenal branches of the right renal artery. FMD is a non-atherosclerotic, non-inflammatory vascular disease and a common cause of renovascular hypertension.2 It is a common misconception that FMD exclusively occurs in young, tobacco-smoking women, which is (as this case underscores) certainly not the case. Although renal infarction is a rare complication of FMD, FMD should be considered if alternative causes for infarction are lacking. Although embolisation of intravascular thrombi from aneurysmal segments has been suggested as the proposed mechanism in FMD-related renal infarction,3 it is more likely that spontaneous dissection (a common complication of FMD)4 is the cause in this case. The dilated intrarenal vessel on the angiogram is presumably the false lumen of the dissected artery, which compresses the true lumen, resulting in occlusion of its arterial branches. In this case we decided to refrain from endovascular treatment as the patient was already free from pain at the moment of angiography and there were no signs of hypertension or renal insufficiency, the two indications for intravascular treatment. Therefore, endovascular treatment would not provide any benefit, while the risk for procedure-related dissection is considerable. 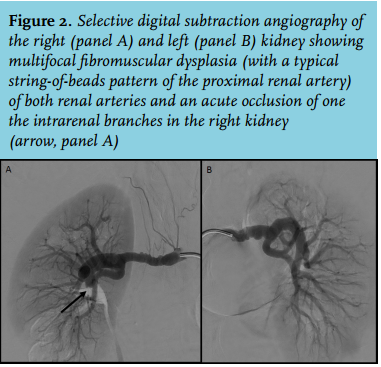