Answer to Photo Quiz: Fever and painful skin lesions after a holiday in Gambia

Based on the clinical image, myiasis with secondary bacterial cellulitis was diagnosed. The larvae were removed by applying gentle pressure to the tissue surrounding the furuncles (figure 2) and patient was treated with co-amoxiclav (according to the local protocol for the treatment of cellulitis caused by an unknown causative organism) upon admission to our hospital. He recovered well and was discharged in good condition three days later. Myiasis is an infection due to dipteran larvae (maggots), from Dermatobia hominis (human botfly) and Cochliomyia hominivorax (New World screwworm) in South America, as well as from Cordylobia anthropophaga (tumbu fly) in Africa.1,2 The disease is mostly seen in travellers returning from South America and sub-Saharan Africa.1,2 While infection of the skin leads to cutaneous furuncular myiasis or wound myiasis, the larvae can also infect natural body orifices or lead to internal infections (e.g. gastrointestinal, urogenital). Fever is not a classical presenting symptom, but may reflect the presence of a secondary bacterial infection as may arise due to (auto)manipulation. Therapy consists of removal of the larvae, which should preferably be done by occlusion of the opening (e.g. by applying petroleum jelly/vaseline or nail polish). Due to the risk of partial removal of the larvae, manual or surgical extraction should only be performed if occlusive therapy fails.2,3 Surgical extraction is the initial treatment of choice in cases of ocular involvement and scalp infestations in very young children due to the risk of a potentially fatal cerebral myiasis.3 Secondary bacterial infection should be prevented by treating the wound locally with an antiseptic and, if there is high suspicion of secondary bacterial infection, treated with antibiotics aimed at the eradication of skin pathogens (e.g. flucloxacillin).2 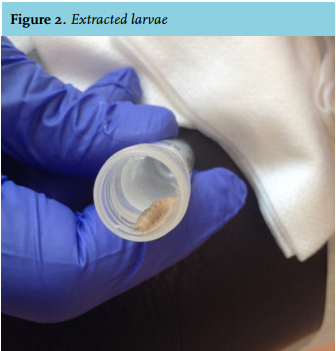