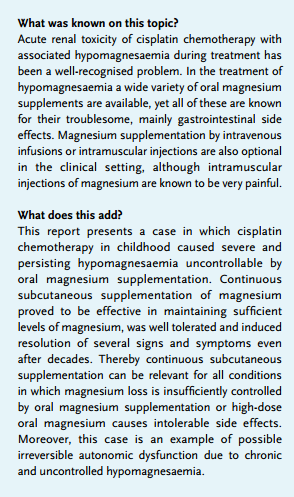 Hypomagnesaemia has been reported as a common side effect during and in the period directly following treatment with cisplatin chemotherapy.1,2 However, severe and persistent tubulopathy causing chronic magnesium wasting many years after cisplatin chemotherapy is rarely seen.3,4 Hypomagnesaemia has a variety of manifestations, including gastrointestinal symptoms, muscle weakness, muscle cramps, arrhythmia and fatigue. Furthermore, chronic hypomagnesaemia is associated with other electrolyte disturbances, hypertension, atherosclerosis and osteoporosis and it can even cause severe cardiac, neuromuscular and cerebral symptoms.5,6 Oral supplementation in cases of severe hypomagnesaemia can be insufficient and can lead to intolerable, mainly gastrointestinal side effects.7-9 Intravenous administration of magnesium is used in some clinical settings, yet this is not feasible as a long-term solution for chronic and severe hypomagnesaemia.10 Intramuscular or subcutaneous supplementation of magnesium administration is uncommon in clinical practice and rarely reported, yet these few reports mention its efficacy and tolerability.11,12 Through this case alternatives for oral or intravenous routes of magnesium administration were explored, in order to achieve long-term adequate levels of magnesium without troublesome side effects.

We present a case of a 39-year-old woman with a history of osteosarcoma of the right knee at the age of eleven. Rotationplasty was performed and subsequent cisplatin-based chemotherapy was started. Following treatment she developed symptoms such as cramps mainly affecting the hands, headaches, the feeling of light headedness, altered consciousness and fainting. At the age of 24 low levels of magnesium in her blood were detected (ranging between 0.32 and 0.48 mmol/l), whereas the magnesium levels before treatment with cisplatin were documented to be within the normal range (table 1). Subsequently, oral magnesium supplementation was prescribed. Irrespective of the type of oral formulation used (including magnesium gluconate, with relative good bioavailability) this was insufficient to correct the hypomagnesaemia and her clinical symptoms as well as side effects persisted.
In order to study magnesium homeostasis in detail and find an adequate way to administer magnesium that would maintain a sufficient level of serum magnesium and be feasible for the long term, the patient was referred and admitted to our hospital.
Physical examination revealed a healthy appearing young female. Persistent tachycardia at rest (120-130 beats/ min) was present and a positive Trousseau sign appeared during blood pressure measurement. Laboratory findings and medication on presentation are shown in table 1. Notably, in addition to hypomagnesaemia, hypophosphataemia and hypokalaemia were remarkable. Urine examination confirmed magnesium excretion related to the supplementation dose, demonstrating the inability of the kidney to retain the exogenous magnesium that was supplemented (figure 1A). Because of the unusual persisting severity of magnesium losses, additional genetic tests for Gitelman, Bartter 3 and Claudin 16 mutation were performed but revealed no abnormalities. Electrophysiological examinations demonstrated polyneuropathy and autonomic dysfunction. Although extensive neurological assessment was performed, no other explanation for the polyneuropathy and autonomic dysfunction was found apart from the chronic hypomagnesaemia.
To increase reabsorption of magnesium by different mechanisms at several sites of the nephron, low salt diet, acetazolamide and amiloride were consecutively tested, yet all of these interventions were without substantial effect on the magnesium excretion in the urine. Furthermore, magnesium excretion did not respond to hydrochlorothiazide nor did chloride excretion (analysis through a standardised ‘thiazide test’), suggesting irreversible damage to the distal tubules as site of magnesium loss.13,14
Subsequently, continuous high-dose intravenous infusion of magnesium was shown to be effective in increasing magnesium levels to the normal range and was well tolerated, demonstrating a proof of principle that a high dose of supplementation can overcome renal losses. Following this, incremental doses of magnesium sulphate 20% were administrated intramuscularly, subsequently changed to magnesium sulphate 50% to reduce the volume of injections. Although adequate levels of magnesium were achieved through intramuscular administration with additional reduction of some symptoms, the injections were quite painful and caused extensive haematomas. Addition of lidocaine 1% to the magnesium sulphate solution did not reduce pain at the injection site.
Therefore, a trial of continuous subcutaneous magnesium administration was started. Because magnesium is known to be extremely irritative and painful when injected in tissue, a dilution of magnesium together with lidocaine was used. An insulin pump with a subcutaneous needle enabled continuous supplementation of magnesium sulphate 50% combined with lidocaine 2% (2:1 ratio), resulting in a total supplementation of 5 grams of magnesium per 24 hours. With this approach it was possible to achieve an adequate and stable level of magnesium (figure 1B, following a combination of adequate intramuscular and intravenous and oral magnesium supplementation). This approach was well tolerated by the patient with acceptable local and no systemic side effects. Therefore, continuous subcutaneous magnesium supplementation was successfully extended towards home practice with a suitable pump system that had to be refilled only once a day, composed of 10 ml magnesium sulphate 50% together with 3 ml lidocaine 2%, running 0.6 ml/ hour. Local pain at the insertion site was prevented by mixing a magnesium solution with lidocaine. The location of the subcutaneous needle insertion had to be switched regularly in order to prevent subcutaneous skin lesions and painful congestions.
Magnesium values have been normal ever since, for more than two years of follow-up. Most, but not all symptoms responded well to this therapy. Symptoms such as level of energy, muscle cramps, paraesthesia, hyperventilation, agitation, painful bones and fainting improved remarkably. Yet, some symptoms such as palpitations, light headedness, rigid muscles and insomnia did not show an apparent improvement. Long-term effects of subcutaneous magnesium administration in this case are mild skin lesions at the insertion site, i.e. small and non-painful, indurated areas. 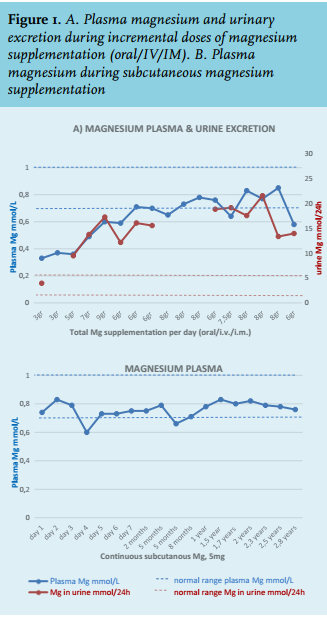 Magnesium loss caused by cisplatin chemotherapy treatment is generally transient, probably due to regeneration of the renal epithelium.15,16 This case is an example of persistent and severe magnesium loss after treatment with cisplatin, which has only rarely been reported.3
Oral magnesium supplementation was not sufficiently effective or tolerable and therefore other, parenteral routes of magnesium were explored. Intramuscular injections of magnesium concentrate were effective, yet too painful because of the high concentration to minimise volume load. Continuous subcutaneous magnesium administration proved to be efficacious, maintaining magnesium concentrations in the normal range in the long term with acceptable tolerability. In addition, this case illustrates additional electrolyte disturbances of both potassium and renal phosphate loss. Moreover, this case shows that long-term magnesium depletion might induce autonomic dysfunction. Unfortunately, despite long-term normalisation of the magnesium, the symptoms of autonomic dysfunction turned out to be irreversible.
The patient discussed in this case experienced symptomatic hypomagnesaemia, yet the need for magnesium supplementation should be well considered if the hypomagnesaemia is mild or asymptomatic.17 Robinson et al. reported subjective and objective improvement of magnesium-related symptoms and values, respectively, in patients with chronic hypomagnesaemia due to Gitelman syndrome with the use of slow-release magnesium lactate. Generally, however, serum magnesium concentrations are a poor reflection of total magnesium stores. Moreover, it is unknown if symptoms are the consequence of low magnesium concentration or low total magnesium stores. Based on these considerations it is difficult to provide generally applicable recommendations.
Our case demonstrates the feasibility of continuous subcutaneous magnesium administration as an innovative route of magnesium supplementation due to renal losses. This approach may also be applicable in other medical conditions characterised by magnesium losses, such as Crohn’s or Gitelman’s disease, where oral supplementation fails.