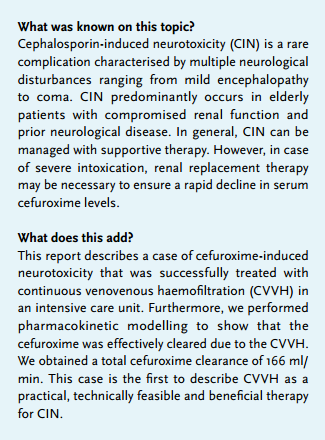 Cefuroxime is a semi-synthetic second-generation cephalosporin. It has a molecular weight of 446 D, a volume of distribution (Vd ) of 9.3-12.8 l, and an elimination half-life ranging between 61.6-80 minutes. It is 33-41% protein bound and predominantly (95%) excreted unchanged in the urine.1,2
Cephalosporins, especially cefepime, ceftazidime, and cefuroxime, are associated with neurological disturbances such as mild encephalopathy, status epilepticus, and coma.3,4 Elderly patients with renal insufficiency and prior neurological disease are prone to the development of cephalosporin-induced neurotoxicity (CIN). Management of CIN comprises cessation of cephalosporin use, initiation of anticonvulsive therapy if indicated, and intermittent haemodialysis in those with compromised renal function.4
In general, in haemodynamically unstable ICU patients with oliguric/anuric acute kidney injury, continuous venovenous haemofiltration (CVVH) is the preferred method of renal replacement therapy.5 Due to its low molecular weight, low protein binding and low Vd, cefuroxime has a high removal rate; therefore, it is expected that serum cefuroxime levels will normalise rapidly to prevent severe neurotoxicity.6
We describe a patient with cefuroxime-induced neurotoxicity who was successfully treated with CVVH and regional citrate anticoagulation. Pharmacokinetic parameters were calculated using MwPharm 3.86 software (MwPharm BV, Zuidhorn, Netherlands).

A 61-year-old woman (height 174 cm; weight 80 kg) with a history of chronic obstructive pulmonary disease (Gold IV), type II diabetes mellitus, seronegative rheumatoid arthritis and contracted kidneys was admitted to our hospital. She had suffered a 14-day fever, right flank pain and acute-onchronic renal insufficiency (serum creatinine 199 µmol/l). She had rose-coloured, cloudy urine.
Abdominal computed tomography scan showed right-sided urolithiasis with urethral obstruction and pelvic dilatation; therefore, a nephrostomy catheter was placed in her right kidney. Intravenous cefuroxime (1500 mg, 3 times daily) and a single dose of gentamicin (400 mg) were administered for suspected urinary tract infection. After four days with clinical improvement, her urine production decreased and the serum creatinine increased (316 µmol/l). Pus (P. mirabilis) was observed in the catheter; therefore, two more nephrostomy catheters were placed to drain a suspected pyonephrosis.
Nine days after admission, neurological examination showed a decline in the Glasgow Coma Scale score (E3 M5 V4), horizontal nystagmus, myoclonus and tremors, which necessitated ICU admission. Laboratory examinations showed the following: serum creatinine 440 µmol/l; C-reactive protein, 95 mg/l; leucocyte count, 15.8 X109/l; and serum albumin level, 17 g/l. CIN was suspected and, therefore, cefuroxime was discontinued and CVVH (Prismaflex®) with citrate anticoagulation was started with an AN69ST filter. Blood flow and net ultrafiltration were set at 180 ml/min and 0 ml, respectively. Prismocitrate® and Prismasol® were delivered prefilter and postfilter (2640 and 400 ml/hour, respectively). Plasma cefuroxime concentration at CVVH initiation was 173 mg/l and rapidly declined over the next few hours (figure 1). The next day, her general condition improved and all the neurological symptoms resolved completely. Before and after CVVH initiation, total cefuroxime clearance was 11 and 166 ml/ min, respectively (figure 2), Elimination half-life was 16.8 and 2.6 hours, respectively. Vd of the central compartment was 9.4 l/kg and total Vd was estimated to be 15-20 litres. 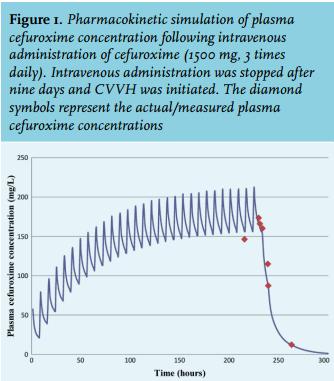 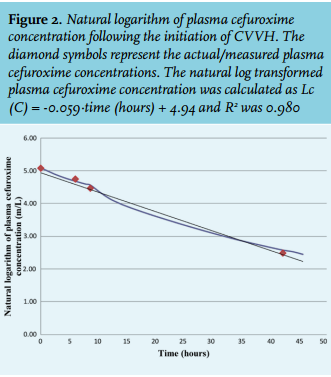 We report the case of a critically ill patient with cefuroxime-induced neurotoxicity due to acute-onchronic renal insufficiency, who was successfully treated with CVVH. CVVH was preferred over intermittent haemodialysis because of haemodynamic instability and practical feasibility. As this type of renal replacement therapy is frequently used in the ICU, it is important to show proof of principle in ICU patients. This is because most published reports describe only intermittent haemodialysis as the rescue therapy for CIN.7
The most remarkable finding from toxicokinetic assessments was a rapid decrease in plasma cefuroxime levels to non-toxic levels as a result of the CVVH, which led to a full clinical recovery. We also found that 100% of the 1500-mg single dose of cefuroxime was removed within 2.5 hours following the initiation of CVVH indicating effective cefuroxime removal during neurotoxicity.
There are several possible explanations for the results of the pharmacokinetic assessment. Firstly, the pharmacokinetic characteristics of cefuroxime, including its low molecular weight, hydrophilicity, low Vd and low protein binding, made cefuroxime easily accessible for its clearance during CVVH. Secondly, changes in the protein binding of cefuroxime and thus cefuroxime displacement favours convective clearance during CVVH. The displacement can be caused by acidosis or the levels of bilirubin, uraemic inhibitors, free fatty acids or other displacing drugs in the blood.6 Thirdly, we observed an increase in total Vd , which is frequently observed in critically ill patients due to capillary leak and oedema. These might have contributed to cefuroxime removal.8 Because of persistent anuria, clearance by the native kidneys was nil. Furthermore, in a previous study adsorption of cefuroxime by the haemofilter was found insignificant in a similar cohort of patients.9
Other possible factors that might have contributed to the total body clearance of cefuroxime during the CVVH were the use of a haemofilter with a larger membrane surface area, a higher blood flow and a higher effluent rate than those used in previous studies. Reports on CIN are uncommon and our finding of an extremely high cefuroxime peak level of 173 mg/l is unique. A previous study reported that, immediately after a 1.0-g bolus injection of cefuroxime was administered to healthy adults, the mean peak plasma concentration of cefuroxime was 99.2 ± 9.6 mg/l. The study also reported that the peak concentrations were not associated with any adverse effects. However, exposure to high concentrations of cefuroxime for a prolonged time might increase the susceptibility to neurotoxicity as was observed in our patient.10 Dose adjustments are not necessary in a steady state, especially when cefuroxime is administered continuously. It is advised to measure the serum concentration once to be sure that the concentration is in the effective but not in the toxic range. However, changes in renal function may mandate adjustments.9
A limitation of the present case is that we did not measure the pre- and post-filter cefuroxime levels; therefore, we could not calculate the sieving coefficient of the haemofilter employed. This also makes it unfeasible to calculate the endogenous and extracorporeal cefuroxime clearances. Finally, we did not correct for protein-bound cefuroxime in plasma.

This is the first case to describe CVVH as a practical, technically feasible, safe and effective alternative to acute haemodialysis in cefuroxime-induced neurotoxicity concomitant with anuric renal failure. We showed that the central (vascular) compartment acts as a reservoir of cefuroxime due to the high cefuroxime fraction that is unbound. In addition, the pharmacokinetic analysis was useful in monitoring the concentration and effective clearance of cefuroxime.