Answer to Photo Quiz: A black umbilicus in a patient with a decompensated liver cirrhosis

A liver ultrasonography was performed, which showed progression of the HCC lesions in the right and left liver lobe. A solid structure was visible in the portal trunk and there was absence of the Doppler sign in the intrahepatic and extrahepatic part of the portal vein extending to the confluence of the superior mesenteric and splenic vein, consistent with an extensive extrahepatic and intrahepatic portal vein thrombosis. In addition, a recanalised umbilical vein was seen, which drained into the left intrahepatic branch of the portal vein. Doppler flow was absent, consistent with umbilical vein thrombosis (UVT). In retrospect, MRI of the liver performed a year earlier in the context of his HCC had already shown recanalisation of the umbilical vein with adequate flow at that time (figure 2). Liver cirrhosis and hepatobiliary malignancies are well-known precipitating factors for portal vein thrombosis, both of which were present in our patient. In addition, three months earlier he underwent surgery with a mesh repair because of a strangulated umbilical hernia, which may have added to a local prothrombotic environment.
UVT is a rare clinical entity, which appears to be caused by the local tumour and related to portal vein thrombosis. The first case report dates from 1986. In a heavy drinker with HCC, fine needle biopsy of a thrombus in a patent umbilical vein was shown to be consistent with HCC.1 A more recent study demonstrated HCC tumour thrombus in a recanalised umbilical vein in a patient with liver cirrhosis, primary liver cancer and portal hypertension.2 Chang et al.3 examined 431 consecutive HCC patients for UVT by ultrasound within one week of HCC diagnosis. Nine of these patients were found to have UVT (2.1%), all of which had a combination of HCC left lobe invasion and left portal vein thrombosis, as was the case in our patient. They suggest a potential mechanism in which HCC spreads into the left lobe and subsequently infiltrates the left portal vein and disseminates into the recanalised umbilical vein causing thrombosis. None of previous case reports describe the distinctive appearance of the umbilical vein, which we hypothesise is due to necrosis as a result of venous congestion of the para-umbilical veins. Little is known about the prognosis of UVT. Chang et al. report a median survival of 25 days, survival in the patient described by Livraghi et al. was seven weeks. This poor prognosis is not necessarily caused by the UVT itself, but may also be due the advanced stage of the liver disease. Anticoagulation would be the treatment of choice, but is not without risk in light of high risk of bleeding in patients with portal hypertension. In our patient anticoagulation was contraindicated because of a high bleeding risk based on recent intra-abdominal bleeding. He developed progressive liver failure and died six days after admission. Autopsy was not performed. 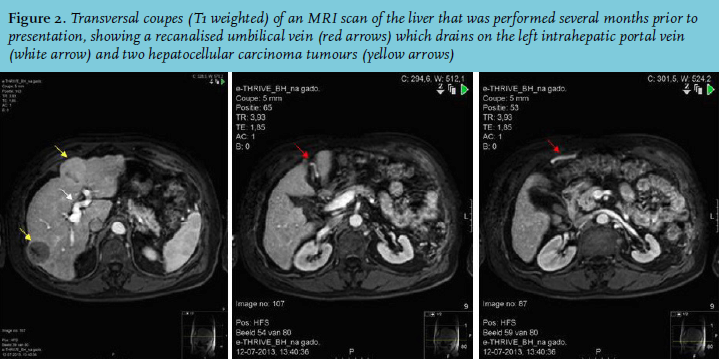