A novel mutation in mitochondrial DNA in a patient with diabetes, deafness and proteinuria

Maternally inherited deafness and diabetes (MIDD) is characterised by both a defect in insulin secretion and sensorineural hearing loss.1 The phenotypic expression is variable; mean age of onset is between 30 and 40 years. Other abnormalities commonly associated with MIDD include macular retinal dystrophy, myopathy, cardiac disorders, renal disease (particularly focal segmental glomerular sclerosis, FSGS), short stature, and gastrointestinal disease.2 Over 85% of MIDD is caused by the mtDNA A to G mutation at nucleotide position 3243 in transfer RNA.1 In this report we describe a new mitochondrial DNA mutation causing MIDD.

A 28-year-old Caucasian woman presented with metabolic syndrome consisting of central obesity, hypertension, hypercholesterolaemia, impaired glucose tolerance and proteinuria of 3.6 grams a day. A kidney biopsy revealed FSGS. There was no hypoalbuminaemia and therefore the FSGS was thought to be secondary. She was treated with conventional therapy including an angiotensin receptor blocker and statin. One year later bilateral sensorineural hearing loss was diagnosed and she developed overt diabetes with no detectable islet cell or glutamic acid decarboxylase (GAD) antibodies. The diabetes was treated with oral medication; however within time she required insulin. Fundus examination was normal. All these years she had abdominal symptoms with diarrhoea, fatigue and muscle cramps during exercise. Family history revealed that her mother had gestational diabetes, a benign brain tumour and died after a haemorrhagic cerebrovascular accident. Due to the combination of diabetes, deafness and kidney disease, underlying MIDD was suspected. However, the m.3243A>G mutation which causes MIDD in over 85% of the cases was not detectable. Therefore, whole mtDNA sequencing was performed with the Ion Torrent PGM method (detection level of 1% with an accuracy of 0.5%) which revealed a heteroplasmic m.09155A>G mutation (p.Gln210Arg in MT-ATP6). The percentage of heteroplasmy in urine was higher than in blood (55% vs. 28%). She achieved only 65% of the expected distance on the 6-minute walk test. A muscle biopsy of the quadriceps muscle was performed. Histology demonstrated increased fatty vacuoles as often seen in mitochondrial disease. Electron microscopic examination showed abnormal mitochondria with lipid vacuoles (figure 1). Biochemical analyses of the muscle demonstrated normal ATP production (23.6 nmol/h.mUCS, reference value: 15.4-30.2 nmol/h.mUCS). There were no enzyme abnormalities; complex V levels (ATPase) were normal (314 mU/UCOX, reference value: 84-365 mU/UCOX). The heteroplasmy level of the m.09155A>G mutation in muscle was 64%.
Her asymptomatic half-sister, sharing the same mother, was also tested, and did not carry the mutation. Metformin and statin were discontinued because of anticipated side effects in mitochondrial disease. This resulted in less muscle cramps. 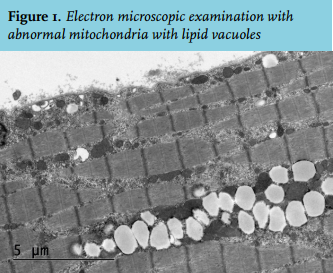 Over 90% of the patients with diabetes have metabolic syndrome-associated type 2 diabetes, auto-immune type 1 diabetes accounts for another 5-10% and the remainder is due to other causes including genetic defects in mitochondrial DNA. Mitochondrial diabetes generally presents as an unremarkable form of diabetes. The suspicion of mitochondrial diabetes needs to be raised by a very strong family history of diabetes and deafness in combination with the suspicion of maternal inheritance. Mitochondrial genetic studies confirm the diagnosis of mitochondrial diabetes. In the majority of patients with mitochondrial diabetes an A to G substitution at position 3243 (m.3243A>G) of the mtDNA encoding for tRNA is found.3 Overlapping symptoms in patients with an m.3243A>G mutation suggests a spectrum of expression ranging from hearing loss and diabetes alone, to MIDD, to mitochondrial encephalomyopathy with lactic acidosis and stroke-like episodes. MIDD is found in 0.5-2.8% of diabetic patients.1 In MIDD, less than 15% of the cases are caused by mitochondrial mutations other than the m.3243A>G mutation.2 Undetectable islet cell and GAD antibodies made the diagnosis of late-onset type 1 diabetes unlikely in our case. The positive family history and constellation of symptoms in our patients raised the suspicion of MIDD. With whole mitochondrial sequencing we found a novel mitochondrial mutation in a patient with the MIDD phenotype, the m.155A>G mutation. This mutation is not described in the mitomap database and is predicted as pathogenic by the mutation prediction software (AlignGVGD, Polyphen and SIFT). The fact that her sister does not carry the mutation and the findings from histology and electron microscopic examination of the muscle biopsy strengthens the suspicion that this is a new pathogenic mutation. Biochemical analyses were normal; however, it is known that mutations in ATP6 only cause in vitro biochemical abnormalities in higher heteroplasmy values.

The proportion of mutant mtDNA in the blood of MIDD patients may vary from 1-40%.3 Moreover, levels of heteroplasmy may differ between tissues from a single individual and may fall with age.4 Heteroplasmy probably explains the large variation in phenotype found in patients.5,6 The mother of our patient had a history of gestational diabetes. Maternal transmission may not be evident when the mutation load is below the threshold required to cause symptoms. Also, mutations in mtDNA may be sporadic.7 The level of mtDNA is lowest in blood leucocytes, although this test is most used by laboratories. Therefore, other diagnostically accessible tissues such as urine and mouthwash samples can be used when the level of heteroplasmy is too low to detect or too low to explain the symptoms in blood leukocytes.8-10 Our patient had a heteroplasmy level of the m.09155A>G mutation of 55% in the urine and 64% in muscle, which was significantly higher than the 28% measured in the blood leucocytes.
With regard to the treatment of MIDD, there is no specific disease-modifying therapy available. In general, drugs that may interfere with the respiratory chain function should be avoided in patients with mitochondrial disorders. Mitochondrial diabetes is treated as other forms of diabetes; however, the use of metformin should be avoided due to the increased risk of lactic acidosis.

A family history of diabetes and deafness should prompt genetic testing for mitochondrial diabetes. The most found mutation in MIDD is m.3243A>G although 15% of cases are caused by other rare mutations. Our patient presented with symptoms associated with MIDD. Whole mitochondrial DNA sequencing showed an m.09155A>G mutation. This mutation has never been described before as being associated with MIDD.

We thank Dr. Küsters, pathologist at the Radboud University Medical Center in Nijmegen, the Netherlands for providing figure 1.

The authors have no conflicts of interest or financial disclosures to report.