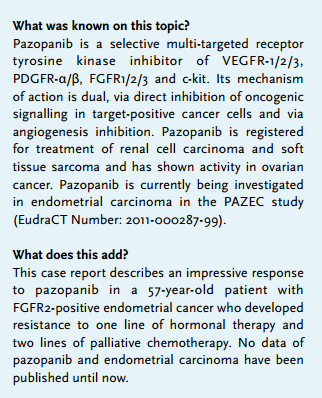 The first two authors contributed equally to this work

Endometrial carcinoma is the most common gynaecological malignancy in developed countries. Worldwide incidence is estimated at 290,000 patients per year and the incidence is rising. In the Netherlands it is diagnosed in approximately 1900 women each year. Usually the disease is diagnosed early with symptoms such as postmenopausal vaginal bleeding or an atypical bleeding pattern1-3 and therefore the prognosis in general is good.
Approximately 20% of the patients with endometrial carcinoma present with regionally extended disease and 8% of them have distant metastases. In patients with early stage disease effective treatment consisting of surgery with or without radiotherapy can be given. In patients with high risk or advanced endometrial carcinoma, the prognosis is much worse, resulting in more extensive treatment with frequent addition of chemotherapy. Once disease recurs outside the pelvis, cure is impossible and palliative treatment remains. Systemic palliative treatment consists of either hormonal therapy or chemotherapy.3 Despite good initial response rates, the disease will finally progress and prognosis after recurrence is poor. Moreover, patients with endometrial cancer frequently have comorbidities prohibiting multi-agent chemotherapy. New approaches are therefore needed.

The PAZEC study is a multicentre, open-label, non-randomised phase II study which investigates the use of pazopanib in patients with chemotherapy-resistant endometrial carcinoma or patients for whom chemotherapy is contraindicated. The study is subdivided into two stages. If after stage I (n = 15) > 6 patients are free of progression the study will continue and proceed to stage two (n = 46). If at the end of the study > 18 patients are free of progression the study will be positive. Currently the inclusion is closed and results are expected at the end of this year. We think this trial might be positive and present a patient with a metastatic endometrial carcinoma who was treated with pazopanib.

A 57-year-old patient presented in 2009 with a FIGO stage IIb grade II endometrioid adenocarcinoma of the endometrium for which she underwent a bilateral salpingo-ophorectomy and a total abdominal hysterectomy. Postoperatively she received adjuvant radio-chemotherapy according to the PORTEC-3 protocol, which contained a total of two cycles cisplatin 50 mg/m2 on day 1 and 22 during radiotherapy and four cycles of carboplatin AUC 5 and paclitaxel 175 mg/m2 every three weeks. The cisplatin was combined with 27 fractions of 1.8 GY radiotherapy. After completion of this regimen she remained in remission for two years.
In 2011, the disease recurred with an abdominal wall metastasis and para-aortic lymph node metastases. Since the tumour expressed oestrogen and progesterone receptors, the patient was treated with 200 mg medroxyprogesterone acetate. After two months, progressive disease was diagnosed. She restarted with six cycles of carboplatin and paclitaxel resulting in a partial response. When, in February of 2012, two months after discontinuation of chemotherapy, the disease progressed, the chemotherapy schedule was intensified to a weekly scheme of carboplatin and paclitaxel, with initial response after three months but progression after six months. At that point she had a reddish-purple abdominal wall metastasis of 7 x 6 cm. Surgery was technically not feasible according to the surgeons and gynaecologists, so she was informed about the PAZEC study. After signed informed consent was given, she started on pazopanib 800 mg once daily.
Two days after starting pazopanib the patient noticed a change in the abdominal wall metastasis. It looked as if it had broken through the skin and there was leakage of bloody exudate from the wound.
Two weeks after starting pazopanib there was a defect in the abdominal skin of 4 x 2.5 centimetres, in which a necrotic tumour mass was visible (figure 1 and 2).
Based on the apparent potent antitumor activity of pazopanib, the treatment was continued. During the next two weeks the dosage needed to be adjusted to 600 mg daily because of grade 2 erythro-palmar toxicity, grade 2 hypertension and grade 1 diarrhoea and anorexia according to the NCI Common Terminology Criteria for Adverse Events. After two months an impressive reduction in tumour size of both the para-aortic lymph nodes and abdominal wall metastases was diagnosed on a CT scan. After taking pazopanib for four months, the patient noticed leakage of defecation through the abdominal wound. An entero-cutaneous fistula was confirmed radiologically. The abdominal wall defect was resected including the fistula, as was a part of the small bowel and the enlarged para-aortic lymph nodes. Histological examination confirmed the entero-cutaneous fistula with extensive necrosis and infiltration of lymphocytes, and location of a few tumour nests of endometrial carcinoma in the fistula wall. The abdominal wall and intestines were free from tumour cells, as were the para-aortic lymph nodes. Because there were no visible metastases left, pazopanib was not restarted after surgery.
The patient is currently, 30 months after discontinuation of pazopanib, still in complete clinical remission.

We analysed the metastases before pazopanib treatment (2009) and the tissue retrieved from surgery after the intestinal perforation to the abdominal wall after pazopanib treatment (2013). Immunohistochemistry for MET, VEGFR,2 FGFR2,3, PDGFRα, KIT, RET and ALK revealed high tumour expression of FGFR2, whereas expression of KIT, RET and ALK were low. FGFR2 expression has also been reported in pazopanib-sensitive lung squamous cell cancer and gastric cancer.12-14 This suggests that high FGFR2 expression could be a predictive biomarker for response to pazopanib.

We found a spectacular response to pazopanib monotherapy in a patient with recurrent metastatic endometrial carcinoma. The tissue samples before and after pazopanib treatment were investigated and intact FGFR2 was found to be a possible biomarker for response.