Oriental cholangiohepatitis (recurrent pyogenic cholangitis): a case series from the Netherlands and brief review of the literature 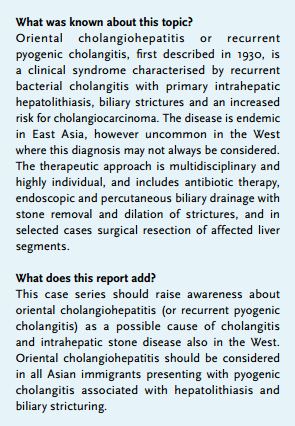 Oriental cholangiohepatitis is a condition first described by Digby in 1930, who observed eight Chinese patients with recurrent bacterial cholangitis associated with hepatolithiasis.1 Since then various other names have been used such as ‘Hong Kong disease’, ‘primary hepatolithiasis’, ‘biliary obstruction syndrome of the Chinese’ and ‘recurrent pyogenic cholangitis’.2,3 The condition is characterised by repeated episodes of cholangitis occurring in Asian populations associated with the formation of intrahepatic bile duct stones in the presence of biliary strictures. Oriental cholangiohepatitis is prevalent in East Asia and is more common in rural areas.4 However, it is an uncommon condition in the Western world that may not always be considered in appropriate cases.4 We here report our experience with five patients from a single Dutch centre.

Case 1
A 31-year-old male was referred for evaluation of recurrent episodes of cholangitis. Born in Bangladesh, he had moved to the Netherlands six years previously as a political refugee. Reportedly at the age of 10, analysis for abdominal pain revealed no abnormalities. His further medical history was unremarkable. The first episode of cholangitis occurred at age 30. Magnetic resonance cholangiopancreatography (MRCP) showed multifocal segmental strictures and biliary dilatation with multiple concrements in both intrahepatic and extrahepatic bile ducts. Subsequently endoscopic retrograde cholangiopancreatography (ERCP) was performed with biliary sphincterotomy and removal of multiple stones (figure 1). Since this first episode multiple hospital admissions occurred because of recurrence of bacterial cholangitis associated with hepatolithiasis. Colonoscopy showed no abnormalities. Given these epidemiological, clinical, and imaging findings a diagnosis of oriental cholangiohepatitis was made. We started ursodeoxycholic acid together with extensive endoscopic and percutaneous treatment of the biliary strictures and removal of the bile duct stones. In the follow-up period of 13 years the patient still has recurrences of bacterial cholangitis and hepatolithiasis about once a year.

Case 2
A 40-year-old female was admitted to our hospital with bacterial cholangitis. She was born in China and moved to the Netherlands at age 30. During two previous episodes of cholangitis she was treated with antibiotics and underwent endoscopic extraction of biliary stones. MRCP showed large impacted intrahepatic concrements together with biliary mural irregularities. A dark stone was removed endoscopically using mechanical lithotripsy. The patient did not attend further follow-up appointments.

Case 3
A 28-year-old male was referred for treatment of large intrahepatic stones. He was from Chinese origin and migrated to the Netherlands at age 17. He presented in another hospital with acute onset of abdominal pain. MRCP showed three large stones in a grossly dilated left hepatic duct with multifocal strictures and peripheral narrowing (‘pruned tree’). The right hepatic duct showed an irregular aspect with subtle strictures. An initial attempt at endoscopic stone removal failed and a percutaneous transhepatic biliary drain was inserted in the left system (figure 2). Extracorporeal shock wave lithotripsy (ESWL) caused the stones to fragment. During subsequent ERCPs multiple dark stones and fragments could be removed. No further follow-up information is available. 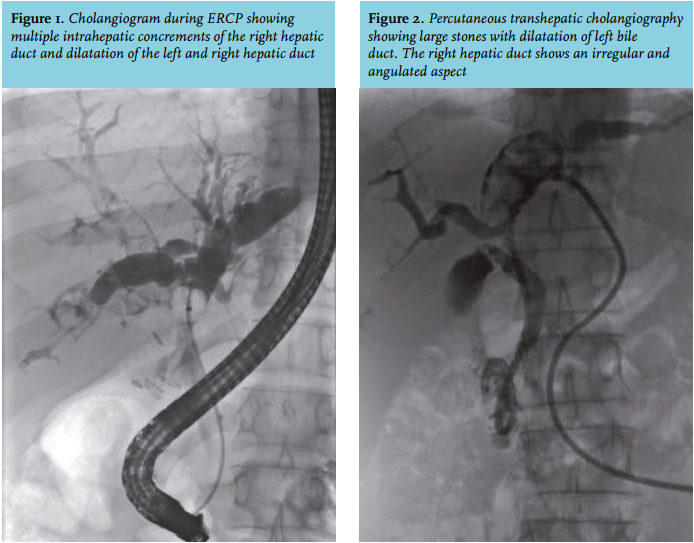 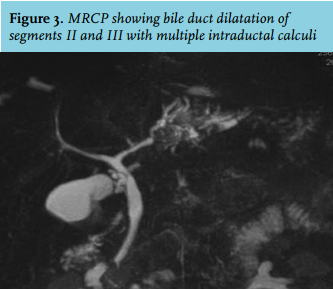 Case 4
A 30-year-old female presented with recurrent episodes of severe upper abdominal pain without fever or cholangitis. The patient migrated from China to the Netherlands at age 20. MRCP demonstrated atrophy of the left liver lobe in combination with bile duct dilation and multiple intraductal calculi in segments II and III. The biliary tree showed no other obvious abnormalities (figure 3). After ERCP to remove the stones was unsuccessful, left hemihepatectomy with cholecystectomy was performed. Pathological examination showed cystic dilation of the bile ducts with stone formation and chronic inflammation. Over a one-year follow-up period the patient remained asymptomatic.

Case 5
A 31-year-old Chinese female was admitted with mild abdominal pain and fever. Her past medical history was unremarkable. MRCP showed segmental dilation of the intrahepatic bile ducts in segment V and VI with mural irregularity. Furthermore multiple small intrahepatic calculi were visualised. She was successfully treated with antibiotics. Because of this first mild presentation with a favourable response to antibiotic treatment a conservative approach was chosen. During a four-year follow-up period, the problems did not reoccur. 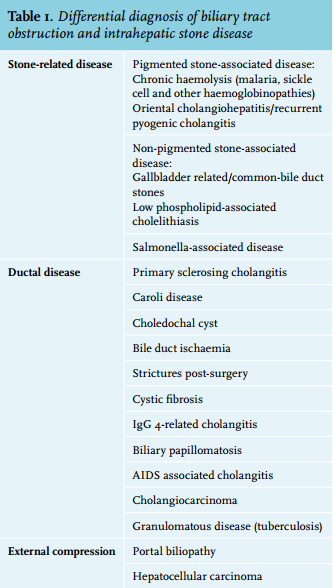 We report five relatively young adult patients largely originating from China, who presented with pyogenic cholangitis and were considered to suffer from oriental cholangiohepatitis. This is the first report of this disease in the Netherlands. The diagnosis was based on the combination of clinical and radiological findings. Primary sclerosing cholangitis was another important diagnostic consideration; however, the radiological findings were regarded to be atypical for that condition but fully compatible with oriental cholangiohepatitis. In addition, no clinical or endoscopic evidence was found for inflammatory disease, a condition seen in the large majority of patients with primary sclerosing cholangitis. Also, no clinical or radiological evidence was found for other disorders characterised by cholangitis, biliary structures and stone formation (table 1).

Oriental cholangiohepatitis is characterised by recurrent bacterial cholangitis and the presence of calculi within the intrahepatic bile ducts, biliary strictures and an increased risk for cholangiocarcinoma.5 The incidence of the disease among men and women is comparable. The stones form within the intrahepatic biliary system and are mainly composed of calcium bilirubinate or brown pigment, in contrast to the cholesterol stones more commonly seen in patients with other gallstone-related diseases, which is the vast majority of patients in the West.
Oriental cholangiohepatitis is endemic in East Asia. In the West the disease is occasionally encountered, virtually restricted to Asian immigrants. Sporadic case reports describe the disease in Caucasian patients.6,7 There is a possibility, however, that in these non-Asian patients the diagnosis was inaccurate and was mistaken for another disorder with intrahepatic stone formation and/ or strictures. Intrahepatic stone formation in Caucasian patients is mostly due to primary sclerosing cholangitis, Caroli disease, low phospholipid-associated cholelithiasis, choledochal cyst and portal biliopathy. Possible causes of biliary tract obstruction and hepatolithiasis are shown in table 1.
There is evidence that the incidence of the disease is declining.8 The improved economic situation and living standards associated with westernisation of diet are thought to be involved in the changing epidemiology in Asian countries.8 The aetiology remains unknown. One hypothesis is a biliary tract infection with the parasites Clonorchis sinensis or Ascaris lumbricoides as an initiating factor. Infection with these parasites is endemic in the same region where oriental cholangiohepatitis is most prevalent and has been linked to dietary intake of pickled vegetables and uncooked and contaminated fish. Clonorchis infestation can cause bile stagnation and inflammatory changes of small bile ducts, resulting in duct obstruction.
However, the prevalence of Clonorchis infection is not increased in affected individuals compared with the general population.9 Evidence against a causative role includes a high incidence of oriental cholangiohepatitis in Taiwan and Japan despite a low incidence of Clonorchis infestation. Smouldering bacterial infection, possibly associated with portal bacteraemia eventually leading to intraductal inflammation and hepatic stone formation, has also been suggested as a potential cause. This hypothesis, however, does not explain the specific epidemiological characteristics of the disease.10
Patients often present with recurrent pyogenic cholangitis. Physical examination may reveal hepatomegaly or a palpable gallbladder in a minority of cases. Laboratory findings are non-specific and may show increased inflammatory markers such as CRP and liver biochemistry abnormalities indicating biliary obstruction. The clinical course is usually characterised by recurrent episodes of bacterial cholangitis and abdominal pain. Pancreatitis can occur, possibly due to transpapillary stone passage. Potential complications are segmental liver atrophy, secondary biliary cirrhosis and cholangiocarcinoma. An incidence of cholangiocarcinoma of 3-9% has been reported.11 The actual risk of this tumour, however, has not been firmly defined.
Diagnosis is established by characteristic radiological findings in patients with a clinically compatible socio-epidemiological background. Nearly all patients have intrahepatic stones of varying sizes, with predominant involvement of the left hepatic duct.5 Biliary dilatation is present in all cases, especially of the central and left hepatic ducts. Abrupt tapering of the peripheral bile ducts with mural irregularity is frequently encountered (arrowhead sign). There may be paucity of (small) intrahepatic bile ducts resulting in a ‘pruned tree’ appearance. Up to 70% of the patients also have gallbladder stones.5
Computed tomography and MRCP are the main imaging procedures to provide accurate information on site, extent and severity of the disease but also to exclude other causes of intrahepatic stone disease and biliary tract obstruction. When cholangiographic findings are atypical or when there is any evidence of inflammatory bowel disease, colonoscopy should be considered.
In patients with suspected or established disease it is doubtful whether screening for parasitic infections is indicated considering the low likelihood of a causal relationship and absence of controlled trials to demonstrate efficacy of antiparasitic treatment on clinical outcome.
Oriental cholangiohepatitis seems to be associated with an increased risk of cholangiocarcinoma; however, at present established diagnostic markers or imaging modalities for early detection of cholangiocarcinoma are lacking. As there is no evidence-based guideline, the surveillance policy should be left to the discretion of individual centres.

Initial management should be directed at treatment of cholangitis with antibiotics and biliary drainage. A multidisciplinary approach is mandatory for the correct diagnosis and choice of proper management. In patients with dilated intrahepatic and extrahepatic bile ducts with intrahepatic stones, ERCP is usually the preferred interventional procedure. Percutaneous transhepatic cholangiography and drainage is an important alternative or additional therapeutic procedure. In specific cases, particularly with localised or uni-lateral involvement, segmental resection or hemi-hepatectomy with or without hepaticojejunostomy may be indicated and even be the therapy of choice. Symptoms recurred in 62% of patients without treatment aimed at biliary drainage compared with approximately 30% after presumably complete endoscopic or surgical stone removal with therapeutic ERCP or surgery.12 Furthermore, a 30% risk of residual or recurrent stones after intentionally complete stone removal has been reported.13 In a large retrospective cohort study the rate of cholangitis was higher among patients who underwent biliary-enteric anastomosis (31%) than in those who did not (3.4%).13
Ursodeoxycholic acid treatment is not effective in dissolving existing stones in most patients since they are composed of calcium bilirubinate instead of cholesterol. Although occasional case reports have suggested a possible benefit14 the value of this treatment remains to be determined.
The same applies to intermittent or long-term antibiotic therapy. With these uncertainties in mind, the widely used clinical resource UptoDate® advises to use ursodeoxycholic acid at a dosage of 20 mg/kg/day.15
In summary, oriental cholangiohepatitis is an incompletely understood disease, characterised by recurrent bacterial cholangitis associated with hepatolithiasis and biliary stricturing. In the West the diagnosis should be considered in all Asian immigrants with biliary tract disease. The therapeutic approach is multidisciplinary and highly individual, and includes antibiotic therapy, endoscopic and percutaneous biliary drainage with stone removal and dilation of strictures, and in selected cases surgical resection of affected liver segments.