Older patients presenting to the emergency department (ED) experience high rates of adverse outcomes,1 but they form a heterogeneous group and it is unknown who is at highest risk. The incidence of adverse outcomes is particularly high after three months, with a mortality rate about 10% and increased functional dependence between 10-45%.1 Early identification of those at highest risk gives an opportunity to guide preventive interventions and informed treatment decisions.2
Current models use either severity of disease or existing geriatric vulnerability for prediction. The Modified Early Warning Score (MEWS) is an indicator of disease severity and showed to be valuable in predicting worse in-hospital outcomes in older patients.3 However, prognostication of MEWS for long-term outcomes in older adults is unknown. The Identification of Seniors At Risk (ISAR)4 and Triage Risk Stratification Tool (TRST)5 focus on existing geriatric vulnerabilities, such as functional and cognitive impairment, to predict adverse health outcomes. Neither of these tools accurately identify high-risk patients,6,7 while that vulnerable group of patients benefits most from an increased level of attention.
We conducted a prospective follow-up study among all older patients who visited the EDs in the region of Leiden. The aim was to develop and validate a prediction model for adverse health outcomes in older emergency patients. To reflect the condition of the patient, both demographics and severity of disease indicators and existing geriatric vulnerability were taken into account.

Study design and setting
We performed a prospective follow-up study in the EDs of two hospitals in the region of Leiden, the Netherlands. The Leiden University Medical Center (LUMC, derivation cohort) is an academic hospital with a level 1 trauma centre and Alrijne Hospital (location Leiderdorp, validation cohort) is a peripheral hospital with a level 2 trauma centre. We considered all patients eligible who fulfilled the inclusion and exclusion criteria. The inclusion criterion was patients aged ≥ 70 presenting for the first time to the ED in the study period. The exclusion criteria were patients who were triaged with highest urgency (code red), who we were not able to approach due to an unstable medical condition, lack of permission of the nurse or physician to enter the room for any reason or due to impaired mental status without an authorised relative to provide informed consent. Also a language barrier and patients who left the waiting room were not eligible. Patients were enrolled 7 days a week for 12 weeks with 24-hour coverage in the LUMC and 12-hour coverage (10.00 am to 10.00 pm) in Alrijne Hospital. Written informed consent was obtained before inclusion. The medical ethics committee of the LUMC and Alrijne waived the necessity for formal approval of the present study, as the study closely follows routine care.

Organisation of emergency care in the Netherlands
Basic health insurance is mandatory in the Netherlands and covers the care from general practitioners (GPs), hospital care and specialist care. Emergency care is provided by GPs and in EDs. Patients in need of immediate care can contact the GP, the GP out-of-hours service, call for an ambulance or go to an ED by themselves. Depending on the urgency, patients are expected to contact or visit the GP first. As with the structure of the LUMC and Alrijne, an increasing number of GP out-of-hours centres are integrated close to the ED to avoid unnecessary ED visits.8 In EDs a triage nurse will prioritise patients first based on the severity of their condition; then the patient can either be directed to the emergency room or the waiting room. In the Leiden region, the LUMC and Alrijne Hospital are the only two EDs, together servicing an unselected catchment area of 400,000 inhabitants of all ages. In both EDs there are no special rooms or trajectories for older patients. Two patient groups bypass the ED and were therefore impossible to include: 1) Older patients with a myocardial infarction in the ambulance who were directly sent to the catheterisation room and 2) older patients with a CVA and eligible for thrombolytic therapy underwent a brief primary assessment in the ED and were then sent to the neurology ward after a CT scan.

Data collection
We included patients in the LUMC from September to November 2014 and in Alrijne Hospital from March to June 2015. In both hospitals teams of medical students were present at the ED from 10.00 am until 10.00 pm to enrol patients, and in the LUMC the ED staff were responsible for inclusion from 10.00 pm until 10.00 am. Before the start of the inclusion period, the medical students and ED staff of the LUMC attended training sessions to guarantee convergence on conducting the questionnaires. The ideal moment for conducting the questionnaires turned out to be 30-45 minutes after arrival of the patient to the ED. At that moment the patient had spoken to the physician and was waiting for lab results or further analysis. The questionnaire took 5-10 minutes to complete. A representative was permitted to answer questions when the patient was unable to provide answers, with the exception of the cognition and self-reported quality of life questions. Questions were collected on a tablet computer and sent directly to a secured database. Additional medical data were extracted automatically from the medical records, verified manually and added to the database.

Baseline
At baseline, data on three domains were assessed: demographics, severity of disease indicators and geriatric measurements. Demographics consisted of age, gender, living arrangements and level of education. A low level of education was defined as elementary school, basic education as community college, middle education as secondary education and high education as higher vocational training or university. Severity of disease indicators consisted of characteristics related to the ED visit: way of arrival, triage category by the Manchester Triage System,9 fall-related ED visit, indication to measure vital signs and indication to perform a blood test. Whether the visit was fall related was obtained by asking the question: Is the reason for presentation related to a fall? Indication to measure vital signs or laboratory tests was scored positively when, at the moment of presentation, vital signs needed to be measured or a laboratory test was ordered based on the Manchester Triage System and local protocols. Geriatric measurements consisted of the number of different medications mentioned by the patient, history of diagnosed dementia reported by patient or proxy, current use of a walking device, the Identification of Seniors at Risk (ISAR)4 screening tool, the Six Item Cognitive Impairment test (6CIT)10 and the Katz Index of Activities of Daily Living (ADL)11 questionnaire. The ISAR was developed for patients aged ≥ 65 and aims to predict the risk of adverse health outcomes six months after the ED visit. The ISAR consists of six dichotomous questions and scores range from 0 to 6 with higher scores denoting higher risk. The 6CIT is a short cognition test and was validated in a Dutch population against the Mini Mental State Examination (MMSE)12 with a score on the 6CIT of ≥ 11 indicating cognitive impairment (MMSE < 24).13 Six questions lead to a score ranging from 0 to 28 with higher scores indicating more cognitive impairment. The Katz ADL indicates functional status two weeks before presentation to the ED to eliminate possible effects of the acute illness and consists of six dichotomous questions on dependence in bathing, dressing, toileting, transfer, eating and incontinence. Scores range from 0 to 6 with higher scores an indication of more dependency.

Outcomes
The main outcome of the study was composite outcome, a composite of functional decline or mortality at 90-day follow-up. Functional decline was defined as at least one point increase in the Katz ADL score or new institutionalisation, defined as a higher level of assisted living at 90 days after ED visit. We analysed 90-day mortality separately. Mortality can be seen as the ultimate decline and might then be taken together with functional decline. On the other hand, the intervention strategy could differ for patients at high risk for mortality. For that reason we developed a separate prediction model for 90-day mortality. A model solely for functional decline is not feasible. Excluding deceased patients would imply that the model is only applicable in patients who will not die within a certain period, which we do not know at the moment of presentation. Three months after the ED visit the patient was contacted by telephone. In case of no response after three attempts on three consecutive days, the GP was contacted to verify the phone number and living status. Finally a letter with the follow-up questions was sent to patients who had not moved to a higher level of assisted living and who were alive according to the information from the GP. Data concerning mortality were derived from the municipal records.

Statistical analysis
Baseline characteristics are presented as mean with standard deviation (SD) in case of normal distribution, median with interquartile range (IQR) in case of skewed distribution or as numbers with percentages (%). Adequate statistical power for obtaining good predictions requires a minimum of 10 events per candidate predictor.14 This rule was followed for the composite outcome. To reduce the number of candidate predictors, the most relevant questions from the questionnaires (Katz ADL, ISAR, 6CIT) were pre-selected. Single questions with the highest R-square values on the entire questionnaire score were selected and added to the list of candidate predictors for development of the prediction model. Missing predictors were imputed via single imputation techniques.15 The prediction model was derived via backward elimination with Akaike’s Information Criterion (equivalent to p < 0.157 for predictors with 1 df). With this technique the least contributing candidate predictors are deleted until the deterioration in model fit is too large. Discrimination of the models was assessed with the area under the receiver operating characteristic curve (AUC). Internal validation was conducted with a 500 bootstrap sample procedure, where we repeated the backward elimination procedure in each bootstrap sample to estimate the optimism-corrected performance that is expected if the derived prediction model is applied in other datasets. The internal validation procedure also provided a shrinkage factor to adjust the estimated regression coefficients for overfitting.16 The adjusted regression equation provides predictions for new individuals. It was validated in the Alrijne patients.17 Calibration of the model, which reflects how well predicted and observed outcomes agree, was examined by using the adjusted regression equation. Calibration was examined graphically with calibration plots, with a goodness of fit test (Hosmer and Lemeshow test18). The formula 1/(1+e(-linear predictor)) was applied with the adjusted regression equation to determine the individual risks of experiencing the outcome. Performance of the model for the patients with the highest 30%, 20% and 10% predicted risk was evaluated according to sensitivity, specificity, positive predictive value (PPV), negative predictive value (NPV), positive likelihood ratio and negative likelihood ratio, with 95% confidence intervals. To compare our model performance with the existing six-item ISAR questionnaire, predictive performance of the ISAR on different cut-off points was also calculated. The level of statistical significance was set at p < 0.05. Statistical analyses were performed using IBM SPSS Statistics package (version 20) and R version 3.1.1. 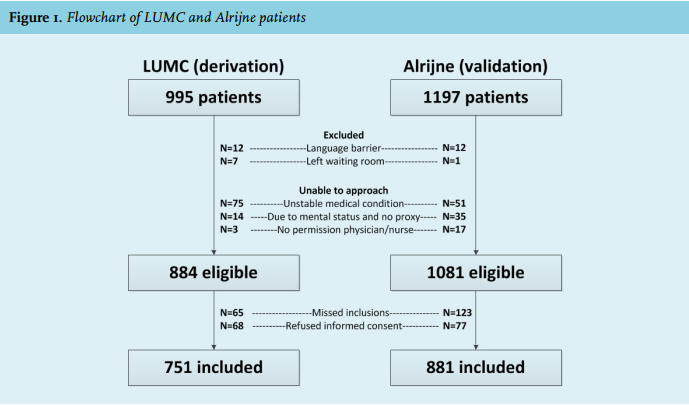 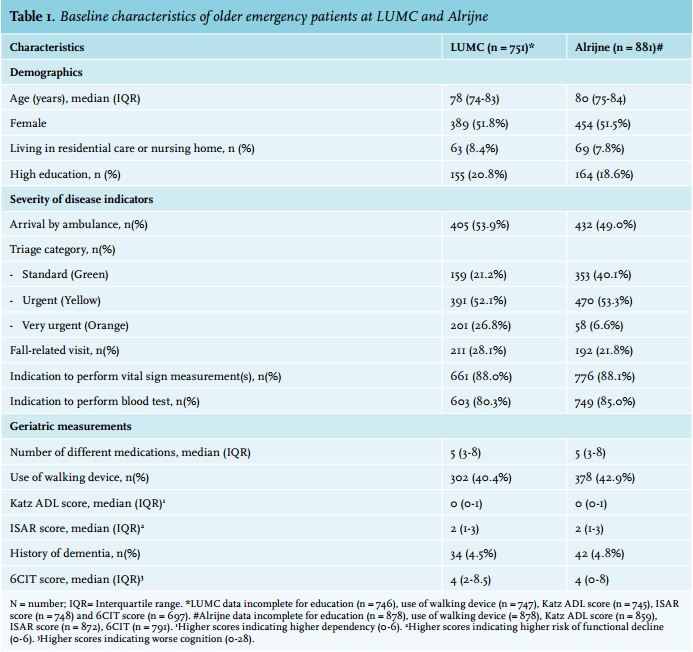 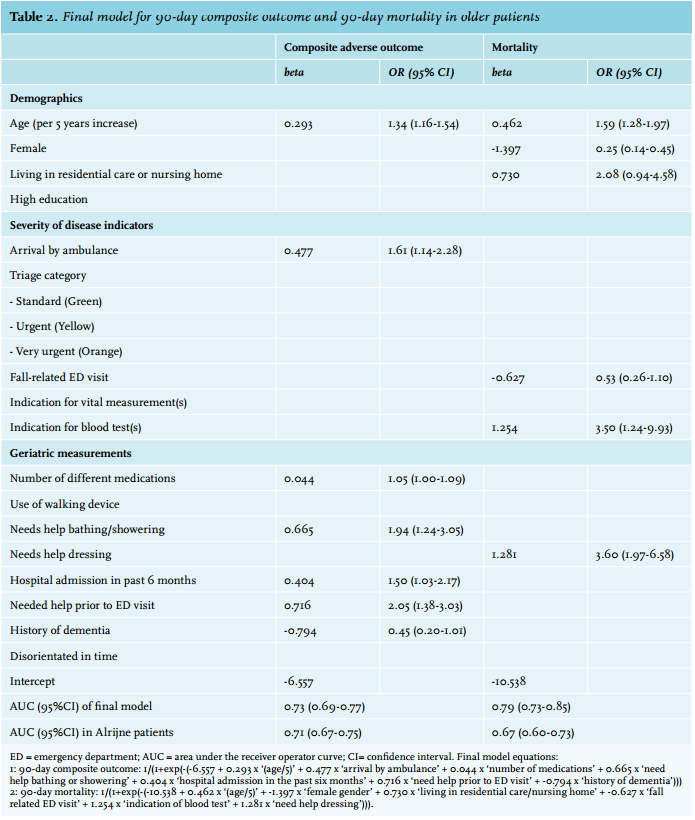 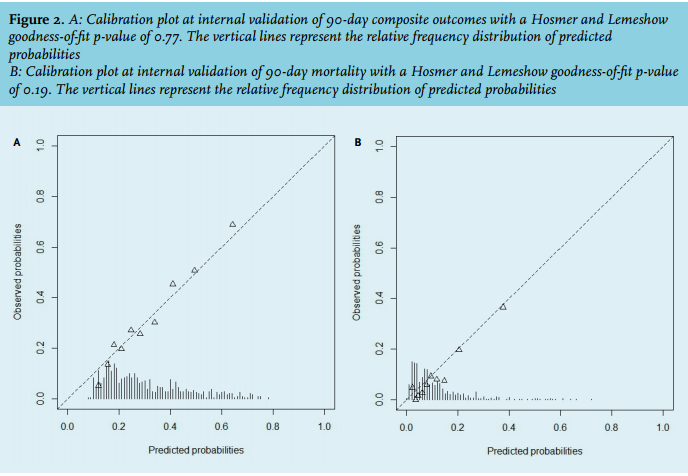 Conflict of Interest:
The authors declare no conflict of interest.
Funding:
The Institute for Evidence-Based Medicine in Old Age (IEMO) is funded by the Dutch Ministry of Health and Welfare and supported by ZonMW (project number 62700.3002). 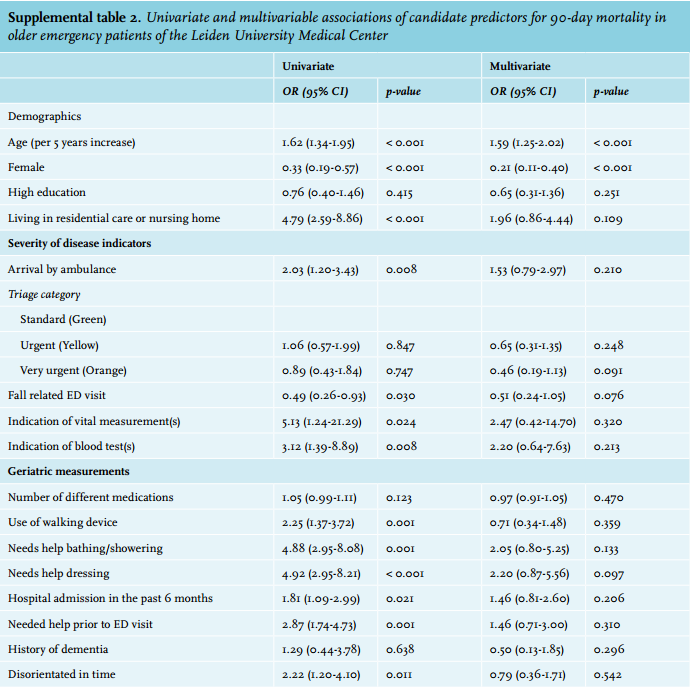