A continuous infusion of etoposide and doxorubicin for refractory MAS management

To the Editor,
Macrophage activation syndrome (MAS) is a potentially life-threatening complication of adult-onset Still’s disease (AOSD) without optimal treatment.1 Here, we report a case of MAS caused by AOSD, which was effectively treated by a 96-hour continuous infusion of etoposide and doxorubicin after the patient failed to respond to the traditional approach to treatment.
A previously healthy 23-year-old female was admitted with complaints of hyperpyrexia in 2013. Laboratory studies showed severe anaemia and elevated white blood cell count (neutrophils at 91%), increased erythrocyte sedimentation rate, hyperferritinaemia, and normal alanine aminotransferase (table 1). Bone marrow examination revealed no haemophagocytosis. Three days later, she developed a generalised rash with high fever, but negative in blood culture, despite the fact that ciprofloxacin and imipenem were administered aggressively. Further lab tests, including brucellosis, tuberculosis, Epstein-Barr virus, cytomegalovirus, anti-nuclear antibodies and rheumatoid factor, all turned out to be negative. No abnormalities were found in abdominal and superficial lymph nodes by ultrasonography. The patient was diagnosed with AOSD based on the Yamaguchi criteria and was administered high-dose methylprednisolone (1000 mg/day) and intravenous immunoglobulins (0.5 g/kg/day) for three days as suggested from a previous report,2 which alleviated the fever and significantly improved the polyarthralgia. However, the fever recurred, and the serum ferritin increased when the methylprednisolone was tapered. At the same time, splenomegaly together with elevated triglyceride and sCD25 was observed with normal coagulation screening tests and natural killer cell activity (table 1). So the patient was diagnosed with MAS secondary to AOSD. Fever and splenomegaly were subsided under immunosuppressive therapy following the haemophagocytic lymphohistiocytosis 2004 guidelines1 (table 1). However, the patient endured a flare-up of disease at the end of week 4. The effectiveness of the continuous infusion schedule in lymphoma inspired us to use the protocol to suppress excessive activated immune cells maximally 3 . A 96-hour continuous infusion of etoposide (50 mg/m2 /day) and doxorubicin (10 mg/m2 /day) was introduced biweekly. During the following course, her condition improved significantly without reactivation of the rheumatoid disorder (table 1).
High ferritin level is a typical manifestation of AOSD; however, hyperferritinaemia (> 10,000 ng/ml) is more suggestive of MAS secondary to AOSD. In this case, the patient had recurrent hyperferritinaemia and met five of the eight criteria required for the diagnosis of haemophagocytic lymphohistiocytosis or MAS. MAS should be diagnosed early and treated with immunosuppression drugs immediately. However, we have few choices in patients refractory to or intolerant of etoposide. Some monoclonal antibodies, such as daclizumab, infliximab, and adalimumab either introduced solo or in combination with etoposide showed some benefits in some refractory cases.1 Unfortunately, those monoclonal antibodies were not available in China. In our case, we found that a 96-hour continuous infusion of etoposide and doxorubicin was safe and effective in the patient with refractory MAS secondary to AOSD. Etoposide may eliminate activated T cells selectively and suppress inflammatory cytokine production more efficiently as it does in lymphoma. It was proposed that extending drug exposure may enhance cell killing by modulating the cell cycle and apoptosis.4
In conclusion, a continuous infusion of etoposide and doxorubicin may be a safe and effective treatment alternative for patients with MAS secondary to AOSD. 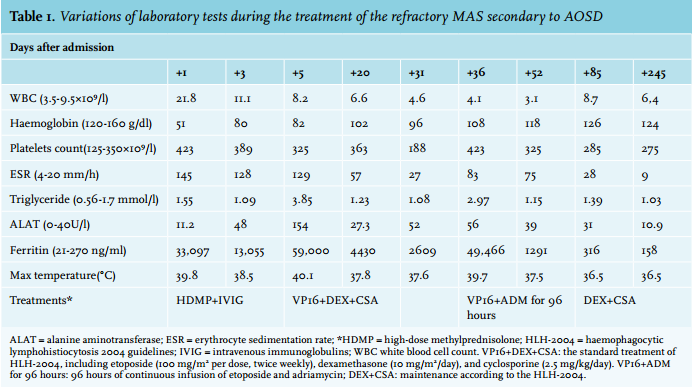 There is no conflict of interest.