Patients
From November 2009 to May 2012, all chronic Q fever patients with an aneurysm of the central arteries or a central vascular graft (abdominal aortic aneurysm (aorta ≥ 30 mm), aneurysm of the common iliac artery (> 12 mm) or aorto-iliac reconstruction, such as an endovascular aneurysm repair or open aorto-iliac reconstruction) and an IgG phase I titre ≥ 1:1024 were included in a multidisciplinary treatment program in the Jeroen Bosch Hospital in ’s-Hertogenbosch and Bernhoven Hospital in Uden, the Netherlands. Within this program, 18F-FDG PET/CT and transthoracic cardiac ultrasound were performed to identify a focus for infection. Patients were partly retrospectively included and partly prospectively.
Patients were included in the PCR-positive study group if diagnosed with an IgG phase I titre ≥ 1:1024 and a positive PCR in blood or tissue; this combination of diagnostic criteria is considered the gold standard for proven chronic Q fever according to the Dutch consensus guideline. The PCR-negative study group included patients with an aneurysm of the central arteries or a central vascular graft and an IgG phase I titre ≥ 1:1024 but a negative PCR for C. burnetii DNA in blood and/or tissue. In these two patient groups, 18F-FDG PET/CT was performed before starting any antibiotic treatment.
The control group consisted of patients with an aneurysm or a central vascular reconstruction and a negative serological profile for Q fever, in whom 18F-FDG PET/CT was performed to evaluate an illness other than an infected aneurysm or vascular graft, with normal white blood cell (WBC) count and C-reactive protein (CRP) level.

Microbiological procedures
Sera were tested for C. burnetii antibodies using immunofluorescence assay (IFA, Focus Diagnostics, Inc., Cypress, CA, USA), assessing the presence of IgM and IgG antibodies to phase I and II antigens. If the IgG phase I titre was ≥ 1:512, sera were also tested by PCR for the presence of C. burnetii DNA. The NucliSensEasyMAG extraction system (bioMerieux, Boxtel, the Netherlands) was used for extraction of DNA from serum and/or tissue. PCR was performed as previously described.27

18F-FDG PET/CT
All 18F-FDG PET/CT scans were performed at the Department of Nuclear Medicine of the Jeroen Bosch Hospital, which is accredited by European Association of Nuclear Medicine Research Ltd. 18F-FDG PET/CT was performed according to the European Association of Nuclear Medicine procedure guidelines.28 Patients fasted for at least six hours before injection of 18F-FDG. A dose of 4.5 MBq per kg was injected 60 min before the start of the scan. Scans were performed on a Biographm CT or Biograph 16 scanner (Siemens Medical Systems, Knoxville, TN, USA) scanning three minutes per bed position from the base of the skull to the middle of the femora. Covering the same area, low-dose CT was performed for attenuation correction. Data were reconstructed in three dimensions. PET, CT and fused images were reviewed using Syngovia software (Siemens). 18F-FDG PET/CT scans were interpreted independently by two experienced nuclear physicians, aware of the suspicion of chronic Q fever. Scans were analysed using a visual grading scale in combination with the pattern of 18F-FDG uptake as described in table 1. 9,18 In case of disagreement, a third reader was consulted and a final conclusion was made after a consensus meeting. 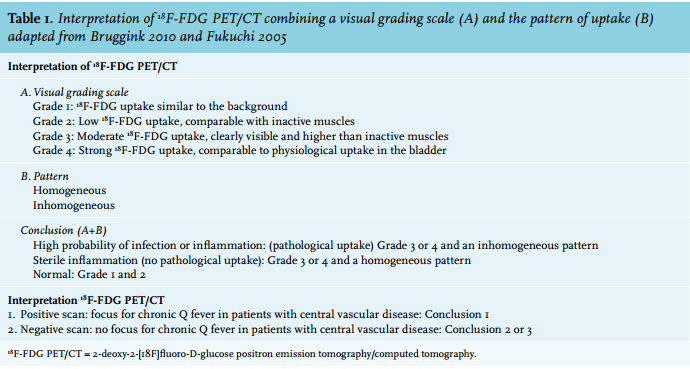 Infection parameters
WBC counts and CRP levels were retrieved from the hospital information system and compared for patients with a positive or negative 18F-FDG PET/CT in the PCR-positive and PCR-negative Q fever study groups.

Clinical outcome
The clinical outcome in terms of cure was evaluated within the PCR-positive and the PCR-negative study groups between patients with a positive and negative 18F-FDG PET/ CT. Patients were considered cured if the IgG phase I titre reached < 1:1024. A favourable treatment response was defined as a fourfold or higher IgG phase I titre decrease with no or minimal clinical complaints.

Data analysis
Results of 18F-FDG PET/CT in the PCR-positive patient group (gold standard) were compared with results in the control group to assess the diagnostic performance of 18F-FDG PET/CT in finding a vascular focus for chronic Q fever. Within the PCR-negative group, 18F-FDG PET/ CT results were compared with those in the PCR-positive group. The diagnostic performance was expressed in terms of sensitivity, specificity, positive predictive value (PPV) and negative predictive value (NPV) with Wilson 95% confidence intervals (CI). Mean WBC counts and CRP levels with standard deviations and p-values (Fisher’s exact test and the single Chi-square test) were calculated using SPSS 18.0 (SPSS Inc., Chicago, IL, USA).

The study protocol is registered in Clinicaltrial.gov, a protocol registration system (registration number: NCT01450501 ID: 50-51800-98-013). The study was ethically approved by the local feasibility committees of the Jeroen Bosch Hospital and Bernhoven Hospital; approval of a regional Medical Research Ethics Committee was not necessary for this study as patients were treated according to the Dutch consensus guideline.

PCR-positive study group
Between November 2009 and May 2012, 13 patients were included in the PCR-positive study group and 22 in the control group. In three of the 13 patients in the PCR-positive study group, chronic Q fever infection was diagnosed by a positive PCR on tissue samples of the vascular wall, while ten patients were included due to positive PCR in blood. Transthoracic echocardiography was performed in all patients and none of them had signs of endocarditis. No abscesses or signs of spondylodiscitis were found in these patients with 18F-FDG PET/CT. None of the patients included in this report were taking any medication such as prednisone, methotrexate, TNF-alpha and rituximab when 18F-FDG PET/CT was performed. Fifty percent of the patients used a statin at the time of diagnosis; no difference was found between patients with or without statin use.
While reviewing the 18F-FDG PET/CT scans, a third reader was consulted for two out of 35 scans (all in the positive-PCR study group); a final conclusion was made after a consensus meeting.

18F-FDG PET/CT indicated pathological vascular uptake in six out of 13 (46%) patients in the PCR-positive study group, while no pathological uptake or a sterile inflammation was observed in three and four patients, respectively (as shown in figure 1). In the control group, 18F-FDG PET/ CT showed pathological vascular uptake in two out of 22 (9%) patients. One of the positive patients had undergone endovascular aneurysm repair in 2003, while the other one had received an aortic graft in 2006. Follow-up after 72 and 108 months (solely based on clinical follow-up, no second 18F-FDG PET/CT was performed), respectively, revealed no signs of an infected graft (table 2). In the remaining 20 patients, no pathological uptake was observed in nine patients (one patient with a central graft and eight patients with an aneurysm), while eleven patients showed signs of a sterile inflammation (four patients with a central graft and seven patients with an aneurysm). 18F-FDG PET/CT has a sensitivity of 46% (95% CI: 23-71%), specificity of 91% (95% CI: 71-99%), PPV of 75% (95% CI: 41-93%) and NPV of 74% (95% CI: 55-87%) for detecting chronic Q fever in patients with central vascular disease (table 3). Two of the three patients with a positive C. burnetii PCR of the vascular wall showed a positive 18F-FDG PET/CT.
We checked for differences in uptake (especially a difference in homogeneous and heterogeneous uptake) between patients with an aneurysm or graft (table 4). No differences were found and therefore we decided it is valid to combine the two groups (p = 0.169). Additionally, the distribution in the pattern of uptake is distinctly different in the grade 1/2 and grade 3/4 group. In grade 3/4 a clear difference in distribution of pattern of uptake is seen between the PCR-positive group and the control group.
Table 5 shows the mean WBC count and CRP level in patients in the PCR-positive study group with a positive 18F-FDG PET/CT compared with patients with a negative 18F-FDG PET/CT. No significant differences were observed (p = 0.434 and p = 0.640, respectively). 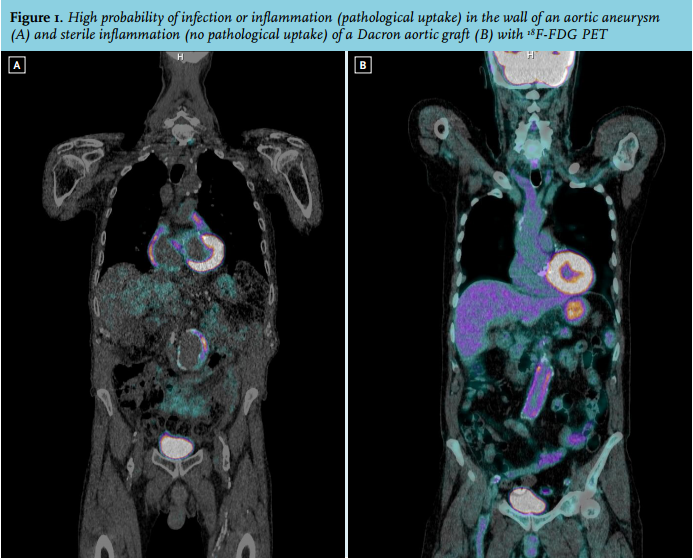 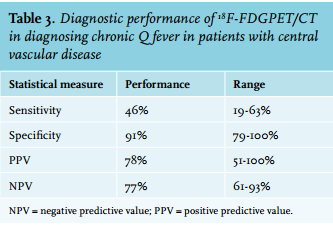 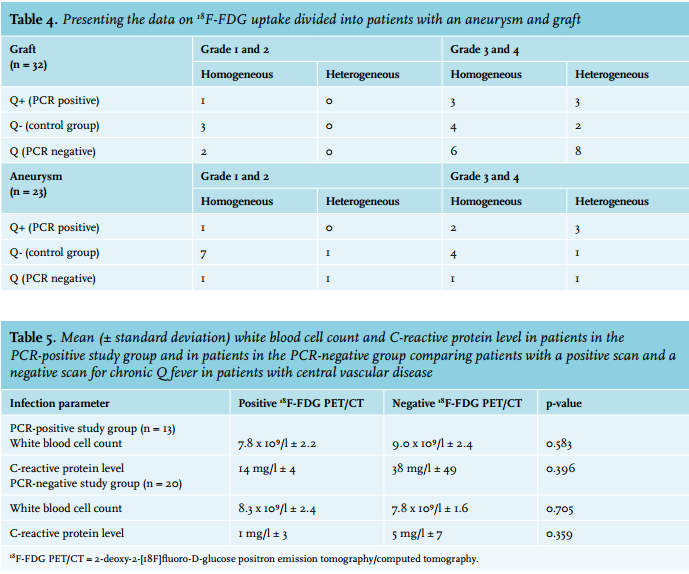 The combination of 18F-FDG PET/CT, as an imaging tool for identifying a focus of infection, and Q fever serology is a valid diagnostic strategy for diagnosing chronic Q fever in patients with central vascular disease.

This study was financially supported by the Netherlands Organization for Health Research and Development (ZonMw, grant no. 205520001). The sponsor had no involvement in the study design, data collection, data analysis or interpretation of the study results. The authors declare no conflict of interest.

There are no conflicts of interest.