Seen from the moon we are all the same size: Deceased donation in the Netherlands

Kidney transplantation is a life-saving therapy for patients with end-stage renal disease (ESRD). In addition to providing a survival benefit, it improves the quality of life and is also cheaper compared with dialysis.1 However, in the Netherlands, as in the rest of Europe, there is a shortage of deceased organ donors and supply does not meet demand. This has spurred research to find ways to improve the quality and longevity of deceased donor organs. Examples of such strategies include machine preservation of organs and other interventions aimed at decreasing ischaemiareperfusion injury.2,3 In addition, the past decades have seen an increasing use of organs from deceased donors that were not considered for transplantation in the past.
Two types of deceased donors are distinguished: donation-after-brain death (DBD) and donation-aftercirculatory death (DCD) donors.4 The latter group was formerly known as non-heart beating donors and is divided into four different categories.4 The majority of DCD donors in the Netherlands are of category 3. These are patients with an infaust medical prognosis (often because of irreversible neurological injury) who do not meet the brain death criteria and in whom the medical decision is made to withdraw life-supporting treatment. After circulatory arrest has occurred and after respecting a no-touch period of five minutes, the donor is transferred to the operating theatre for procurement of the organs.4
The results of DCD donor kidney transplantation are good. Although there is a higher risk of both primary non-function and delayed graft function, kidney allograft survival is not very different from DBD donor kidney transplantation.5 Importantly, DCD donor kidney transplantation offers a survival benefit compared with dialysis.6 In the Netherlands, a national DCD donor protocol is in effect and since 2001, kidneys from both DBD and DCD donors are indiscriminately allocated by means of the national renal allocation program.
In this edition of the Netherlands Journal of Medicine, Leiden and colleagues report a study which investigated how the introduction of the Dutch national DCD donor program affected the overall number of referred and actual donors and the resulting transplantations in the period 2000 to 2014.7 Their analysis demonstrates that the total number of donors (both DBD and DCD) that were referred for organ donation increased from 213 in the year 2000 to 336 in 2014, corresponding with an increase of 58%. During this same period, the number of organ transplantations increased by 42% and rose from 646 to 920. This increase in both referred and utilised donors largely resulted from the growth of the number of referred DCD donors, which represented 14% of all donors in 2000 and 54% in 2014.7
However, the number of DCD donors from whom organs were actually recovered and subsequently transplanted increased by only 34%. In addition, the utilisation rate of organs recovered from DCD donors decreased during the study period from 84% (2000-2002) to 67% (2012-2014). This probably resulted in part from the increase in age of DCD donors that occurred during this same time period.7 So is the glass half full or half empty? Obviously, the good news is that through the continued efforts of many, during the past 15 years, there has been a growth in the number of donors resulting in more patients having been transplanted. As such, the Dutch national DCD program, which aimed to create an extra pool of donors, has been very successful.
The downside may be that this growth has been realised by transplanting more organs from elderly DCD donors. The quality of such organs is less and graft survival not comparable to that of younger DCD donors. In addition, organs from many DCD donors were not procured after referral or the organs were not considered suitable after explantation. Thus, making a transplantation from a DCD donor possible requires more effort compared with a DBD donor. Third, the growth of the number of DCD donors may have resulted from a substitution of DBD donors. This is a real concern because the medical management of DBD donors is different from that of DCD donors and intensive care specialists may not wait for brain death to occur. If this is the case, DCD donation may put the cart before the horse.
Finally and perhaps most importantly, it remains to be seen whether the trend observed during the past 15 years and reported here will continue. Recent data from the Dutch Transplant Foundation (see www.transplantatiestichting.nl) demonstrate that the number of effectuated deceased donor transplants in the first months of 2016 has dropped as compared with the same period in 2015. Between 1 January and 6 July 2016, 111 deceased organ donors were effectuated compared with 134 donors in the same period in 2015, corresponding with a 17% decrease. The number of transplanted kidneys from DBD donors in the first half of 2016 was comparable with 2015, with 102 and 103 kidneys, respectively (-1%). The number of kidneys transplanted from DCD donors decreased by 27% from 130 (2015) to 95 (2016). It therefore appears that nothing much may have changed (figure 1). 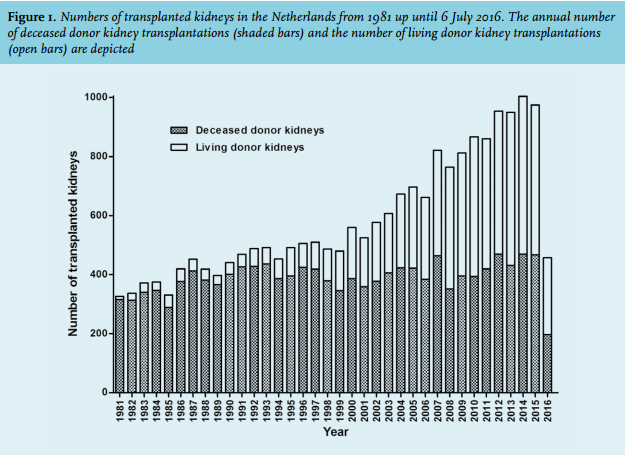 So what are the therapeutic options for patients with ESRD? We believe the answer is an increasing use of living donor kidney donation. Living kidney donation, and preferably pre-emptive transplantation, is the preferred transplantation modality.8 More than half of all kidney transplantations in the Netherlands is now performed with the use of living donors (see www.transplantatiestichting.nl and figure 1) It is the living kidney donor program which is largely responsible for the increase of the total number of kidney transplantations in the Netherlands and the decrease of the waiting list that has been observed in recent years.
It appears that there is room to increase the living donor program even further.9 Kidney exchange programs, such as kidney paired donation with the use of kidneys from non-directed (or altruistic) donors in a national program, are likely to expand the live donor pool.9 In addition, home-based patient education programs have been shown to increase patient’s knowledge about renal replacement therapy (RRT), to change their attitude towards RRT, to optimise informed decision-making and to promote access to (pre-emptive) living donor kidney transplantation.10,11 In 2016, four transplant centres and four large dialysis centres embarked on a project sponsored by Zorgverzekeraars Nederland (The Dutch Association of Health Insurers) entitled ‘Nierteam aan Huis’ (kidney team at home) to find out whether the results of this strategy can be generalised. However, for individuals who are waiting for a non-renal organ, the prospects are not so bright. Patients with end-stage liver or pulmonary failure have no alternative but transplantation and for patients with end-stage heart failure, transplantation is still the best treatment option.12
Many of these patients will die on the waiting list, will be removed from the waiting list or will not be listed at all because their chances of getting an organ transplant in time are slim. As transplant professionals, we owe it to these patients to keep the pressure on the general public and our politicians to increase the rate of organ donation in the Netherlands.