Answer to Photo Quiz: Abdominal pain with a remarkable origin


Our suspected diagnosis was confirmed by a CT scan of the abdomen, showing an infrarenal aneurysm of the abdominal aorta (AAA) with a diameter of 17 cm, causing a mechanical ileus (figure 2).
AAAs are relatively common and potentially life-threatening.1 They are defined as a focal dilatation of an artery with at least a 50% increase over the vessel’s normal diameter. Therefore, an infrarenal aorta that is 3 cm or more is considered an AAA. An AAA of 17 cm is an exceptional finding, because the risk of rupture increases strongly with increasing diameter.2 AAAs with a diameter > 8 cm are associated with a yearly chance of rupture of 30-50%.2 AAAs generally affect elderly Caucasian men.3 Risk factors include smoking, chronic obstructive pulmonary disease, and increased body mass index. In addition, individuals with first-degree relatives with AAAs are at increased risk.
Most AAAs are asymptomatic until they expand (or rupture) and many are detected as an incidental finding.4 However, patients may experience a wide range of complaints such as pain in the back, abdomen or groin. Other symptoms originate from local compression such as nausea, vomiting, or urinary symptoms. Mechanical ileus, as in our patient, has been described before, and occurs in < 1%.1
AAAs are treated surgically.1 The primary methods are by an open or endovascular approach. Our patient was treated with an aortobifemoral prosthesis through the classic open approach by laparotomy. The list of potential complications is long. Open elective repair is accompanied by a mortality rate of 1.5-8% ( endovascular repair < 1%).1
Our patient had suffered from abdominal symptoms for a number of years. We suspect that recent enlargement of an AAA caused the recent increase in his complaints. The post-surgical admission to the intensive care unit was uncomplicated, after three days the mechanical ileus dissolved. He was discharged in a good clinical condition. 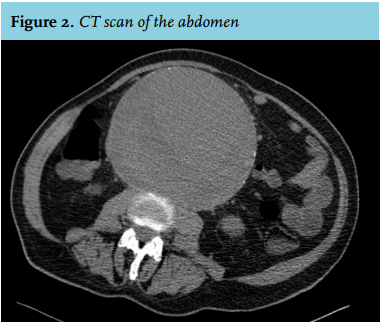 The authors report no conflicts of interest. No funding or financial support was received.