Primary biliary cholangitis (PBC) is a chronic cholestatic liver disease of autoimmune origin that mainly affects middle-aged women.1 To date, ursodeoxycholic acid (UDCA) at a recommended dosage of 13-15 mg/kg/day is the only approved therapy.2,3
An association between laboratory parameters and outcome during treatment with UDCA was first reported in 1999.4 Angulo and colleagues showed that patients with serum alkaline phosphatase levels < 2 times the upper limit of normal (ULN) following six months of UDCA treatment were less likely to have treatment failure. Subsequent studies found that not only levels of alkaline phosphatase,5-7 but also other biochemical variables including aspartate transaminase (AST), bilirubin and albumin values, following one or two years of UDCA treatment were predictive of liver transplant-free survival.8-11 Generally, patients fulfilling the criteria for biochemical response were shown to have a normal life expectancy, comparable with a matched general population, while non-responders remained at risk for requiring liver transplantation or premature death.5
Generally, Paris-1 criteria are considered to have the best predictability of transplant-free survival as validated in large studies, such as from the Global PBC Study Group and the UK PBC Consortium,9,12-14 and their usage has been recommended by an international PBC expert panel.15 Despite the clear relevance of biochemical response to UDCA, it has not been established whether biochemical response is considered an important objective in clinical practice and is used to guide further decision-making, in particular on possible additional second-line treatment. Therefore, we aimed to assess to what extent laboratory parameters during UDCA treatment, using Paris-1 biochemical response criteria, influenced management decisions in a large and nationwide cohort of PBC patients.

Patient population
Patients were derived from a Dutch multicentre study16 and a large epidemiological study regarding primary sclerosing cholangitis and primary biliary cholangitis in the Netherlands.17 The protocol for this project was approved by the Central Committee for Research Ethics in Utrecht and the local ethics committees of participating hospitals (trialregister.nl no.: NTR2813).
Patients were diagnosed according to established criteria,2,3 and included between November 1988 and December 2011 across 43 university and general hospitals. Patients with concomitant liver disorders at initial diagnosis of PBC, such as viral, alcoholic and autoimmune hepatitis, were excluded.

Statistical analyses
Normally distributed data were expressed as mean ± standard deviation and skewed data were expressed as median and interquartile range (IQR). Differences between responders and non-responders were assessed by using the independent t-test and non-parametric Mann-Whitney U test, respectively. To assess differences between responders and non-responders concerning categorical variables, the Pearson’s chi-squared test was used. The Kaplan-Meier method was applied for time-to-event analysis and survival difference was tested with log-rank test. Logistic regression modelling was performed to assess the association between baseline factors and UDCA response after one year of follow-up in univariate and multivariable approaches.
A p < 0.05 was considered statistically significant. Analyses were performed using the statistical package of IBM SPSS Statistics 21.0 (SPSS Inc., Chicago IL, USA). The study started at initiation of ursodeoxycholic acid (UDCA). 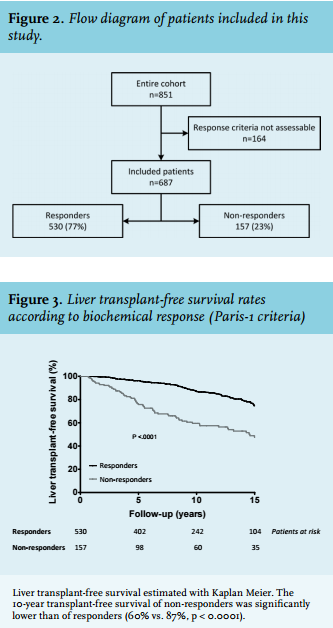 Study cohort
The study cohort comprised 851 UDCA-treated PBC patients. The Paris-1 criteria could be assessed in 687 (81%) patients; 77% of patients were classified as responders and 23% as non-responders (figure 2). Non-responders were generally younger, at a more advanced disease stage, diagnosed in an earlier era and had higher serum bilirubin, alkaline phosphatase, AST and ALT values and lower albumin at baseline (table 1).
The median follow-up period of the entire cohort was 8.8 years (IQR, 4.8-13.9) and follow-up for responders was significantly longer than for non-responders (9.2 vs. 7.8 years respectively, p = 0.047). During follow-up, 141 patients died and 30 underwent a liver transplantation (47 and 24 non-responders, respectively). Ten-year transplant-free survival for non-responders was significantly lower than for responders (60% vs. 87%, p < 0.0001) (figure 3).

Modification in management
Management was modified in 46/157 (29%) non-responders. The most frequently applied change was an increase in the UDCA dosage (26/46, 57%). Steroid therapy was started in only one non-responder. No other drugs were prescribed as second-line therapy. Nineteen patients were referred for a second opinion to a tertiary centre. For 6/157 (4%) non-responders management changes were not extractable from the medical charts.

Impact of increase in UDCA dosage
After one year of treatment with UDCA, the dosage was increased in a number of non-responders and responders within the following two years. Importantly, 9/26 (35%) of the non-responders became responders within the next two years following dosage increase. When applying the more strict Paris-2 criteria for response,10 6/48 (13%) of non-responders became responders. Eighteen of 26 (69%) non-responders in whom the UDCA dosage was increased were initially dosed inadequately (median daily dosage 9.60 mg/kg; IQR 8.80-11.16 mg/ kg) according to current treatment guidelines.2,3 Further analysis showed that this mainly applied to patients diagnosed in 1999 or before (median dosage 9.33 mg/ kg; IQR 8.21-9.93 mg/kg) and not for those diagnosed in 2000 or thereafter (median dosage 12.69 mg/kg; IQR 10.92-17.98 mg/kg). 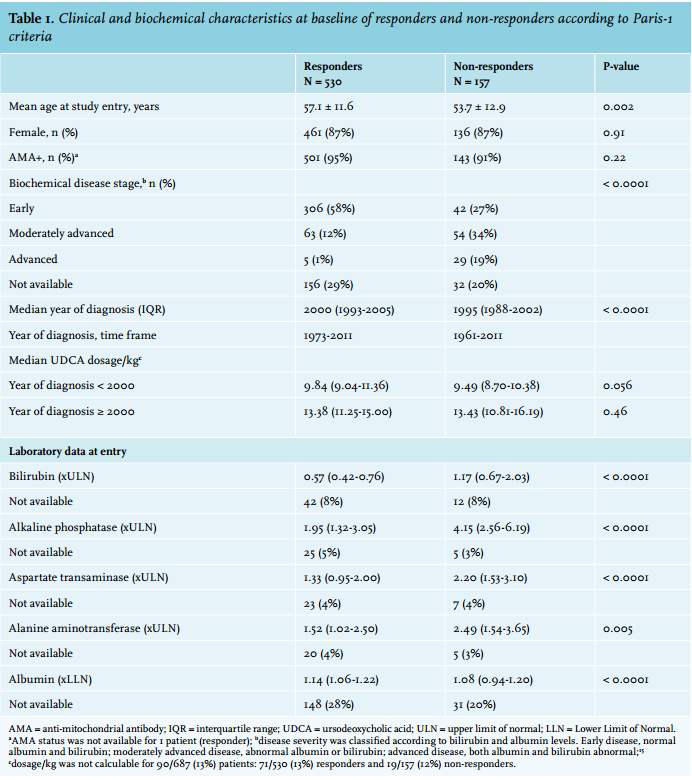 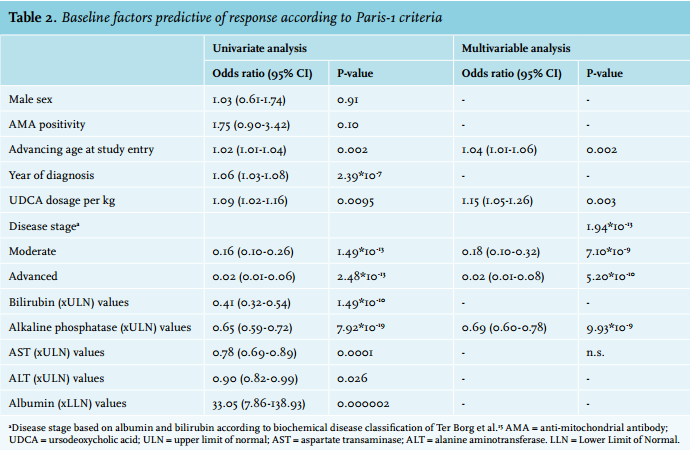 To our knowledge, this large nationwide multicentre cohort study in PBC is the first to assess potential changes in patient management prompted by the one-year response to UDCA treatment. We found that non-response to treatment did not result in management changes in nearly two-thirds of cases. In those patients in whom management was influenced, the most frequent change was an increase in the dosage of UDCA. Our data further showed that the proportion of UDCA non-responders in whom management was modified did not increase over time, suggesting that awareness of the concept of biochemical response in clinical practice may still be suboptimal.
Few data are available with respect to treatment policy based upon objective response criteria in PBC. Recently, preliminary data of an online survey among 200 gastroenterologists and hepatologists in the UK were presented;18 42% of gastroenterologists and 76% of hepatologists stated they used biochemical response criteria (e.g. Paris-1 criteria8 or Barcelona criteria5 ) to evaluate UDCA treatment. However, no information was provided about further treatment decisions based upon the observed response.
Obviously, the results of our study should be interpreted with caution. In particular, it must be recognised that the majority of included patients were treated with UDCA well before emergence of the concept of biochemical response and that, in the context of this study, this response was assessed retrospectively. Therefore, by definition, decisions with respect to patient management could not have been influenced by assessing treatment response with one of the currently available tools. Irrespective of a formal response evaluation, however, our data suggest that management was modified in only a minority of cases despite persistently, occasionally markedly, abnormal biochemical liver tests. Moreover, our data demonstrate that during the last decade, despite increased awareness of the importance of sufficient biochemical improvement upon treatment with UDCA, this did not yet translate into an increase in response-guided management in general medical practice.
Another major factor that must be stressed when interpreting the results of the present study is the lack of evidence-based alternative treatments for PBC until now. This may largely explain why potentially effective drugs, including budesonide and fibrates, were rarely used. During recent years, evidence is accumulating that fibrates may have an additional, beneficial effect in UDCA-treated PBC.19-23 The same applies to budesonide24-26 and obeticholic acid,27 drugs that are currently undergoing randomised controlled trial evaluation. It seems likely that within a few years the therapeutic scenario in PBC will have changed considerably and an evidence-based approach of response-guided treatment in PBC will be a reality, potentially with a number of second-line treatment options available.
Our study emphasises the importance of adequate UDCA dosing. About 40% of UDCA non-responders in whom the dosage was increased became responders according to the criteria we used. Indeed, a multivariable analysis of factors predictive of response confirmed that higher UDCA dosage per kilogram was an independent predictor of response. These findings are in line with previous studies showing that UDCA doses in the range of 13-15 mg/kg/day are more effective than lower doses.28,29 Therefore, adequate dosing of UDCA remains of crucial importance.
A potential weakness of our study is its retrospective character, occasionally necessitating the retrieval of data from hand-written patient records more than 20 years old. Also, it may be very well possible that management changes did occur more frequently than documented in the present study, but that this was after more prolonged follow-up. On the other hand, we believe that this study of a large PBC population gives a unique and representative insight into general clinical practice since it was not restricted to high-volume university centres but also involved many smaller community hospitals.
In conclusion, in this long-term cohort study of PBC we found that changes in medical management occurred in a minority of patients who, retrospectively, responded insufficiently to UDCA treatment. During the last decade this did not change despite the emergence of established stratification tools. Now new therapeutic options for PBC are becoming available, awareness of the concept of biochemical response requires further attention.

This investigator-initiated study was funded by the Foundation for Liver and Gastrointestinal Research (a not-for-profit foundation) in Rotterdam, the Netherlands. This Foundation had no influence on the study design, data collection and analyses, writing of the manuscript, or on the decision to submit the manuscript for publication. Funding obtained by B.E. Hansen and H.R. van Buuren

The authors have no conflicts of interest to declare.