Hydroxychloroquine is well known for its antimalarial, antirheumatic and antilupus properties.
Hydroxychloroquine poisoning is a rare but often fatal intoxication due to mainly cardiovascular toxicity. We present two patients who survived severe intoxication with hydroxychloroquine, in a dose that was previously considered to be lethal, using the usual supportive care and intravenous lipid emulsion.

The first case involves a 25-year-old female who ingested about 17.5 grams of hydroxychloroquine and about 550 mg diazepam in a suicide attempt, approximately one hour before presentation. An ECG showed QRS widening (figure 1). Abnormal lab results included a hypokalaemia of 2.7 mmol/l (table 1). After an initially agitated state, she became unconscious, and developed hypotension, vomiting and eventually apnoea. The patient was intubated and intravenous access was established to administer norepinephrine, which was titrated to aim for a mean arterial blood pressure above 65 mmHg. Diazepam was given in a dose of 2 mg/kg/24 hours and this therapy was continued during the following eight days. Intravenous lipid emulsion 20% was started in a bolus of 1.5 ml/kg (100 ml) followed by continuous infusion of 0.25 ml/kg/min (400 ml) for 30 minutes, in an attempt to decrease the uptake of the lipophilic hydroxychloroquine. To treat the decreased ventricular conduction, 100 ml of sodium bicarbonate 8.4% was also administered. A bolus of potassium chloride (40 mmol) was given to supplement the hypokalaemia. After these interventions, haemodynamic stability was established within a few hours. Retrospectively, hydroxychloroquine serum concentration measured using liquid chromatographytandem mass spectrometry1 at admission was 5.5 µg/l. The hydroxychloroquine levels were measured several times in the next few days, showing a slow decline over time, which can be explained by the large volume of distribution (figure 2). Two days after admission, the ECG showed a prolonged QTc interval (figure 2), and serum cardiac enzymes were elevated (table 1). Both normalised within a few days. Transoesophageal echocardiography showed an overall decreased function, confirming cardiomyopathy. The potassium levels remained stable throughout admission, and a cautious approach was taken towards supplementation of potassium. Due to pleural effusion and sedation, the patient was intubated for eight days. Two days later she was transferred to the psychiatric department for further treatment of her suicidal symptoms and borderline behaviour. The patient recovered without sequelae.

The second case concerned a 25-year-old male who ingested about 5 grams of hydroxychloroquine, 10 mg codeine and 10 mg domperidone. On presentation to the emergency department, two hours after intake, his symptoms consisted of vomiting, a QTc of 580 ms (figure 1) and a hypokalaemia of 2.7 mmol/l (table 1). Knowing the positive outcome of the first case, this patient was also treated with the same dose of intravenous lipid emulsion, diazepam 2 mg/kg/24 hours, a restrictive policy towards supplementation of potassium and alkalisation of the blood using 100 ml of sodium bicarbonate 8.4%. The patient remained haemodynamically stable without signs of cardiomyopathy other than QTc prolongation. Therefore, vasopressor agents were not required. In the following days, the hydroxychloroquine levels and QTc gradually declined (figure 2). The patient recovered without sequelae. 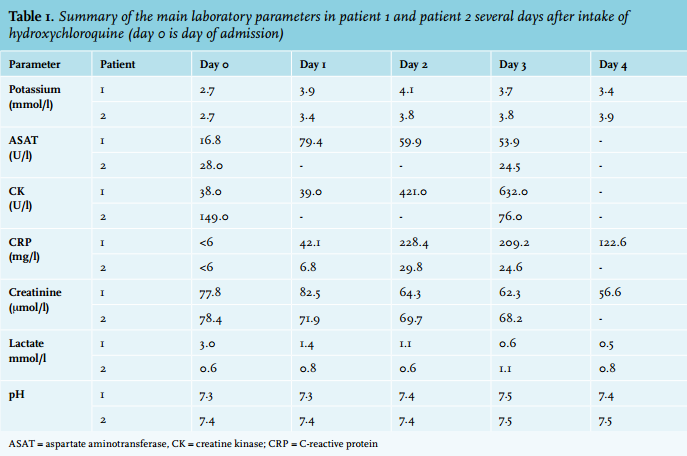 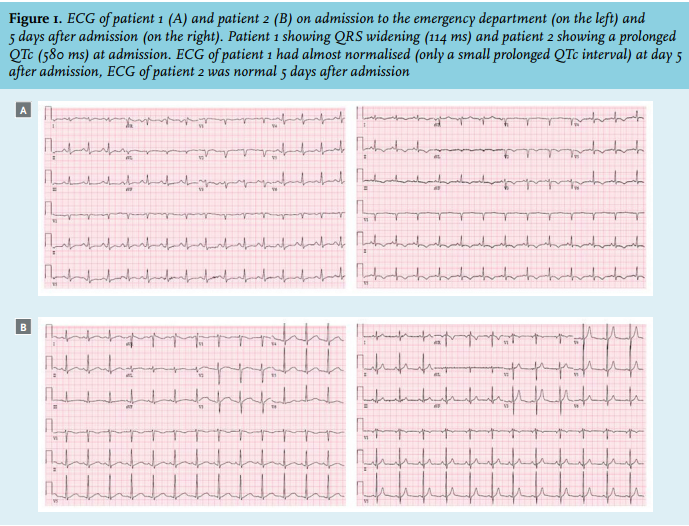 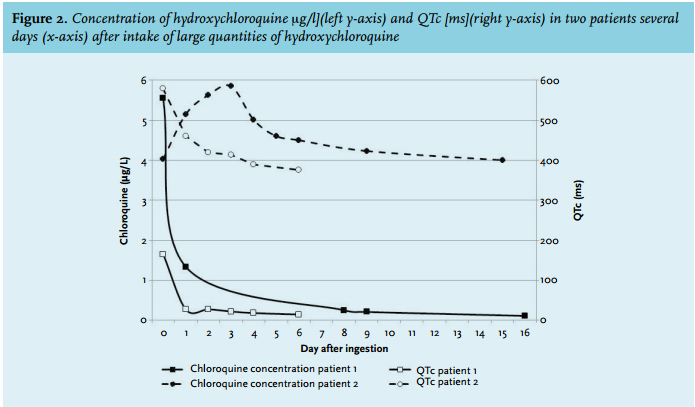 Intoxications with hydroxychloroquine often result in a fatal outcome. Our observations have demonstrated that, besides the usual supportive treatment with norepinephrine, diazepam and mechanical ventilation, the early supplemental use of intravenous lipid emulsion might be a safe and effective treatment to prevent cardiac toxicity after possible lethal intoxication with hydroxychloroquine.