Answer to Photo Quiz: Acute-onset breathlessness after a radiological procedure 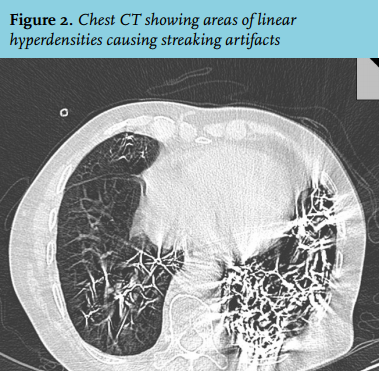 Chest CT revealed extensive areas of linear hyperdensities causing streaking artefacts along the tracheobronchial tree up to the level of the distal bronchioles (figure 2).

A diagnosis of barium aspiration was made on the basis of the history and radiological findings. The patient was managed with intravenous antibiotics (piperacillin/ tazobactam and metronidazole), steroids (hydrocortisone), inhaled bronchodilators and supplemental oxygen, and received chest physiotherapy. He made a complete recovery and is on regular outpatient follow-up with no long-term sequelae at six months.

Barium swallow is a routine procedure in the evaluation of the oropharynx and oesophagus. The contrast medium commonly used is barium sulphate, an insoluble salt of barium. Aspiration of barium sulphate is a well-known complication. Risk factors include extremes of age, disordered swallowing, neuromuscular dysfunction, broncho-oesophageal fistula, alcoholism, head and neck cancer and functional gastrointestinal disorders. In our patient, the only risk factor for aspiration was his age. The extent and region of lung involvement depend on the position of the patient during and after aspiration. Diagnosis is usually made by chest X-ray or detection of barium during bronchoscopy. Barium is considered to be an inert material; however, acute respiratory distress, pneumonitis, sepsis and death have been reported after barium aspiration, especially with large volume aspirations.1,2 The prognosis depends on the density and quantity of aspirated contrast, distribution of barium in the airways, the general condition of the patient and whether concomitant aspiration of gastric contents has occurred. There are no defined protocols for the management of barium aspiration. Bronchoscopic clearance of aspirated contrast is recommended in large volume aspiration and is aimed at removing as much barium as possible from the respiratory tract. Antibiotic therapy should be administered if associated infection is suspected and chest physiotherapy with postural drainage can assist in clearance of barium from the respiratory tract.3 Iso-osmolar or low-osmolar contrast media can be used as a safe alternative to barium sulphate in patients at risk of aspiration, since they are associated with minimal morbidity or mortality risk if aspirated.4