Testing for Cushing’s syndrome is common daily practice, since many of the signs and symptoms of this syndrome are nonspecific and common in the general population. Moreover, the increasing prevalence of adrenal incidentaloma has augmented the need for testing to exclude Cushing’s syndrome.1 Therefore the 1 mg dexamethasone suppression test (DST), as a first-line screening test in the work up for Cushing’s syndrome, is commonly used in clinical practice. In this test serum total cortisol concentration is measured after oral administration of 1 mg of dexamethasone. At a cut-off value of 50 nmol/l the DST has a high sensitivity (95%) and a reasonable specificity (80%).2-4
Test results may be influenced by the use of drugs altering the clearance of cortisol, such as CYP3A4 inhibitors and inducers, or causing an elevation of protein-bound cortisol fraction. In serum, cortisol is bound to albumin and cortisol-binding globulin. A small fraction is unbound and metabolically active.5 Oral contraceptives increase the total cortisol concentration by increasing circulating cortisolbinding globulin, whereas the unbound fraction is not influenced.6 Thus, in women using oral contraceptives, measurement of total cortisol in a 1 mg DST could be elevated although no increased activity of cortisol is present.
As a consequence, false-positive test results are found in up to 50% in women using oral contraceptives.2 In clinical practice, oral contraceptives are usually discontinued for six weeks in order to prevent false-positive results of the DST. However, evidence for this practice is lacking. Previously it was suggested that serum cortisol 16 hours after ingestion of 1 mg of dexamethasone is not influenced by oral contraceptives.7,8 Another suggestion to overcome the influence of oral contraceptives in the DST was to perform the test with double-dosed dexamethasone.9 We performed a study to determine if a 1 mg DST can be reliably performed at the end of a seven-day break from oral contraceptives. While urinary and salivary cortisol is not bounded to cortisol-binding globulin and therefore supposed not to be influenced by oral contraceptives, we also determined cortisol in late-night sampled saliva and in 24-hour urine samples.10-12

The study was approved by the Central Committee on Research Involving Human Subjects (CCMO) under number NL31515. Fifteen healthy female volunteers, aged 18-55 years old, who were using oral contraceptives containing at least 30 µg of ethinyl oestradiol were recruited. Exclusion criteria were Cushing’s syndrome, or using medication that influences cortisol metabolism (e.g. phenytoin, barbiturates, ephedrine, rifampicin). Pregnancy was excluded in all patients by a pregnancy test. Two subjects withdrew from the study for personal reasons. Here we present the results of the 13 subjects who completed the study.
Standard 1 mg DSTs were performed in all participants. These volunteers were given 1 mg of dexamethasone orally at 23.00 hours. The next day blood samples were taken between 8.00 and 9.00 hours, measuring fasting total serum cortisol using an electrochemiluminescence immunoassay (ECLIA) on the Cobas e601 platform (reference < 50 nmol/l). One day before the DST was performed, participants collected a late-night saliva between 23.00 and 24.00 hours using a salivette with a polyester swab (Sarstedt) and a 24-hour urinary sample. Cortisol concentrations in saliva and urine were measured with an ECLIA, reference values < 15 nmol/l and < 0.38 µmol/24 hours, respectively.13 Prior to analysis, the urine samples were prepared with a dichloromethane extraction procedure. All tests were performed while oral contraceptives were being used and repeated one and six weeks after discontinuation of the oral contraceptives.
The primary endpoint was the level of fasting cortisol in the 1 mg DST after discontinuation of the oral contraceptive. The differences in cortisol levels were compared pair-wise with each other (longitudinally).
Secondary endpoints were the longitudinal changes in late-night salivary cortisol and 24-hour urine cortisol. 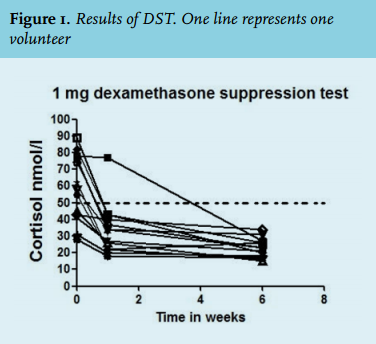 Eight of thirteen volunteers had inadequate suppression in the 1 mg DST while using contraceptives (‘positive test’). One week after cessation of the oral contraceptive, the number of positive tests decreased to one, excluding Cushing’s syndrome in 38% and 92% respectively (p < 0.02). After six weeks, none of the 1 mg DSTs were positive (figure 1).
The 24-hour urinary cortisol excretion was not significantly elevated in any of the participants. All results of the late-night salivary cortisol measurements were below the cut-off value, except for one sample (40 nmol/l) (figure 2). Hypercortisolism was not established in any of the participants.

This study shows that the 1 mg DST can be performed reliably one week after cessation of oral contraceptives.
In our study we were able to exclude hypercortisolism in 12 of 13 (92%) volunteers one week after cessation of oral contraceptives. The one subject with insufficient cortisol suppression was using an oral contraceptive containing 30 mg ethinyl oestradiol, comparable with the dosage used in the other subjects in our study. None of the 24-hour urinary cortisol samples and just one late-night salivary cortisol level were elevated, indicating that the DST was correctly ruling out Cushing’s disease. The reason for the outlier in salivary cortisol may be minor intra-oral bleeding, although the cause in this specific case was unclarified. The subject was different from the one with inadequate cortisol suppression in the DST.
Our data endorse the previous literature where the influence of ethinyl oestradiol on total cortisol was described. This is caused by elevated cortisol-binding globulin levels without an increase in the fraction of free cortisol, the biologically active cortisol. Since total cortisol is measured in the standard 1 mg DST, oral contraceptives containing ethinyl oestradiol make the DST unreliable. This relationship has been demonstrated before, although the duration of the influence of oral contraceptives on cortisol-binding globulin, and thereby on the 1 mg DST, remained unclear.6-8
This is in contradiction with previous literature in which the effect of oral contraceptives on the DST was considered very limited or nearly absent.7,8 The strength of our study is that we repeated the DST in the same subjects, thereby demonstrating that this test is actually more often false-positive while using oral contraceptives and normalises when these drugs are discontinued.
In clinical practice, oral contraceptives are often discontinued for six weeks before a DST is performed, to rule out any influence of ethinyl oestradiol on the test results. However, this practice is patient unfriendly and may delay the diagnostic workup. Given the high diagnostic yield after just one week of cessation of contraceptives in our study, we propose a different procedure in which the dexamethasone suppression test is performed one week after withdrawing the contraceptive. In case of inadequate suppression, a second suppression test can be performed after the usual period of six weeks of withdrawal.

In conclusion, in this study we have shown that a 1 mg DST can reliably be performed one week after withdrawal of contraceptives containing ethinyl oestradiol. In case of inadequate suppression, a second suppression test can be performed after the usual period of discontinuation of six weeks. Alternatively, salivary and urinary cortisol can be measured, since oral contraceptives do not influence these measurements.10-12 The accelerated performance of the DST does not cause a loss of the diagnostic value of the test, and is much more patient friendly, because women do not have to extend their discontinuation of use of oral contraception to more than one week. Moreover, the reliability of the contraception is not disturbed when DST is performed at the end of a seven-day break of oral contraception usage.