In most centres, standard treatment for differentiated thyroid carcinoma (DTC) comprises total thyroidectomy followed by radioiodine (131I) ablation. In low-risk patients the aim of 131I ablation is to destroy thyroid remnants and local micro-metastases, and to facilitate the use of serum thyroglobulin measurements to detect disease recurrence.1,2 In high-risk patients complete thyroid ablation is needed to enable optimal 131I uptake in metastases.
The optimal dose of radioiodine that is required for successful remnant ablation is under debate.3 Historically, ablation doses have varied from 740-5550 MBq (20-150 mCi).4 Recently it has been suggested that thyroid ablation using low-dose 131I (1110 MBq, 30 mCi) may be equally successful as high-dose treatment (3700 MBq, 100 mCi) in patients with DTC tumour stage T1-T3 without evidence of microscopic residual disease or distant metastasis.5,6 These findings are likely to have a major impact on the treatment of DTC worldwide. It coincides with the gradually increasing concern for long-term adverse events of 131I treatment, and the wish to reduce radiation exposure and shorten hospital isolation time. The Dutch guideline on treatment of DTC has already been adjusted based on the results of these studies. Recognising that 91% of the patients included in these studies had T1-T2 tumours, this guideline now recommends the 1110 MBq dose for thyroid remnant ablation for patients with T1-T2 DTC.5-7
The criteria to define successful ablation in the two landmark studies referred to above were thyroidstimulating hormone (TSH)-stimulated thyroglobulin levels less than 1.0 and 2.0 µg/l, respectively (i.e. about 10 times the assay’s detection level), combined with a negative 131I diagnostic whole body scan (185 Mbq, 5 mCi) and/or negative neck ultrasound 6-9 months after ablation.5,6 However, it is uncertain whether these surrogate short-term markers can reliably predict differences in long-term outcome. Accurate prediction of long-term outcome is a major challenge in low-risk DTC because recurrent disease develops very slowly. About 10-15 years of follow-up are required to obtain a well-founded assessment of treatment efficacy.8
As residual disease not detected at completion of initial treatment is the main risk factor for ‘disease recurrence’ it will be important to employ the most sensitive technique available for the detection of thyroid remnants. In the present study, we report the results of 2775 MBq (75 mCi) 131I ablation, using the combination of an undetectable thyroglobulin after thyroid hormone withdrawal and a negative post-therapy whole body scan as criteria for successful thyroid ablation.

Study design, setting and patients
This is a retrospective observational cohort study performed in a tertiary teaching hospital. We included adult patients (>18 years) treated for DTC in the period 1998-2012. The inclusion criteria were:
(1) histologically confirmed papillary or follicular thyroid carcinoma, without evidence of microscopic residual disease;
(2) TNM stage T1-T3, N0 or N1, and no evidence of distant metastases (M0);
(3) Ablation dose 2775 MBq; and
(4) Presence of thyroid remnant uptake on the post-ablation 131I whole body scan one week after ablation.

Treatment
The treatment schedule used in this study is summarised in figure 1. Thyroidectomy was performed by dedicated thyroid surgeons with a personal thyroid surgery volume of at least 30, predominantly benign, cases per year. A total of four different surgeons were involved during the study period. Pre-ablation scintigraphy for assessment of the percentage neck retention was discontinued in 2000 because previous measurements had repeatedly demonstrated retentions < 5%. Thyroid hormone replacement was withheld until 131I ablation, which was performed four weeks after surgery. All patients received a fixed 2775 MBq (75 mCi) 131I ablation dose. This has been the standard treatment for T1-T3 DTC in our centre for the past 20 years. Whole body scanning was performed one week after ablation. All patients demonstrating thyroid remnant uptake on the post-ablation scan received a 5550 MBq therapeutic dose of 131I, 6-9 months later, after thyroid hormone withdrawal for four weeks. Patients were instructed to take a low iodine diet for one week before both ablation and therapy.

Statistical analysis
Results are shown as median values and range. Descriptive statistics were used to summarise the data. A paired t-test was used to evaluate the change in thyroglobulin levels after ablation. A p-value < 0.05 was considered to be statistically significant.

Between 1998 and 2012, 111 patients underwent total thyroidectomy and 131I thyroid remnant ablation for DTC (figure 2). Thirty-four patients did not meet the inclusion criteria that were set for this study. The reasons for exclusion were: post-ablation or post-therapy scan images not available (n = 15), tumour stage T4 (n = 9), distant metastases (n = 3), ablation dose < 2775 MBq (n = 4), and no remnant uptake after 131I ablation (n = 3). The baseline characteristics of the 77 patients included in the study are summarised in table 1. Of the patients, 83% had papillary carcinoma and 17% had follicular carcinomas. Patients with mixed papillary/follicular carcinoma were classified as papillary carcinoma, and those with Hurthle cell carcinoma were classified as follicular carcinoma. DTC was multifocal in four patients (5%); 81% had T1-T2 tumours, including two patients with a T1a tumour. The remaining patients had T3 tumours (19%). Microscopic examination indicated that carcinoma resection had been radical in all patients. Neck lymph node involvement, either based on tissue examination or by post-ablation 131I uptake outside the thyroid bed, was diagnosed in 10% of patients. Lymph node involvement was found in 10% of T1 tumours, in 16% of T2 tumours and in 0% of the patients with T3 tumours. Anti-thyroglobulin antibodies were present in 13/77 (17%) of patients. Thyroglobulin levels at ablation were not available in 8/64 anti-thyroglobulin negative patients. Six months later the number of patients with anti-thyroglobulin antibodies had declined to 6 (8%), and the number of anti-thyroglobulin negative patients with missing thyroglobulin-off measurements had decreased to 4/71 (6%). 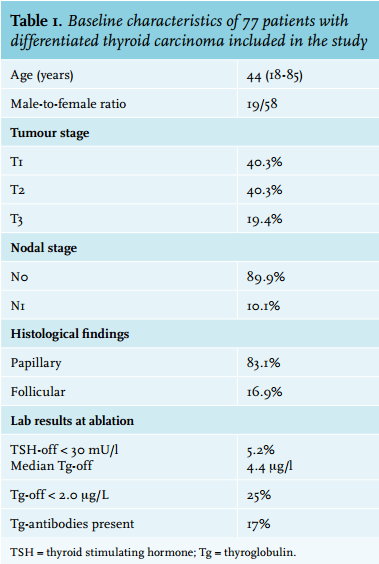 This study demonstrates that a 2775 MBq 131I ablation dose is associated with complete ablation in only 26% of patients if judged by very rigorous criteria. Complete ablation increased to 38% if defined as negative thyroid bed uptake, and to 55% if defined as an undetectable serum thyroglobulin upon thyroid hormone withdrawal in anti-thyroglobulin negative patients. All these figures are much lower than the recently reported success rates of 90% after an ablation dose as low as 1110 Mbq.5,6 Several factors may explain the low success rate we observed with an ablation dose that was 2.5 times higher than used in these two comparator studies. More extensive pre-surgical disease may have contributed but a major impact is considered unlikely. In Mallick’s study 22% of patients had T3 tumours, whereas patients with T3 tumours were excluded in Schlumberger’s study. Despite this marked difference in tumour load, the ablation success was comparable for both studies, suggesting that pre-surgery tumour size was not an important determinant of ablation success. This is also supported by our observation that after the exclusion of the patients with T3 tumours, ablation success only increased from 26 to 27%. In contrast, post-surgery remnant thyroid tissue volume, judged by median post-surgical thyroglobulin levels at ablation, may have had an impact. The median postoperative thyroglobulin level of 4.4 µg/l in our population was nearly twice as high as that observed in Mallick’s study and this could have reduced our ablation success rate to some extent. However, the marked difference in outcome is probably best explained by differences in the definition of ablation success. In the present study this was defined as a serum thyroglobulin below the assay detection level and no visible uptake in the thyroid bed on a post-therapy scan performed one week after a 5550 Mbq dose of 131I, administered 6-9 months after ablation. This is currently the most rigorous definition of ablation success. In contrast, the two comparator studies used a more lenient definition of ablation success. They employed a thyroglobulin cut-off of 1.0 and 2.0 mg/l, respectively, i.e. cut-offs that were well above their assay’s functional detection limits and 5-10 times higher than in our study, thus reducing the sensitivity to detect remnant thyroid tissue and increasing the chance of an ablation being incorrectly classified as successful. Nevertheless, the impact of these differences in thyroglobulin cut-offs is probably small. When we used a thyroglobulin cut-off of 2.0 µg/l, ablation success barely increased, i.e. from 26% to 29%. This strongly suggests that differences in imaging technique, in particular the difference in sensitivity of a 185 MBq diagnostic whole body scan as compared with a 5550 MBq post-therapy scan, is the most important factor explaining the differences in ablation success. Obviously, a more sensitive technique to detect thyroid remnants will result in lower success rates.
If complete remnant ablation is crucial to achieve the lowest possible recurrence of disease, then the most rigorous criteria for successful ablation should be employed to avoid incorrect classifications of complete remission. This implies that efficacy and safety of new approaches such as lowering of the ablation dose, the decision to discharge low-risk patients from outpatient monitoring five years after achievement of complete remission, etc., should be tested against these strict criteria. More lenient criteria will increase short-term success rates but are likely to increase long-term recurrence rates. With these considerations in mind, and the observation that a 2775 MBq ablation dose fails to achieve complete remnant ablation in at least two-thirds of the patients, it appears unwise to lower the ablation dose to 1110 MBq without evidence of the long-term consequences of such a policy, or without concomitant recommendations of follow-up strategies that guarantee early recurrence detection and effective (rescue) treatment schedules. Disproportionate concern about the potential risk of second primary malignancy after 131I treatment should not dominate the discussion about the most appropriate ablation dose. In a recent study of nearly 2500 patients with DTC, this risk only increased after a cumulative dose of 37,000 MBq (1000 mCi).9 At present, the evidence favouring either high- or low-dose ablation remains inconclusive. Low-dose treatment and lenient criteria of ablation success may give rise to an increasing number of patients with serum thyroglobulin levels exceeding the limit of detection during follow-up. This may create diagnostic and therapeutic dilemmas that are yet unresolved and cause an increase in patient anxiety. For example, definitive answers to questions such as which thyroglobulin cut-off levels are safe to distinguish normal residual thyroid tissue from persistent thyroid cancer are still under debate.10 On the other hand, high-dose ablation and follow-up with very strict criteria for cure are likely to be associated with a higher number of 131I treatments, adverse events related to episodes of thyroid hormone withdrawal, longer time spent in hospital and a higher total cumulative dose of 131I, and might be considered to be overtreatment. As long as the benefit-to-harm ratio of both approaches is not known, we recommend caution in the follow-up of patients treated with low-dose ablation.

In conclusion, most patients in this study had persistent thyroid remnants despite 131I ablation with a dose that was 2.5 times higher than the dose recently recommended for the ablation of T1-T2 DTC. This observation may serve to illustrate that careful monitoring is warranted after low-dose ablation therapy, and that follow-up guidelines may need to be redefined to optimise detection of disease recurrence and to adjust the specifications of the indications of treatment. Long-term studies comparing the results of low- and high-dose ablation will be required to further clarify the impact of the 1110 MBq ablation dose on disease recurrence rates and mortality.