In the last decades, malnutrition and the institution of appropriate nutrition in malnourished patients are receiving increasing attention by clinicians. In parallel, alertness for the development of refeeding syndrome has been emphasised.1,2 Early detection is considered to be of utmost importance to prevent the development of its clinical sequelae.
Although there is no universally accepted definition of refeeding syndrome, it can be defined as a potentially fatal shift in fluids and electrolytes that may occur after reintroducing nutrition in malnourished patients.3 The pathophysiological mechanism relies on a transition from a catabolic state, in which fatty acid oxidation is the main source of energy, to an anabolic state, where mainly combustion of carbohydrates provides the energy. During this process, the metabolism of phosphate and thiamine increases and there is a shift of potassium and magnesium to the intracellular environment. Combined with the existing depleted state of electrolytes and enzymes due to malnutrition, low plasma levels of phosphate, potassium, magnesium and thiamine are likely to occur.4-6 Disorders of glucose metabolism have also been described.7
The clinical spectrum of refeeding syndrome is diverse and ranges from a paucity of signs and symptoms to a multisystem disorder.8-11 Muscle weakness is an aspecific symptom and is caused predominantly by hypophosphataemia. Besides, tachycardia can occur during the early stage of refeeding syndrome due to volume overload, which is caused by renal sodium and fluid retention owing to high levels of insulin.
Several risk factors for the development of refeeding syndrome have been identified. These include acute or chronic malnutrition, alcohol abuse, old age, oncological diseases, and malabsorption.12 Patients taking antacids or diuretics, which is accompanied by a loss of electrolytes via the gastrointestinal tract or kidneys respectively, also have a higher risk of developing refeeding syndrome.13
The incidence of refeeding syndrome varies in different studies, partially due to the lack of a universally accepted definition.3 Most studies were done in surgical or ICU patients. Marik & Bedigian found that 34% of intensive care patients experienced refeeding hypophosphataemia.14 Among all hospital patients started on artificial nutrition, Rio et al. found a 1% incidence of refeeding syndrome.15 Camp & Allon found a 10.4% incidence of hypophosphataemia among malnourished patients in a Veterans Administration Hospital.16 To our knowledge, no studies have been performed in a large group of internal medicine patients.
Since a practical definition and objective criteria for refeeding syndrome seem to be lacking, patient management is not supported by generally accepted guidelines.
The National Institute for Health and Care Excellence (NICE) criteria for identifying patients at high risk for the development of refeeding syndrome may provide clinicians a useful tool in daily practice (table 1).13 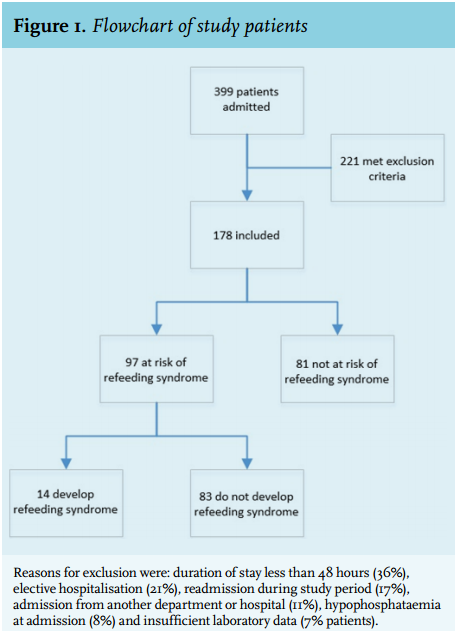 In this prospective observational study we aimed to determine the incidence of refeeding syndrome in patients acutely admitted to the department of internal medicine. We also aimed at defining risk factors for the development of refeeding syndrome and to measure the time between hospitalisation and its occurrence. We examined whether muscle strength, heart rate and a scoring system (Short Nutritional Assessment Questionnaire, SNAQ) are associated or predictive for its development.17

This study was performed at the Department of Internal Medicine of the Sint Lucas Andreas Hospital in Amsterdam, the Netherlands. This is a general inner city teaching hospital. The local Medical Ethics Committee approved the study and patients gave their informed consent. Between 22 February 2011 and 29 April 2011, all patients admitted to the department of internal medicine were included. Exclusion criteria were elective hospitalisation, readmission during study period, duration of stay less than 48 hours, admission from another department or hospital or the presence of hypophosphataemia at admission. Patients were followed during the first seven days of hospitalisation.
Refeeding syndrome was defined as follows: a syndrome of electrolyte shifts, hypophosphataemia being a fundamental condition, which might occur as a result of reintroduction of caloric intake after a period of malnutrition or fasting.
We applied the NICE criteria for determining people at high risk of developing refeeding problems in all patients acutely admitted (table 1). We excluded patients with hypophosphataemia at admission since the occurrence of hypophosphataemia is used as a hallmark for the occurrence of refeeding syndrome. Refeeding syndrome was established in patients with a positive NICE score and normal phosphate levels at admission who developed severe hypophosphataemia during follow-up.
Reference values for normal phosphate levels were 0.75-1.20 mmol/l in men and 0.90-1.30 mmol/l in women. Severe hypophosphataemia was defined as a phosphate level < 0.60 mmol/l.
The SNAQ is a validated screening tool and is frequently used in Dutch hospitals to determine people at risk of malnutrition (table 2).17 We investigated whether this score could also be used to identify patients at risk of refeeding syndrome.
To objectively evaluate possible clinical effects of refeeding syndrome, we measured muscle strength and heart rate. Handgrip strength was used as a measure of peripheral muscle strength, which is applied in a wide variety of studies.18,19 Handgrip strength was measured on the dominant side on days 1, 3 and 7 using the JAMAR hand dynamometer (Lafayette Instrument Company, UK). The JAMAR hand dynamometer has proven to be reliable in terms of test-retest and intra-tester reliability for the measurement of handgrip strength.20 Heart rate was recorded daily.

Statistical analysis
Statistical analysis was performed using SPSS Statistics version 20 (IBM Corporation, New York). Continuous variables are expressed by their mean (standard deviation). Categorical variables are expressed as n (%). Normally distributed data were compared by the independentsample t test and not normally distributed data by the Mann-Whitney U test. Categorical data were compared by the Chi square test or the Fisher’s exact test, as appropriate. A two-sided p < 0.05 was considered to be statistically significant.

A total of 399 patients were admitted to the Department of Internal Medicine of the Sint Lucas Andreas Hospital (figure 1). We included 178 patients who were acutely admitted; 221 patients were excluded due to duration of stay less than 48 hours (36%), elective hospitalisation (21%), readmission during the study period (17%), admission from another department or hospital (11%), hypophosphataemia at admission (8%) or insufficient laboratory data (7% patients).
The baseline characteristics of the 178 patients included in our study, assessed for the risk of developing refeeding syndrome, according to the NICE criteria, are shown in table 3. The mean age was 66.8 years (±17.4). The ratio of men to women was about equal. The mean body mass index (BMI) was 24.4 kg/m2 (±6.4) and mean follow-up was 6.3 days (±1.3). 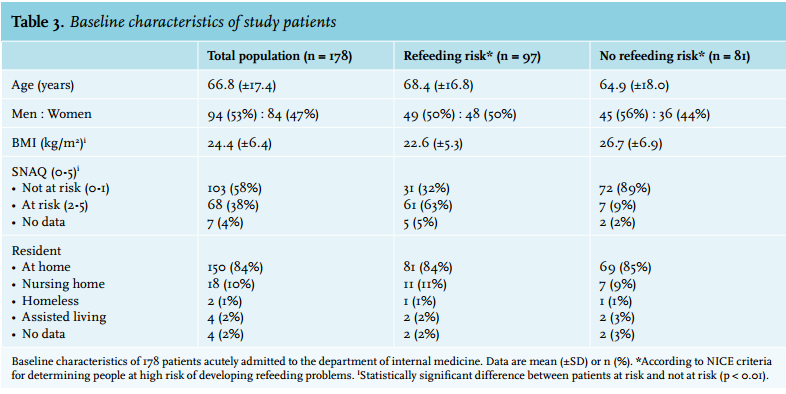 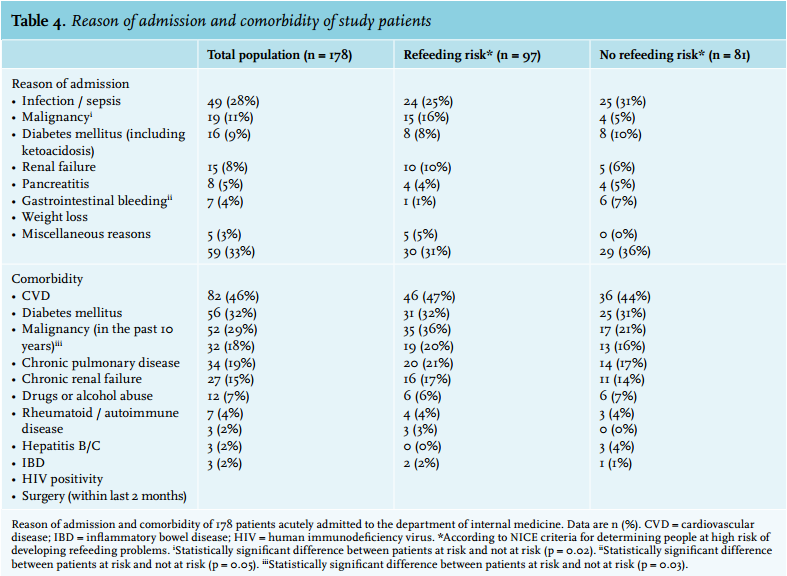 Phosphate levels
Figure 2 shows phosphate levels during admission in all patients and according to risk stratification based on the NICE scores. A total of 15 patients developed severe hypophosphataemia during follow-up, of whom 14 had a positive NICE score and one had a negative NICE score at admission.
For all patients who developed refeeding syndrome during follow-up, the difference between baseline phosphate and the lowest measured value was a mean of 0.60 mmol/l (±0.23). The sharpest declines in phosphate levels were observed on days 2 and 3. The mean lowest measured value of phosphate was measured on day 5 (±1.8). 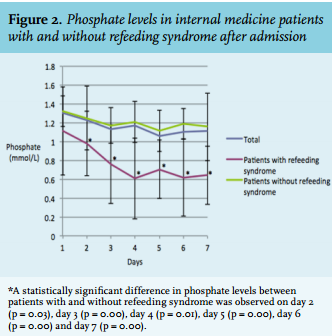 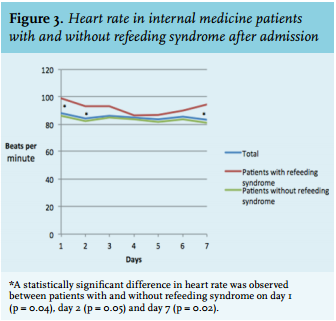 In conclusion, the incidence of refeeding syndrome is relatively high in patients acutely admitted to the department of internal medicine. Of all patients admitted to our internal medicine department, 8% developed refeeding syndrome. Patients with a malignancy or previous malignancy are at increased risk of developing refeeding syndrome. Clinicians should be aware of this risk when feeding these patients. When taking the occurrence of hypophosphataemia as a hallmark, no other objective parameters were identified in this study that may help to identify at risk patients at admission or during the hospital stay.

The authors have no potential conflicts of interest to be disclosed. This study had no external funding source.
The local Medical Ethics Committee approved the study protocol. All patients gave verbal informed consent.