Dutch guidelines for the diagnosis and treatment of chronic lymphocytic leukaemia

In recent years, considerable progress has been made in the treatment of patients with chronic lymphocytic leukaemia (CLL). Within the Dutch/Belgium Haemato-Oncology Foundation for Adults in the Netherlands (HOVON) framework, the purpose of the HOVON CLL working group is to facilitate access to new treatments and contribute to the development of new treatment options. Besides conducting six trials in recent years, the HOVON CLL working group also formulated the Dutch guideline on diagnosis and treatment of CLL in 2011.1 Recently, this guideline was revised based on new studies and the expert opinion of members of the working group and published in the Nederlands Tijdschrift voor Hematologie. 2 This journal has been given permission to publish this current manuscript.

The diagnosis of CLL can be suspected when peripheral blood lymphocytosis is present and morphology shows smudge cells and small lymphocytes with dense nuclei and partially aggregated chromatin. The diagnosis should be confirmed by flow cytometry. The amount of circulating monoclonal B cells should be ≥ 5 x 109/l with an immunophenotype characteristic for CLL, with expression of CD19, CD5 and CD23 and weak expression of CD20. Additional expression of CD200 and CD43 can be seen. Expression of CD79b should be weak or absent and FMC7 should be absent. Bone marrow examination is not necessary, but may be indicated for differentiation of anaemia or thrombocytopenia due to bone marrow suppression or autoimmune destruction.
The diagnosis of small lymphocytic lymphoma (SLL) can be made if either palpable or radiographic lymphadenopathy is present, but when the number of circulating monoclonal B cells is < 5 x 109/l. Histopathological evaluation of the lymph node will show lymphoid cells with dense nuclei with partially aggregated chromatin in combination with a CLL / SLL appropriate immunophenotype.3

Additional examination
Additional examinations are needed for staging the disease, to detect complications of the disease (haemolysis, autoimmune thrombocytopenia, hypogammaglobulinaemia) and to diagnose active or chronic infection which may be aggravated by treatment with monoclonal antibodies (hepatitis B, C). Prognostic markers (cytogenetics, especially del(17p) and p53 mutation) are required in studies and are strongly recommended in daily practice if treatment is indicated. IgVH mutational status is required in studies and optional in daily practice.
In daily practice, imaging studies are of little value. An abdominal ultrasound is not necessary if all lymph node areas and the liver and spleen are easily palpable on physical examination. A chest X-ray is recommended to diagnose hilar lymphadenopathy and pre-existing lung abnormalities or infections.

Clinical stage and indications for starting treatment
The staging systems according to Rai and Binet are still used for indicating the start of treatment (table 1).4,5 In an advanced stage of the disease, there is always a treatment indication. In early stage disease, treatment is only indicated when active disease is present. The criteria for active disease consist of disease-related symptoms, bone marrow failure, refractory anaemia or autoimmune thrombocytopenia, and the presence and progression of splenomegaly, lymphadenopathy and lymphocytosis (table 2). Marked hypogammaglobulinaemia, a monoclonal protein or a high leukocyte count in the absence of any of the above criteria are not indications for treatment. Autoimmune phenomena, especially autoimmune haemolytic anaemia and immune thrombocytopenia, can occur and should be distinguished from cytopenias due to bone marrow infiltration. This can be done by blood testing (signs of haemolysis) but does require bone marrow examination in certain cases. Autoimmune cytopenias without signs of infiltration should be treated similarly to patients without CLL with prednisone 1 mg/kg, with tapering after response. If, in general, no response is seen after one month of treatment, response is less likely to occur and treatment of underlying CLL warranted.6 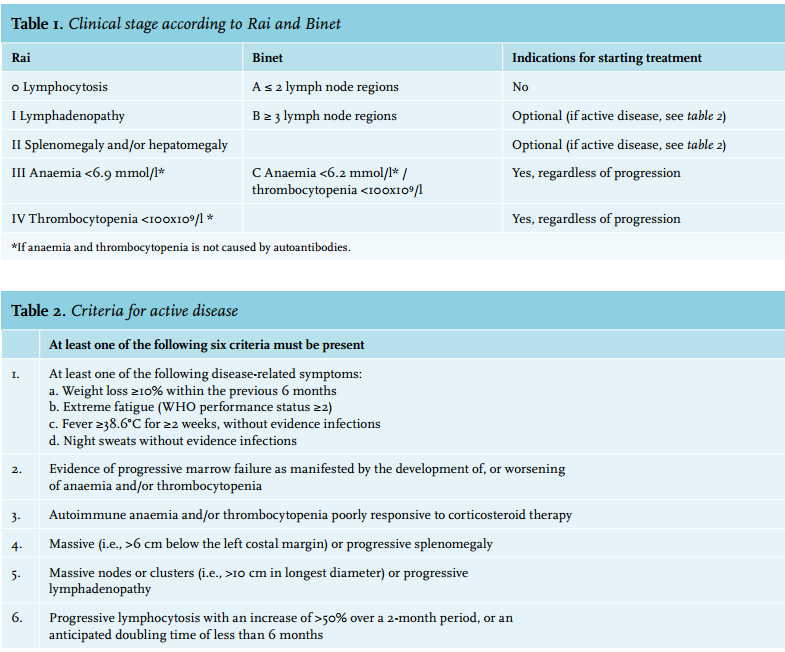 Response evaluation after start of treatment
In daily practice, history, physical examination and blood cell counts are sufficient for the evaluation of response. Bone marrow examination is only indicated to resolve unexplained cytopenia. If there is an indication to follow stricter response criteria (as in studies), imaging (CT neck, thorax and abdomen) and bone marrow examination are generally required. The response can then be classified according to response criteria in complete remission, partial remission or progressive disease (table 3). Moreover, the value of minimal residual disease (MRD) monitoring by either multi-colour flow cytometry or polymerasechain reaction based methods is currently being tested as surrogate endpoint. So far, MRD showed improved correlation with progression-free survival as compared with response rates based on International Workshop on CLL criteria.7 At this moment, MRD guidance should still be considered experimental.8 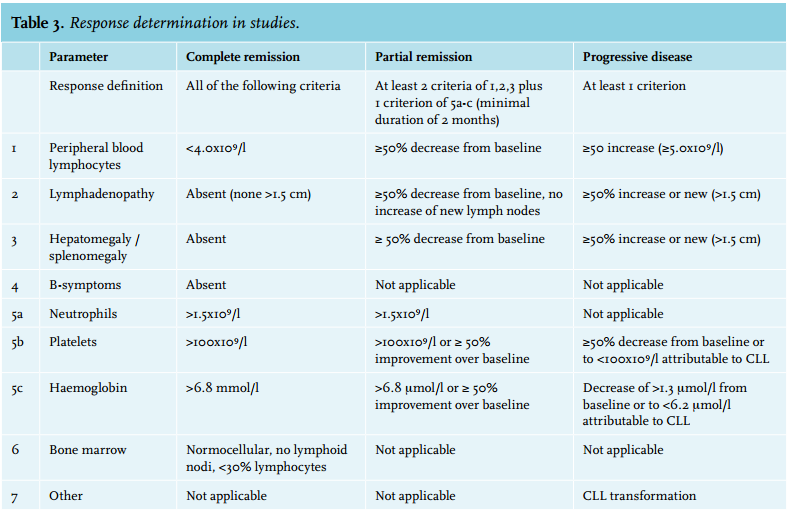 Choice of treatment
It is important to take a number of aspects into consideration when there is a treatment indication. Intensity of treatment should be weighed against age, WHO performance score, comorbidity and toxicity of previous therapy. It can help to classify patients on clinical grounds into three groups: fit (patients without comorbidity), unfit (patients with any comorbidity; WHO 0-2) or frail (patients with severe comorbidities; WHO 3-4). An alternative is to calculate a Cumulative Illness Rating Scale (CIRS) score. (http://farmacologiaclinica.info/scales/ CIRS-G/) A CIRS ≤ 6 is considered fit.9
If, however, the performance score is reduced by disease activity (cytopenia or lymphadenopathy), this is not a reason to refrain from intensive immunochemotherapy.
The risk profile of CLL (especially del(17p) / p53 mutation) and the associated expected response to standard therapy are important factors in guiding treatment choices. The frequency of del(17p) and p53 mutation increases with successive relapses and fluorescence in situ hybridisation (FISH) or p53 mutation analysis at relapse is therefore important. Finally, the choice of treatment can be based on whether the patient prefers decreased toxicity over increased progression-free survival.

Considerations
The purpose of the HOVON CLL working group is to facilitate access to new treatments and to contribute to the development of new treatment options. To make this possible, the aim is to have studies open for both fit and unfit patients with an indication for first-line or relapse treatment, so that many patients can participate. An overview of the studies of the HOVON CLL working group can be found on http://www.hovon.nl/studies/studies-perziektebeeld/cll.html

Front-line treatment in fit patients
• Fludarabine-cyclophosphamide-rituximab (FCR), target six cycles:
Fludarabine 40 mg/m2 orally every four weeks on day 1-3; cyclophosphamide 250 mg/m2 orally every four weeks on day 1-3; first infusion of rituximab at a dose of 375 mg/m2 , then 500 mg/m2 every four weeks
Patients treated with fludarabine should receive prophylaxis for Pneumocystis jiroveci pneumonia and herpes for six months after the last dose. Irradiated blood products should be given until one year after the last dose.

In fit patients, the goal of treatment is to obtain long-term progression-free survival with the improvement of overall survival. In late 2010, the results of a large randomised German study were published, where fludarabinecyclophosphamide (FC) was compared with FCR. FCR was clearly superior with a response rate of 90% (including 44% complete responses), an almost 20-month longer duration of response and improved survival (after 3 years: 87% versus 82%; HR 0.664, p = 0.012).10 FCR is the first treatment that has proven improved survival. This was confirmed in the long-term follow-up of this study with a median follow-up of 5.9 years, with a median overall survival that was not reached for the FCR group and 86 months for the FC group.11 A limitation of the study is that the patients were not representative of the ‘normal’ CLL population: they were fit (CIRS score ≤ 6; creatinine clearance > 70 ml / min) and relatively young. Only 10% were older than 70 years. Nevertheless, FCR is now the standard first-line treatment for fit patients regardless of age. The average response time is almost five years.

In a study with previously treated CLL patients, FCR significantly improved progression-free survival compared with FC, with a median duration of 30.6 months for FCR versus 20.6 months for FC.15 The combination bendamustine and rituximab in relapsed CLL showed a response rate of almost 60%, mostly partial remissions. The median event-free survival was 14.7 months.16 In the Netherlands, bendamustine has not yet received an add-on status for this indication and is therefore not reimbursed.

Treatment at relapse in fit patients with relapse < 2 years after FCR or refractory disease
• R-DHAP, target six cycles (followed by non-myeloablative allogeneic stem cell transplantation):
Dexamethasone 40 mg orally or IV every four weeks on day 1-4, cisplatin 100 mg/m2 IV on day 1, cytarabine 2000 mg/m2 IV every 12 hours on day 2, rituximab: first infusion 375 mg/m2 , then 500 mg/m2.
Antibacterial and antifungal prophylaxis should be administered during R-DHAP. The prescribed medication is according to local policy.

In patients with a relapse < 2 years after FCR or refractory disease, allogeneic stem cell transplantation should be considered.17 Allogeneic stem cell transplantation in patients with refractory and high-risk CLL results in responses to 70% and a five-year survival of about 50%.18,19 A graft versus leukaemia effect may be responsible for this possibly curative response. The non-relapse mortality is approximately 20%, and is mainly caused by infections and graft-versus-host disease. This highly effective treatment is therefore only available to a very limited (fit, relatively young) patient population. The better disease control before transplantation, the greater the chance of a long-term response. In particular, node size is an important predictor of treatment success.
HOVON 88 showed the potency of R-DHAP to achieve clinical responses in these high-risk patients who were consolidated by a non-myeloablative stem cell transplantation.20 It is important to give antibiotic prophylaxis with R-DHAP, because of a high incidence of infectious complications in this study before prophylaxis was advised.
If allogeneic stem cell transplantation is not considered, treatment with the CD52 antibody alemtuzumab is a possibility, especially in disease with little lymphadenopathy. In patients with lymph nodes of > 5 cm less response to alemtuzumab is seen and alternative treatment is warrented.21 It is important to monitor opportunistic infections, particularly cytomegalovirus. Alemtuzumab is no longer registered for CLL, but still available (free of charge) until at least 2017.

If a relapse occurs more than six months after the previous immunochemotherapy and there is no del(17p) / p53 mutation, repeating this treatment can be considered. With a shorter duration of response or del(17p) / p53 mutation, such repetition is not expected to be effective. For unfit patients, bendamustine in combination with rituximab could be considered. Ofatumumab, the fully human monoclonal CD20 antibody, has proven effectiveness not only in patients who are refractory to fludarabine as well as alemtuzumab (OR 58%), but also in patients who are refractory to fludarabine, and have greatly enlarged nodes (OR 47%). The median duration of response in both groups was about six months.22 Based on these findings, ofatumumab has been registered and is reimbursed as an add-on for CLL patients who are refractory to fludarabine and alemtuzumab.

Kinase inhibitors interrupt crucial signalling pathways from the membrane to the cell nucleus. The most effective kinase inhibitors block the B-cell receptor signalling pathway, by inhibiting the kinases Btk (ibrutinib = Imbruvica®) and PI3K-δ (idelalisib, = Zydelig®). These inhibitors can be given orally and in case of idelalisib in combination with rituximab. Two recently published studies, both in high-risk patients, showed impressive response duration.24-26 Rapid relapses occur after treatment cessation, and therefore these drugs should be continued until relapse or progression. These new drugs have specific side effects such as gastrointestinal side effects and skin toxicity with idelalisib27 and thrombocyte aggregation inhibition and atrial fibrillation with ibrutinib. Ibrutinib is therefore used with caution in patients with atrial fibrillation and/or treatment with therapeutic anticoagulation. Only limited bone marrow suppression occurs. A specific phenomenon of treatment with kinase inhibitors is a temporary lymphocytosis in combination with a rapid decrease of lymphadenopathy in the first weeks after initiation of therapy.
Ibrutinib and idelalisib are registered for the treatment of CLL patients after at least one prior therapy, or as front-line therapy in the presence of del(17p) or p53 mutation in patients not eligible for immunochemotherapy. These expensive drugs are reimbursed as add-on.
The average response time is still unclear. After 1.5 years more than half of the patients are still in remission. Given the lack of literature about side effects with prolonged use, and the question whether successful reinduction is possible for patients who progress on a kinase inhibitor, it is advised to treat only those patients with kinase inhibitors that have active disease during or shortly after optimal immuno-chemotherapy.