Answer to Photo Quiz: Not your average filling defect 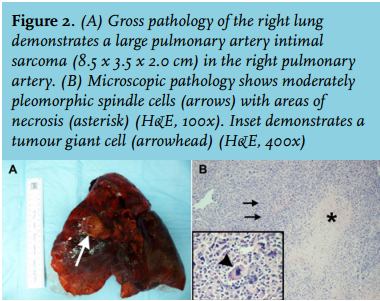 
CTA demonstrated a large filling defect in the right pulmonary artery (RPA) compatible with pulmonary embolism. The patient’s constitutional symptoms raised concern about malignancy as a predisposing factor for venous thromboembolism. 18 Fluorodeoxyglucose positron emission tomography (PET)/CT was performed, which revealed increased uptake (SUVmax 9.3) only in the RPA. This finding was consistent with a neoplasm arising from within the RPA itself.

PAS is extremely rare. Men and women are equally affected and are usually between 45-55 years of age at disease onset. Nonspecific symptoms make delays in diagnosis common. Furthermore, since PAS appears as an intraluminal filling defect on CTA, these cases are often initially misdiagnosed as pulmonary embolism. Often, PAS is considered only when the patient does not respond to anticoagulation or even thrombolytic therapy.1 CT findings suggestive of PAS rather than pulmonary embolism include filling defects occupying the entirety of the main pulmonary artery or its proximal branches and expansion of any segment of the pulmonary artery. Extraluminal extension also suggests PAS. On PET, PAS, unlike pulmonary embolism, will classically demonstrate increased uptake of 18 Fluorodeoxyglucose.2

In addition to the spindle cells and pleomorphic giant cells typical of mesenchymal tumours, a heterogeneous hypercellular pattern intermixed with varying degrees of necrosis and mitotic activity is characteristic of PAS. Immunohistochemical stains are usually positive for desmin, vimentin, cytokeratin, and smooth-muscle specific actin. Overexpression of the MDM2 oncogene, a negative regulator of p53, is a frequent finding.2

Survival in PAS is poor: a mean of 1.5 months in patients treated without surgical intervention. A significant percentage of patients die of right ventricular failure secondary to outflow obstruction.3 Histological subtype may also affect survival. Adjuvant chemotherapy, if tolerated, is considered standard of care and can increase survival to 12-18 months. Treatment regimens are extrapolated from other sarcomas and usually include anthracyclines, ifosfamide, and cisplatin. The role of radiotherapy is currently undefined.4

Our patient’s postoperative course was uncomplicated. He declined adjuvant therapy. At three-month follow-up, he had no evidence of recurrent disease.

No conflicts of interest for all authors.