Patients
Medical records of all outpatient clinic patients with type 1 or type 2 diabetes presenting for routine care at our tertiary centre were reviewed. Patients who had a mean HbA1c ≥86 mmol/mol (≥ 10%) (poor-control group) and those with a mean HbA1c ≤ 53 mmol/mol (≤ 7%) (optimal-control group) for two consecutive years were invited to participate in the study. Women who were pregnant or were planning to become pregnant and persons who had undergone organ transplantation were excluded.

Measurements
Clinical characteristics were collected from the medical records and concerned type of diabetes, age, age at onset of diabetes, gender, body mass index (BMI), HbA1c, diabetesrelated complications, and number of outpatient visits. Psychological characteristics, frequency of hypoglycaemic episodes and self-management behaviour were assessed cross-sectionally, using questionnaires. Self-management behaviour was assessed using questions about physical exercise, and self-monitoring of blood glucose (SMBG). Questionnaires were sent after informed consent had been obtained.
General psychological problems were assessed by a questionnaire asking about lifetime depression, anxiety, and eating disorders (PreDis-Diab questionnaire). Lifetime psychological problems were measured because of the assumption that especially people more prone to suffer from psychological problems would also be more prone to neglect self-management.
Diabetes-related distress was measured using the Problem Areas in Diabetes (PAID) scale,15 the Hypoglycaemic Fear Survey (HFS)16 and the Diabetes Fear of Injecting and Self-testing Questionnaire (D-FISQ).17 The PAID scale consists of 20 items concerning negative emotions related to diabetes. The cut-off score for serious emotional distress is 40, average reported scores are 24.6±18.7 for type 1 diabetes and 22.5±19.8 for type 2 diabetes.15 The Hypoglycaemic Fear Survey Worries Subscale consists of 13 items, with a cut-off score of 20. The behaviour subscale is not validated and not used. The Diabetes Fear of Injecting and Self-Testing questionnaire, subscale fear of injecting, consists of six items with a cut-off score of 4. The subscale fear of self-testing consists of 9 items with a cut-off score of 6 to indicate anxiety.8
All patients received a reminder after six weeks, non-responders were reminded by their own physician.

Of all 199 persons fulfilling the inclusion criteria (figure 1), nine had died, two had emigrated, 16 women were pregnant or were planning to become pregnant and 13 were excluded because they had undergone organ transplantation. Five people were excluded due to incomplete clinical data, 14 could not complete the questionnaires due to severe comorbidity. In the poor-control group, 32 (20 DM1, 12 DM2) of 61 eligible patients returned questionnaires, in the optimal-control group this was 53 (37 DM1, 16 DM2) of 79, a response rate of 52% and 67% respectively (non-significant). Clinical characteristics of responders and non-responders did not differ from those of all eligible persons. Mean HbA1c was 97±9 (11±1%) for the poor-control group and 48±7 (7±1%) for the optimal-control group.
Clinical characteristics between the two groups did not differ, except that those in the poor-control group had a higher BMI and were more often using a combination of oral and insulin medication (29 ± 8 vs. 25 ± 5, p = 0.00 and 28 vs. 4%, p = 0.02 respectively).
Daily SMBG use and physical exercise were significantly higher in the optimal-control group (38 vs. 74%, p = 0.03 and 50 vs. 68%, p = 0.05 respectively). The poor-control group visited the clinic more frequently (25 vs. 4% more than four times a year, p = 0.01).
Scores regarding general psychological problems as well as diabetes-related distress were similar in the two groups. Only the proportion of patients reporting lifetime anxiety was higher in the poor-control group (34 vs. 9%, p=.01). The anxiety episode dated back more than ten years in all subjects in this study. All results are displayed in table 1.
To detect potential differences between and within type 1 and type 2 diabetes, we performed post-hoc subgroup analyses. Lifetime depression, anxiety, and eating disorders all seemed most prevalent in the diabetes type 2 poor-control subgroup as compared with the other subgroups. The diabetes type 2 poor glycaemiccontrol subgroup also tended to report more diabetesrelated emotional distress and more fear of hypoglycaemia compared with persons with type 2 diabetes in optimal glycaemic control. The reverse was observed in the type 1 subgroups, where those with diabetes type 1 in the poor-control group tended to report less emotional distress and less fear of hypoglycaemia as compared with those with diabetes type 1 in the optimal glycaemic-control group. However, due to the low numbers, none of these differences attained statistical significance (data not shown). 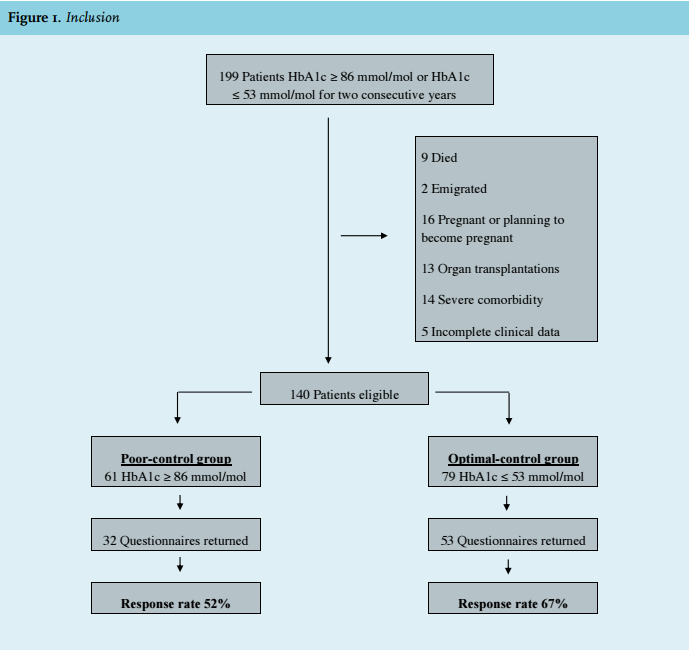 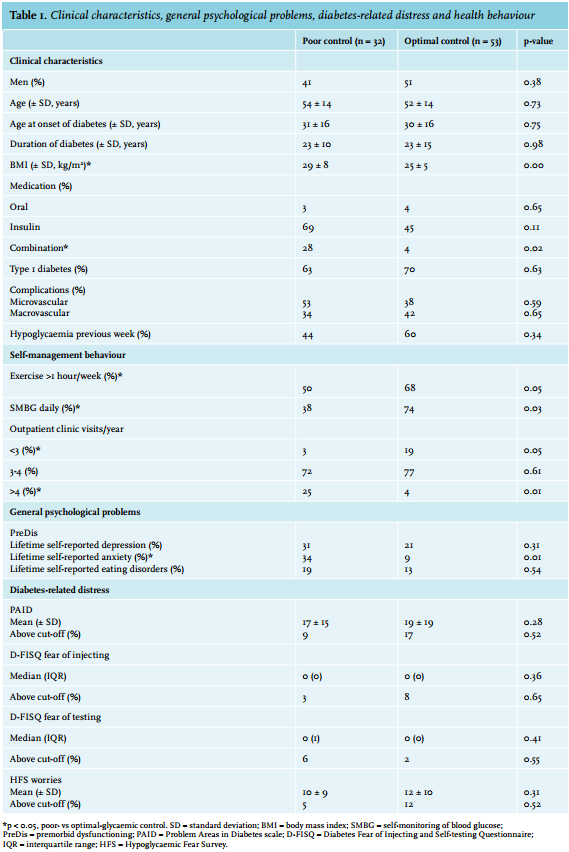 The main finding of our study is that persons with diabetes and persistently poor glycaemic control have surprisingly few lifetime psychological problems and diabetes-related distress. In contrast to common belief and to our own expectations, it seems that these people with diabetes do not see persistent poor glycaemic control as a problem. Neither did we find any evidence that poor glycaemic control is a consequence of psychological distress. Except for a significantly higher prevalence of lifetime anxiety, none of the other psychological variables were significantly different between the groups. While the poor-control group had numerically a slightly lower response rate, the overall response rate was relatively high, above 50% in both groups, and not significantly different between the two groups.
We expected patients with poorly controlled diabetes to experience more general psychological problems, and more diabetes-related distress, being associated with a deterioration in glycaemic control. Our study shows that this is not the case. In the literature to date, no explanation for our findings can be found. Former studies predominantly show that depression and non-adherence are associated,3 and that patients who are depressed and distressed by their diabetes are in significantly poorer glycaemic control relative to those not depressed nor distressed.7 However, de Vries et al. stated earlier that psychological mechanisms in diabetes may be complicated.1
Some potential mechanisms may explain our findings. Persons in the poor-control group may try to avoid hypoglycaemias by keeping their blood glucose levels high, in this way diminishing their fear of hypoglycaemia.
Furthermore, as a consequence of keeping blood glucose levels high, diabetes care may need less attention in daily life and therefore may lead to less diabetes-related emotional distress than was expected. On the other hand, optimal control needs effort and attention which in turn may increase diabetes-related distress and fear of hypoglycaemia. Our post-hoc analyses suggest that this may only be the case in diabetes type 1. In diabetes type 2 poor glycaemic control seems to be associated with higher diabetes-related emotional distress and increased fear of hypoglycaemia. While our study group was too small to compute statistically significant differences, it might be hypothesised that optimal glycaemic control and low diabetes-related emotional distress are incompatible in diabetes type 1, whereas in type 2 diabetes the inverse may exist. This may explain why interventions predominantly fail to improve glycaemic control, diabetes-related distress and depression simultaneously.12-14 It also stresses the need to distinguish type 1 and type 2 diabetes concerning the psychological processes involved.
In our study, we found that the proportion of patients reporting lifetime anxiety was higher in the poor-control group. Post-hoc analyses suggest that lifetime depression, lifetime anxiety, and lifetime eating disorders are all most prevalent in the diabetes type 2 poor-control group. For type 1 diabetes, general psychological problems may more often be a consequence of having diabetes, being prevalent in the same proportions in the poor as well as in the optimal glycaemic-control group, except for lifetime anxiety, which was hardly prevalent in the diabetes type 1 optimal-control group. For type 2 diabetes psychological problems may be a preceding factor, which has been suggested before.8,18-20
These psychological problems may result in obesity, and may interfere with reaching optimal glycaemic control.
The response rate of our study is relatively high, but we cannot exclude the possibility that patients with more severe psychological problems were less likely to respond. However, clinical characteristics of the responders being similar to those of all eligible patients argues against this possibility. The fact that this study concerned tertiary care patients as well as our small sample sizes may limit the generalisability of our results.
To study psychological processes in diabetes it is essential that several general and diabetes-specific psychological variables are studied simultaneously in relation to diabetes self-management and glycaemic control, for type 1 and type 2 diabetes separately. Only in this way is it possible to disentangle the psychological processes involved.

In conclusion, except for a higher prevalence of self-reported previous anxiety episodes, patients with persistent poor glycaemic control do not differ in any of the general or diabetes-related psychological characteristics from patients in the optimal-control group. These patients do not seem to consider poor glycaemic control to be a problem.

The authors have no competing interests to report.