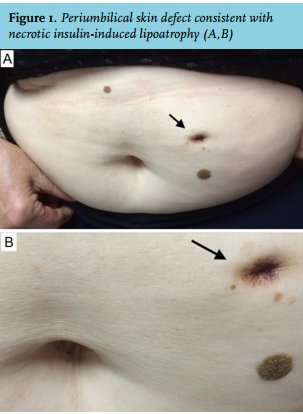 A 65-year-old female was diagnosed with type 2 diabetes mellitus two years earlier, after she had suffered an ischaemic stroke. Her post-stroke disability resolved completely. She was prescribed metformin and premixed insulin analogue (aspart + aspart-protamine) twice daily after clear instructions were given. The patient’s general practitioner continued medical care and scheduled her control visits. The patient was adherent to the insulin therapy, but did not reach target glucose levels despite the use of 90 units daily. The general practitioner made a telephone consultation with our centre and confirmed that the patient did not have any technical complaints regarding the insulin therapy. We instructed the general practitioner to switch to a thrice daily premixed insulin analogue regimen and to increase the dose to 125 units daily. Nevertheless, her glycated haemoglobin level remained above 9.5%. The patient was finally referred to our centre and was asked to demonstrate her insulin injection technique. The patient confirmed that she had been injecting insulin consistently in the same area over the two-year period. A painless, necrotic skin lesion with no signs of acute inflammation was found at the injection site in the periumbilical abdominal wall (figure 1A and B).


What is your diagnosis?