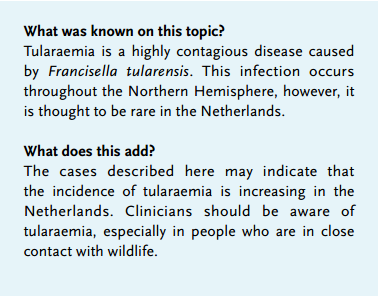 A 34-year-old man presented to the emergency room with malaise and swelling of the distal phalanx of the second finger of his left hand, four days after an accidental injury from a sharp bone when dressing a hare (Lepus europaeus). This hare was found dead in the field by his father and brought home to feed to the patient’s ferrets. On physical examination, his temperature was 39.4°C. A tender and enlarged lymph node was noticed in his left axilla. The X-ray taken of his finger revealed no remaining hare bone. The consulted surgeon prescribed amoxicillin/clavulanic acid 500/125 mg three times a day for a suspected wound infection. Three days later the patient returned because three pustules had developed on his finger. These pustules were incised and drained. A coagulase negative staphylococcus was cultured from the collected pus. Four weeks later, the patient again presented to the emergency department because of fever, malaise and headache. The index finger of his left hand was lightly swollen but neither warm nor red; no pus was seen. The patient himself wondered whether his complaints could be caused by tularaemia. He considered this diagnosis based on information he found about tularaemia on a hunters website2 and because his father had similar symptoms.
His father had visited his general practitioner with malaise, nausea, vomiting, headache and fever. Ten days after handling the hare, he had developed sores on both hands. On clinical examination he had multiple small sores on his hands, enlarged lymph nodes in elbows and axillae but no fever. The malaise persisted for weeks.
For both the patient and his father, high titres of antibodies strongly suggestive of tularaemia were detected using a micro-agglutination test (BD Difco 241050™ BBL™, Breda, the Netherlands). No cross-reacting Brucella antibodies were found. Fluoroquinolones, such as ciprofloxacin, and tetracyclines, such as doxycycline, are regarded as the first-line oral treatment.3 Both men were treated with doxycycline 100 mg twice daily for 14 days, after which their symptoms resolved. However, the lymphadenopathy on the father’s elbow persisted for weeks; five months after finding the hare, a persistent suppurative lymph node in his right axilla was drained.
In addition, the patient reported that his dog had been suffering from lethargy and loss of appetite for about a week, after licking the hare’s carcass. In the two ferrets that were fed meat of the hare, no clinical signs were observed. Blood samples from the dog and the ferrets were collected for serology. Because of haemolysis, interpretation of the agglutination test was not possible. All three sera tested positive in the Virapid® Tularaemia test (Virapid®, Vircell S.L., Santa Fé, Spain). These positive results should be interpreted with caution, since this test is validated in human sera only and false-positive results because of cross-reacting antibodies cannot be excluded.4 However, the dog’s clinical symptoms, in combination with a positive test, suggest exposure to F. tularensis.

F. tularensis can be transmitted to humans by various routes, including handling of infected animals, ingestion of contaminated food or water, inhalation of infective aerosols, and arthropod bites.1 Both patients developed ulcero-glandular tularaemia after handling a dead hare, suggesting the hare served as the source of infection.
However, the hare was no longer on hand for confirmatory testing. Dogs and ferrets are thought to be less susceptible to tularaemia and only a few cases of tularaemia have been reported in dogs.5-7 In the Netherlands F. tularensis infected dogs have not been described before. It is not known whether dogs can transmit the disease to humans, although in a patient suffering from endocarditis caused by F. tularensis, transmission from a dog was suggested.8
Between October 2011 and January 2015, three other cases of tularaemia were reported in humans, and three out of 117 hares tested positive for tularaemia, either in the context of finding the source of a human infection or non-targeted wildlife disease surveillance in the Netherlands.9-11 The number of reported tularaemia cases in Dutch hares seems to be in agreement with data from neighbouring countries.9 However, making comparisons is difficult, because there is no standardised monitoring system among European countries.12 Although tularaemia has long been considered to be rare in the Netherlands, these cases may indicate that the incidence is increasing. Clinicians should be aware of tularaemia, especially in people who are in close contact with wildlife.

The authors acknowledge Mauro de Rosa and Marcel Spierenburg from the Netherlands Food and Consumer Product Safety Authority (NVWA) for providing the samples from the dog and ferrets.