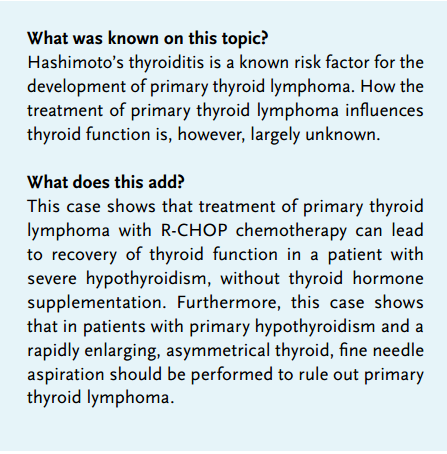 An otherwise healthy 63-year-old women presented to the outpatient clinic with complaints of a left-sided enlargement of the neck. She had noticed the painless swelling two months before and reported that it had not grown since. There were no B-symptoms and no symptoms of thyroid dysfunction. Physical examination showed a large (approximately 7 cm) palpable mass on the left side of the neck and an enlarged thyroid. There was additional lymphadenopathy, hepatosplenomegaly and no signs of thyroid disease. Laboratory studies showed a slightly elevated sedimentation rate (33 mm/h, normal < 30 mm/h) and severe primary hypothyroidism with an undetectable fT4 level (< 4.5 pmol/l, normal 10.0-24.0 pmol/l) and an elevated thyroid-stimulating hormone level (65 mU/l, normal 0.400-4.00 mU/l). The patient tested positive for anti-TPO-antibodies (379 mU/l, normal < 60 mU/l). All other laboratory measurements, including haemoglobin, lactate dehydrogenase levels and serum protein electrophoresis, were normal (haemoglobin: 8.9 mmol/l, normal 7.2-9.5 mmol/l; lactate dehydrogenase: 237 U/l, normal < 248 U/l). A computed tomography (CT) scan showed extensive bilateral lymphadenopathy of the neck and an asymmetrical enlarged thyroid. PET-CT yielded no evidence of extranodal localisations. A biopsy of a lymph node was taken and showed a diffuse large B-cell lymphoma (DLBCL) (figure 1). Bone marrow aspiration revealed no localisation. The patient was diagnosed with stage IIE DLBCL of the thyroid with severe hypothyroidism because of autoimmune thyroiditis. The age-adjusted International Prognostic Index score was 0 (low risk). Treatment was started with six courses of R-CHOP chemotherapy, consisting of rituximab 375 mg/ m2 , cyclophosphamide 750 mg/m2 , doxorubicin 50 mg/m2 , vincristine 1.4 mg/m2 (with a maximum of 2 mg) on day 1 and prednisone 100 mg on day 1 to 5. Because of the lack of symptoms and a possible effect of R-CHOP treatment on thyroid function, no levothyroxine supplementation was started. Thyroid function indeed improved quickly after the start of chemotherapy (figure 2), and only mild subclinical hypothyroidism persisted after six courses of R-CHOP. Anti-TPO antibodies were undetectable and imaging studies, including PET-CT, showed complete remission. 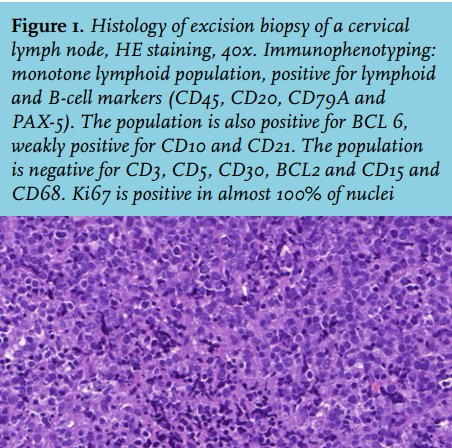 Primary thyroid lymphoma is a rare disease, as it accounts for only about 2% of extranodal lymphomas and less than 5% of primary thyroid malignancies. There is a female predominance, with a peak age incidence in the sixth or seventh decade of life. A rapid enlarging goitre is the major presenting symptom. B-symptoms, such as fever, night sweats and weight loss, occur in approximately 10% of patients. Primary thyroid lymphoma is almost always of the malignant B-cell lymphoma type. The most common subtypes are DLBCL and mucosa-associated lymphoid tissue (MALT) lymphoma. A known risk factor for primary thyroid lymphoma is pre-existing chronic autoimmune thyroiditis (Hashimoto’s thyroiditis), which is found in 60-90% of patients. Patients with primary thyroid lymphoma are often euthyroid or already being treated for Hashimoto’s thyroiditis, but hypothyroidism can be present.1,2
In Hashimoto’s thyroiditis, autoimmune-mediated destruction of the thyroid gland leads to gradual thyroid failure. It is characterised by diffuse infiltration of the thyroid with B and T lymphocytes. The T cells are, however, thought to play a dominant role in the pathogenesis of Hashimoto’s thyroiditis. Dysfunction of suppressor T cells is thought to lead to overgrowth of Th1 cells, which leads to cytokine production. Cytokines activate cytotoxic T cells, which in turn cause apoptosis of epithelial thyroid cells. Cytokines also stimulate B cells in the thyroid to produce antithyroid antibodies. Nearly all patients with Hashimoto’s thyroiditis display antibodies to thyroid peroxidase (TPO) and thyroglobulin. These antibodies, however, are thought to arise as a result of thyroid tissue damage and are thus considered markers of the underlying autoimmune process. The antibodies are polyclonal and are unable to induce disease when transferred to animal models, thus anti-TPO antibodies are probably of limited biological significance.3-5 On the other hand, in animal models where spontaneous autoimmune thyroiditis is induced, it has been shown that although T cells are the main effector cells involved in the pathogenesis, B-cell-depleted mice cannot develop autoimmune thyroiditis, suggesting a crucial role for B cells as well.6
The reason why patients with Hashimoto’s thyroiditis develop malignant lymphoma is not fully understood but it has been hypothesised that chronic antigenic stimulation of lymphocytes in the thyroid in these patients may lead to malignant transformation.
We present a case of severe primary hypothyroidism in a patient with primary thyroid lymphoma, with almost complete recovery of thyroid function after R-CHOP chemotherapy, without levothyroxine supplementation. Since previous thyroid function tests were unavailable and the patient did not experience symptoms associated with thyroid dysfunction, it is unknown for how long the Hashimoto’s thyroiditis was present in our patient. More important, the exact mechanism of the recovery of thyroid function after chemotherapy without supplementation of thyroid hormone remains to be elucidated. Since rituximab is used for the treatment of various autoimmune diseases, a specific effect of rituximab on thyroid function in this case might be implied. Little is known about the effect of rituximab on thyroid function in patients with Hashimoto’s thyroiditis, with or without thyroid lymphoma. In anti-TPO positive, euthyroid patients treated with rituximab for rheumatological disorders, no effect was seen on anti-TPO antibody levels or levels of TSH and fT4.7 A case series of three patients treated with R-CHOP or rituximab monotherapy for thyroid MALT lymphoma did show a decrease of anti-TPO antibody levels, with a concomitant decrease in thyroid-stimulating hormone levels, albeit within the normal range.8 Raterman et al., on the other hand, reported a case of a patient with Hashimoto’s thyroiditis, treated with rituximab because of rheumatoid arthritis, who developed hyperthyroidism under a stable dose of levothyroxine, accompanied by a decrease in anti-TPO antibody levels. The authors suggested that B-cell depletion due to rituximab may have led to a decrease in anti-TPO production with a direct effect on thyroid function.9 However, since anti-TPO antibodies are probably not a direct cause of hypothyroidism, as discussed previously, this seems unlikely. Apart from B-cell depletion caused by rituximab, a direct effect of chemotherapy on infiltration of the thyroid by the lymphoma may have influenced thyroid function in our patient. Also, T-cell depletion caused by the chemotherapy (cyclophosphamide, prednisone) or even by rituximab,10 may have played a role. 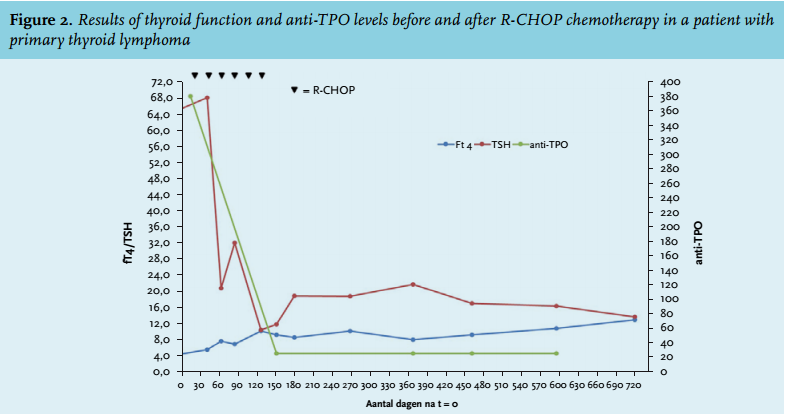 In conclusion, we present a case of severe primary hypothyroidism in a patient with primary thyroid lymphoma, with almost complete recovery of thyroid function after R-CHOP chemotherapy. The exact mechanism by which R-CHOP chemotherapy led to the spectacular improvement in thyroid function remains to be elucidated. Furthermore, this case shows that in patients with primary hypothyroidism and a rapidly enlarging, asymmetrical thyroid, fine needle aspiration should be performed to rule out primary thyroid lymphoma.