Suspected leptospiral meningitis in adults: report of four cases and review of the literature

Leptospirosis (infection with Leptospira spp) is a widespread zoonotic disease. Although the majority of the case load is seen in tropical areas,1,2 it also occurs in Europe with a reported incidence of 0.13 per 100,000 individuals.3 Leptospirosis is caused by the transmission of a spirochete of the Leptospira genus through direct contact with infected animals or through indirect contact with a contaminated environment, e.g. fresh water.4 A wide variety of mammalian hosts, both feral and domestic/ semi-domestic, serve as infection reservoirs and can excrete Leptospira spp in the urine.4
Leptospira infection may cause a variety of clinical syndromes. The most severe form is Weil’s disease, which has a high mortality and is characterised by high fever, bleeding, icterus and renal insufficiency.2,5 Leptospiral infection may also present with neurological symptoms, such as meningitis, bilateral facial palsy or opsoclonusmyoclonus syndrome.4,6-8 Many patients with leptospiral infection present with headache, fever and neck stiffness and therefore bacterial, tuberculous or viral meningitis may often be suspected prior to the eventual diagnosis of leptospirosis.9-11 Symptoms of meningitis due to leptospirosis occur with and without cerebrospinal fluid (CSF) abnormalities.12
In the Netherlands, approximately 30-40 cases of leptospirosis are reported per year.11 We reviewed the cases of leptospirosis with suspected meningitis identified in a tertiary referral hospital in the Netherlands and performed a review of the literature on leptospiral meningitis.

We identified all adult patients (≥ 16 years of age) with confirmed leptospirosis in the Netherlands between January 2011 and December 2014. Cases were defined as patients with a positive serology (microscopic agglutination test (MAT), enzyme-linked immunosorbent assay (ELISA)), positive polymerase chain reaction (PCR) and/or a positive culture for Leptospira species. These tests were performed by the World Health Organisation, Food and Agriculture Organisation of the United Nations, World Organisation for Animal Health, and the National Collaborating Centre for Reference and Research on Leptospirosis (NRL) at KIT Biomedical Research, the Royal Tropical Institute in the Netherlands. NRL confirms approximately 99% of the suspected cases of leptospirosis in the Netherlands, and thus could provide the authors with nationwide epidemiological data for this article.
From this dataset we selected patients with leptospirosis admitted at the Academic Medical Centre, Amsterdam, a tertiary referral hospital in the Netherlands, to study clinical characteristics, treatment and outcome. We analysed whether symptoms consistent with bacterial meningitis (neck stiffness, fever and headache) were associated with CSF abnormalities. All patients with abnormal CSF (defined as CSF white blood cell count > 5/ mm3 , total protein > 0.6 g/l or CSF to blood glucose ratio < 0.6) were considered to have leptospiral meningitis.13 We retrospectively collected clinical characteristics, data on ancillary investigations and outcome. The data were processed anonymously. Oral and written informed consent was obtained from all patients with leptospiral meningitis.


REVIEW OF THE LITERATURE

Subsequently, we performed a literature search for leptospiral meningitis on PubMed, using the search terms “leptospir* AND meningitis”, and ““Neurologic Manifestations”[MeSH] AND leptospir*”. We also searched for cohort studies and reviews about leptospirosis using the search term “leptospir*”. The search was updated until 20 March 2015.
Articles reporting children or animals, duplicate articles and articles in which no specific data were given for leptospiral meningitis patients were excluded. Leptospiral meningeal involvement was defined as a combination of 1) fever with one of the following signs: neck stiffness, altered consciousness or other meningeal signs,12 and 2) detection of Leptospira species in blood and/or CSF by PCR or culture, and/or detection of leptospiral antibodies by serology (MAT and/or ELISA). When CSF was abnormal (see Methods section), the diagnosis of meningitis was established. In an analysis of clinical data we systematically scored baseline and presenting characteristics, clinical course and outcome.
Differences between groups were calculated by means of Fisher’s exact test. Articles with neither an abstract nor access to the full text were excluded. Studies written in English, German, French, Dutch, Spanish, Italian and Portuguese were included. 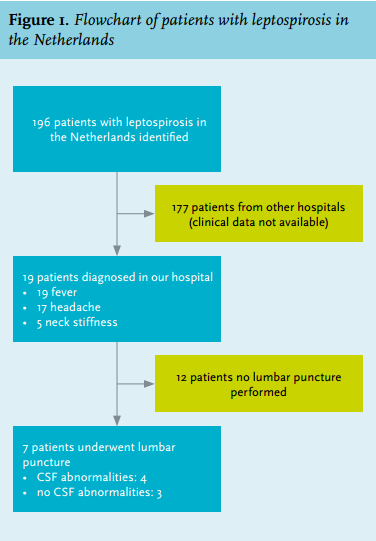 In our hospital, 19 adult cases of leptospirosis (10%) were identified based on a positive serology and/or PCR and/or culture. All 19 patients presented with fever, 17 (89%) presented with headache and five (26%) with neck stiffness. The median age was 27 years (range 17-61 years) and 15 patients were male (79%). Eighteen patients contracted leptospirosis abroad (95%) and one patient contracted leptospirosis in the Netherlands (5%).
In seven patients (37%) there was a clinical suspicion of meningitis, for which a lumbar puncture was performed. Four patients with CSF abnormalities were diagnosed with leptospiral meningitis. Three patients had no CSF abnormalities (figure 1), of which one patient had not been abroad and had not been in contact with animals. The incidence of meningitis in leptospirosis in our hospital was 21% (4 out of 19 patients). The patients with leptospiral meningitis are described below.

Case 1
A 27-year-old Dutch patient was admitted to the hospital in Laos with fever, myalgia, shivers and vomiting. He had been travelling through Vietnam, Laos, Cambodia and Thailand, where he had been swimming. He was treated with antibiotics but no source of infection was found. When he returned to the Netherlands a few days later, he presented with recurrent fever (temperature 38.5°C) and progressive headache. Physical examination showed conjunctivitis and neck stiffness. Laboratory examinations showed the following: creatinine 62 µmol/l, leukocytes 6.4 x 109/l, C-reactive protein (CRP) 3.6 mg/l, serum glutamic oxaloacetic transaminase (SGOT) 23 U/l, serum glutamic pyruvic transaminase (SGPT) 15 U/l, and bilirubin 5 µmol/l. Lumbar puncture showed turbid CSF with 734 leukocytes/ mm3 (75% polymorphonuclear leukocytes), protein level of 0.63 g/l, and CSF to blood glucose ratio of 0.45. The IgM ELISA for leptospirosis was positive. The patient was treated with 1 million IU penicillin intravenously four times a day for seven days. He was discharged in a good clinical condition without sequelae.

Case 2
A 45-year-old Dutch patient presented with fever, headache, nausea and diarrhoea. He had been travelling through Singapore, Thailand and Indonesia two weeks prior to admission, where he had suffered from gastroenteritis after he fell off a boat during rafting and ingested fresh water. Physical examination showed bilateral conjunctivitis but no other abnormalities. Laboratory examination showed the following: erythrocyte sedimentation rate (ESR) 101 mm/h, CRP 106 mg/l, leukocytes 10.8 x 109/l, creatinine 413 µmol/l, SGPT 36 U/l, and bilirubin 8 µmol/l. The Leptospira IgM lateral flow test was positive and patient was treated with oral amoxicillin and discharged. However, the next day, he presented again with aggravated headache. Neurological examination now showed neck stiffness, for which a lumbar puncture was performed. This showed turbid CSF containing 628 leukocytes/mm3 (86% polymorphonuclear leukocytes), protein level of 0.92 g/l and a CSF to blood glucose ratio of 0.41. The IgM ELISA and MAT were both positive, the probable infecting serogroup was Grippotyphosa. The patient was treated with 12 million IU penicillin intravenously daily for three days followed by oral amoxicillin (750 mg three times daily) for one week. He was discharged in a good clinical condition without sequelae.

Case 4
A 22-year-old Dutch patient presented with fever, headache, cough and nausea. The symptoms appeared a week after returning from a backpack trip in Malaysia, Borneo and Thailand for two months. She had not swum in fresh water, but had slept in rice fields in Thailand. Physical examination showed a temperature of 40.5°C and neck stiffness. Laboratory examination showed the following: leukocytes 12.9 x 109/l, CRP 62.3 mg/l, creatinine 93 µmol/l, SGOT 58 U/l, SGPT 18 U/l, and bilirubin 8 µmol/l. Lumbar puncture showed clear CSF with 11 leukocytes/ mm3 (100% mononuclear cells), a protein level of 0.21 g/l and a CSF to blood glucose ratio of 0.60. The MAT, IgM ELISA and PCR for leptospirosis were positive and showed Leptospira serogroup Mini. Patient was treated with 100 mg doxycycline twice daily for seven days. She was discharged in a good clinical condition without sequelae.

Review of the literature for leptospiral meningitis
A total of 41 relevant articles published between 1947 and 2014 were identified, describing 366 adults with leptospiral meningitis (figure 2).9,12,14-52 The number of included patients per study varied between one and 162 patients. Studies were performed in Europe (25), Asia (9) and America (7) (figure 2).
The median age of the patients was 33 years (range 17-77 years) and 51 of 62 (82%, 95% CI 72-92%) were male (table 1). Two out of 26 (8%) patients were immunocompromised (95% CI 0-16%). A known aetiology was reported in 32 of 33 patients (97%, 95% CI 91-100%); seven had been in contact with fresh water (five swimming, one fishing, and one window cleaning in an endemic area), six worked with cattle, five had been in contact with dogs, five had been in contact with rats, four were farm workers, two lived in a rural area endemic for leptospirosis, one worked in sewers, one was a horse trainer and one was a hunter. In one patient, no aetiology was found. In an article describing 162 patients with leptospiral meningitis, no aetiology per patient was reported, but the patient group mainly consisted of farmers.47
Headache was reported in 65 of 69 patients (94%, 95% CI 88-100%). Fever was reported in 100 of 102 patients (98%, 95% CI 93-100%), neck stiffness in 77 of 83 (93%, 95% CI 87-99%) and altered consciousness in 8 of 54 patients (15%, 95% CI 5-25%). The classic triad of fever, altered consciousness and neck stiffness53 was present in 5 of 39 patients (13%, 95% CI 3-23%).
The median CSF leukocyte count was 206 leukocytes/mm3 (range 6-2072). All but one of the patients in whom the CSF leukocyte counts were known had a leukocyte count under 2000, with a predominance of lymphocytes (95%, 95% CI 92-98%) in most patients (224 of 236; 95%, 95% CI 92-98%). The CSF protein was known in 39 patients and the CSF glucose in 27 patients. The median CSF glucose was 2.5 mmol/l, while the median CSF protein was 1.10 g/l. In 190 of 208 patients (91%, 95% CI 87-95%), CSF protein was normal, and CSF glucose was normal in 201 of 207 patients (97%, 95% CI 95-99%), while CSF leukocytes were elevated (> 5/mm3 ). In all patients, antibodies to Leptospira were detected by blood serology (either ELISA or MAT); no Leptospira were detected in CSF by culture or PCR.
A total of 245 patients (91%) were treated with antibiotics (mostly penicillin and doxycycline). Twenty-three patients were not treated with antibiotics. One patient was treated with dexamethasone and received antibiotics (penicillin) as well.48 Eight of 229 patients (3%, 95% CI 1-5%) died during hospital admission, of which five had received antibiotics. The cause of death was reported in two cases and consisted of respiratory insufficiency46 and gastrointestinal bleeding.27 The mortality rate in patients who were not treated with antibiotics was 13% compared with 2% in patients treated with antibiotics (Fisher’s exact test, p = 0.04).
Three of 56 patients (5%) had sequelae; one patient was not able to walk until two months after discharge,48 one patient had transient renal insufficiency38 and one patient had neurocognitive defects which resolved after a few weeks.22 Two articles describing two case reports of patients with meningeal symptoms but normal CSF were identified.25,54 When combining these patients and our three patients with meningeal symptoms without CSF abnormalities, we identified five male patients with a median age of 27 years (range 20-47). Two had had animal contact, two travelled to a tropical area and one (one of our patients) worked in the municipal cleansing department. All five presented with headache and fever and two with neck stiffness. Diagnosis was established by blood tests; no leptospiral antibodies or DNA were detected in the CSF. All recovered without neurological sequelae. 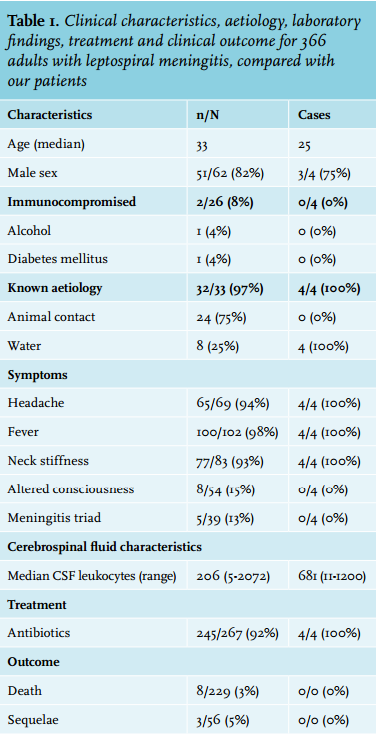 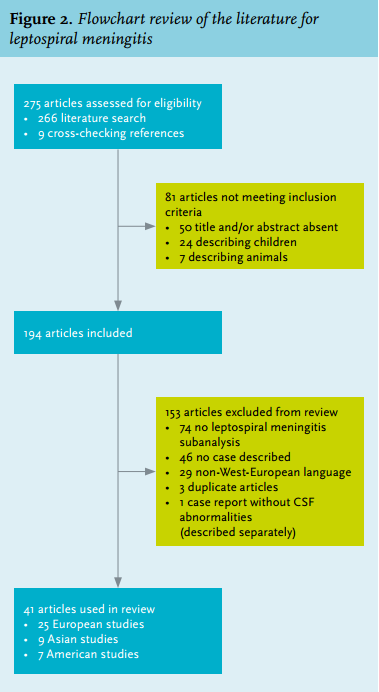 In conclusion, leptospirosis in the Netherlands had an annual incidence of 0.30 per 100,000 inhabitants in the period 2011-2014 and was contracted abroad in 53% of the cases. In the case of suspected meningitis and a history of travel to tropical areas or direct/indirect contact with animal urine, tests for leptospirosis should be considered. Leptospirosis commonly presents with headache and fever, but only a proportion of patients have meningitis. Approximately 50% of patients with suspected leptospiral meningitis have CSF pleocytosis and most have a normal CSF glucose and protein. When the diagnosis of leptospiral infection has been confirmed, lumbar puncture does not have clinical consequences, unless there is a differential diagnosis that needs to be considered. Treatment with penicillin or doxycycline usually leads to a favourable outcome.

The authors thank Hans van der Linden of the Royal Tropical Institute for providing the epidemiological data on leptospirosis in the cases suspected of leptospiral meningitis.