For a long time stress-induced hyperglycaemia was seen as a protective response during critical illness,1 which was thus largely left untreated. Three single-centre randomised controlled trials showed benefit of a strategy aiming for age-adjusted normoglycaemia with intravenous insulin.2-4 Consequently, strict blood glucose control (tight glycaemic control) was implemented in many,5,6 but not all intensive care units (ICUs),7 worldwide. Lack of evidence for the benefit of tight glycaemic control in successive multicentre randomised controlled trials8-12 abated enthusiasm for this strategy. This includes the large Normoglycaemia in Intensive Care Evaluation and Survival Using Glucose Algorithm Regulation (NICE-SUGAR) trial13 which even suggested harm from tight glycaemic control. Also the finding that even mild hypoglycaemia is associated with a worse outcome of critically ill patients14-16 changed the opinion about tight glycaemic control, as hypoglycaemia is a frequent side effect of this strategy.2-4,8-13 Not surprisingly, major international guidelines for the management of critically ill patients changed their recommendations for blood glucose control.17,18
It is uncertain how and when ICUs in the Netherlands responded to the results from the NICE-SUGAR trial13 and the recently changed recommendations regarding blood glucose management in the Surviving Sepsis Campaign (SSC) guidelines of 2012.17 It is even more uncertain whether eventual changes in local guidelines for blood glucose control truly affected the practice of blood glucose management. Therefore, we studied ICUs in the Netherlands for changes in their guidelines for and practice of blood glucose management, from the year before publication of the NICE-SUGAR trial until the year after publication of the latest version of the SSC guidelines. We hypothesised that both publications resulted in new, higher target ranges for blood glucose control in ICUs in the Netherlands.


Settings and participants
All ICUs that provide blood glucose datasets for central registration in the National Intensive Care Evaluation registry were invited to participate in the survey. For the calculation of metrics for blood glucose control we included all blood glucose data from patients admitted to the participating units. We only included critically ill adult patients. We excluded ICUs that did not respond precisely and completely to the survey and those that did not submit complete blood glucose datasets for the whole time frame. The time frame of interest was from September 2008 to July 2014, which included the publication of the NICE-SUGAR trial and the SSC guidelines.

Survey
To ensure clarity and consistency, members of our multicentre research group (DD, RB, MJS) assessed the survey for face and content validity before the final version was compounded and sent to the National Intensive Care Evaluation registry. The units received the survey through the National Intensive Care Evaluation registry via email with a link to an online questionnaire in November 2011. A reminder was sent within one month if there was no response. The survey was repeated once for the selected ICUs in May 2014, again through the registry via email, also with a reminder within one month. The survey was repeated to also include the data available after the publication of SSC guidelines.
The survey had two simple questions focusing on changes in the targeted blood glucose levels in the guideline for blood glucose management (see Appendix):

Analysis
Responses to the survey were collected through and anonymised by the National Intensive Care Evaluation registry, where the blood glucose datasets and the survey responses were labelled with meaningless codes allowing coupling of data without breaching the anonymity of the units.
Blood glucose metrics were calculated per individual ICU, and per admission category (i.e. surgical vs non-surgical patients). The main exposure variables were the dates of publication of the NICE-SUGAR trial (in March 2009) and the SSC guidelines (in January 2013). We considered these two publications to likely change clinical practice, or to trigger changes in the local guidelines for blood glucose management. Secondary exposures were changes in the local guideline for blood glucose management, revealed by the survey. Blood glucose metrics were summarised per period of exposure.

Statistical and SPC analysis
Data were reported as means (SD) or medians [IQR] where appropriate. Demographic data were summarised for all ICUs together and per unit, with each ICU having a meaningless number only used for comparisons. Descriptive analyses were performed with R (version: 3.1.1; R Foundation for Statistical Computing, Vienna, Austria), with p < 0.05 representing significance.
We used statistical process control (SPC) analyses to graphically describe glucose measurements and identify changes in blood glucose control.21-23 One of the SPC tools is the control chart. A control chart is a graph of data over time with three lines: the centreline (reflecting the mean) and an upper and lower limit (± 3 sigma from the mean). When the data points are, without any special pattern, within the control limits then the process is ‘in control’ and stable. With control charts a differentiation could be made between common cause and special cause variation. A common cause variation is an inherent and hence expected variation of the process. A special cause variation is a variation that is not expected and is caused by an external factor (e.g. changes in the local guideline for blood glucose management). We were interested in detecting sustainable changes over time, and specifically changes that show a shift in the mean of a process. We hence used the following common rule for detecting special cause variation: a ‘run’ of nine consecutive points (here each point reflects a complete ‘month’) on one side of the centreline. There are other rules for detecting other kinds of changes, such as isolated extreme points or local trends, but our chosen rule detects significant change in the mean over time, which was of interest to us. These nine consecutive points at one side of the centreline were used to recalculate the mean and control limits, which were extrapolated to subsequent months until a new significant change or until the end of the study period.24 Control charts were generated per ICU and per admission category group (i.e. surgical vs non-surgical patients).

Demographics
From 1 January 2008 to 30 June 2014, 49 ICUs sent blood glucose datasets to the National Intensive Care Evaluation registry. After excluding 32 units that could not provide the registry with a precise and complete response to the first survey, and after excluding ten units that provided blood glucose datasets that were either incomplete, or contained too many duplicate, extreme, or missing values, the final study population consisted of 44,767 patients admitted to seven ICUs (table 1). For the total group of patients we found that they were predominantly male, and most patients were admitted after surgery. Patient characteristics did not change over time. The units were all mixed medical-surgical units, four with a teaching affiliation. Also, the unit-level characteristics did not change over time.

Trends over time in metrics for blood glucose control
An interrupted time-series analysis, with the publication of the NICE-SUGAR trial and the SSC guidelines as exposures, showed that the mean blood glucose level increased from 132 [121-146] mg/dl before publication of the NICE-SUGAR trial to 143 [129-159] mg/dl after publication of the SCC guidelines (figure 1, upper panel).
Furthermore, the relative proportions of hypoglycaemic and severe hypoglycaemic measurements decreased over time, while the relative proportion of hyperglycaemic and severe hyperglycaemic measurements increased. There were notable differences between ICUs: in some units no, or only modest changes were noted, while in other units large changes were seen in almost all metrics (figure 1, upper panel). In one unit the metrics moved in a direction other than expected based on the changes in the local guideline for blood glucose management (unit 6). An interrupted time-series analysis with changes in the local guideline as the exposures showed similar patterns (figure 1, lower panel); trends were not different for non-surgical and surgical patients (data not shown). 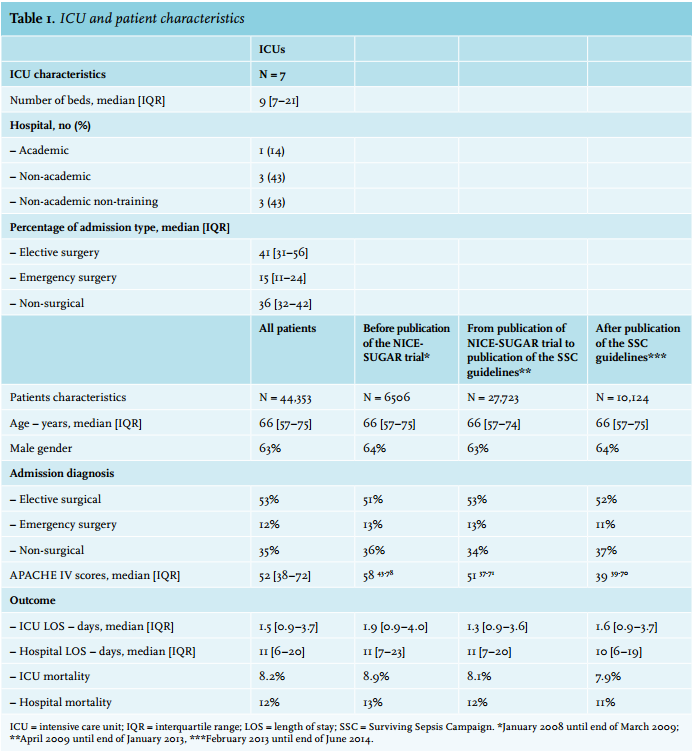 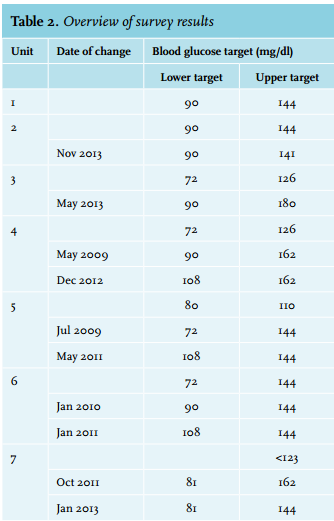 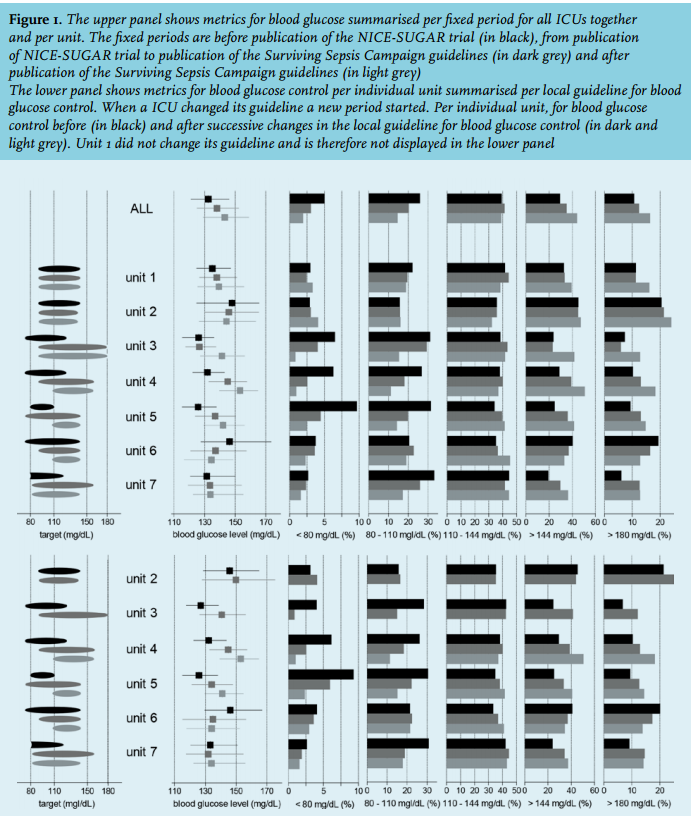 Local guidelines for blood glucose practice have changed in ICUs in the Netherlands since the publication of the NICE-SUGAR trial and the new SSC guidelines. Trends in the metrics for blood glucose control, however, suggest only modest adoption of tight glycaemic control. 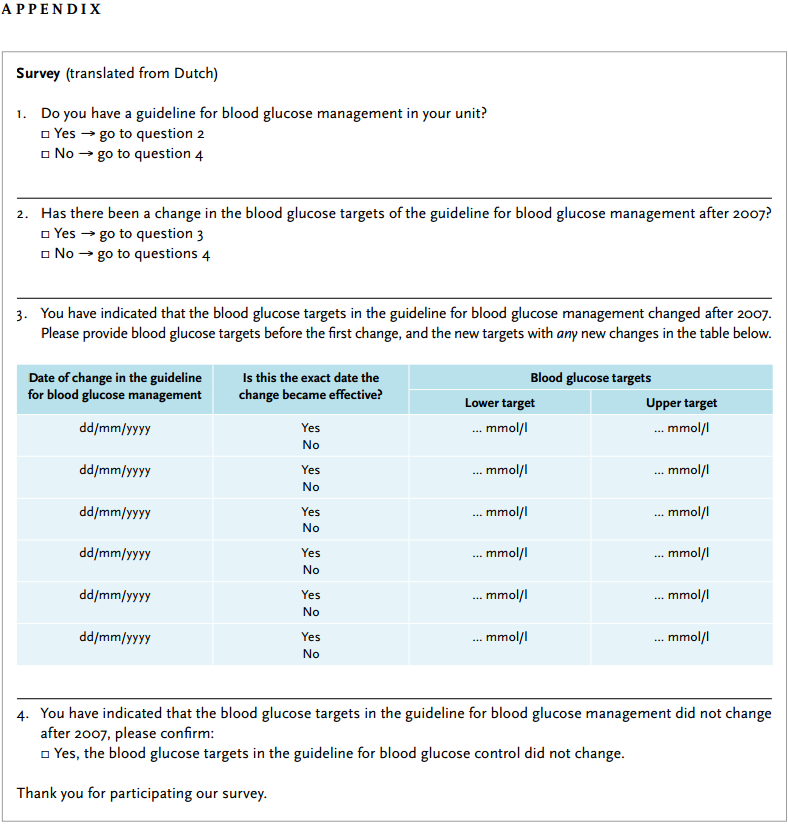