Prevalence, risk factors and prognosis of hypernatraemia during hospitalisation in internal medicine

Patients
Patients hospitalised in a 36-bed internal medicine department from January 2010 to May 2012 were retrospectively identified through the administrative database. Those with at least one plasma sodium ≥ 150 mmol/l (indirect potentiometry, Architect ci8200, Abbott Diagnostics, Rungis, France) during their stay were identified through the laboratory results database. Each hypernatraemic patient was individually matched for sex and age (± 1 year) with one patient hospitalised during the same period in the same department but who always remained normonatraemic (plasma sodium between 135 and 145 mmol/l).

Data collection and definitions
Data were collected, as appropriate, through the administrative and laboratory databases or chart review. Age, sex, chronic diseases, and functional ability were recorded for each patient. The Charlson index was used as a summary measure of comorbidities.6 We also considered the following data at admission: body temperature > 38°C, presence of oedema, systolic blood pressure (SBP), heart rate (HR), shock index (defined as the HR:SBP ratio), ongoing diuretic treatment, and estimated glomerular filtration rate (eGFR) according to the CKD-EPI equation.7 Main diagnosis, inpatient death and length of stay were recorded at the end of the stay.
Increased extracellular fluid volume was defined by the presence of oedema. Patients were defined as bedridden if they stayed in their bed to eat, to be washed and to pass stools. Patients were defined as autonomous for meals if they were able to ask for food and beverages and to eat and drink items within their reach without help.

Statistical analysis
The study period was determined by the possibility to retrieve and match biological and administrative data from hospital databases rather than by a formal sample size calculation. We first compared the sex and age of patients with at least one plasma sodium ≥ 150 mmol/l during their stay with all other patients. We then compared characteristics at presentation and outcomes of patients with at least one plasma sodium ≥ 150 mmol/l and matched controls who remained normonatraemic during their stay.
Descriptive statistics are reported as median [interquartile range] for continuous data and number (percentage) for categorical data. Differences were tested by the Mann-Whitney and the Fisher’s exact test, respectively, for unpaired comparisons, and by the Wilcoxon signed-rank or McNemar test for paired comparisons. Interaction tests were carried out with conditional logistic regression to check for a subgroup effect (pre-existing vs acquired hypernatraemia) on length of stay and in-hospital mortality. Differences were considered statistically significant if p < 0.05. All statistical analyses were performed with Stata 9.2 (StataCorp, College Station, Texas). 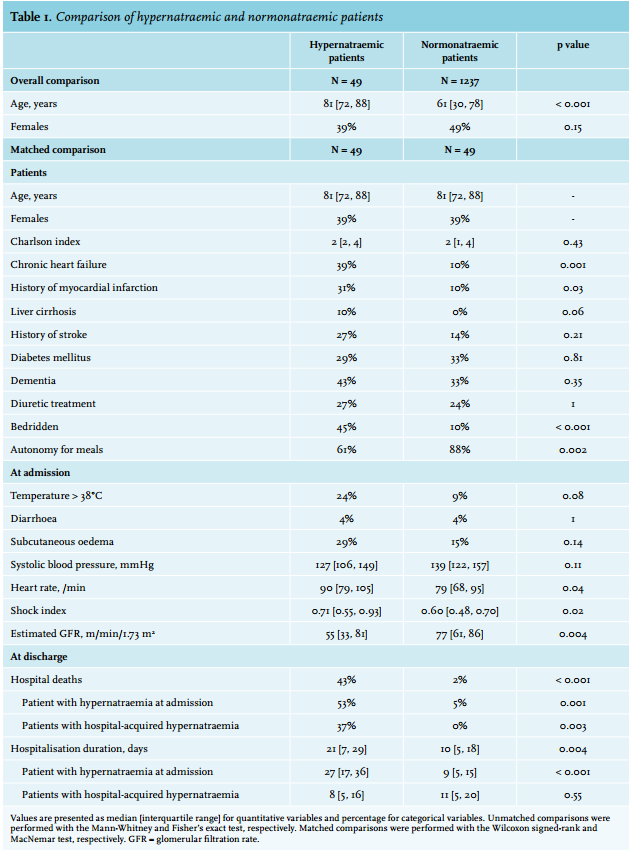 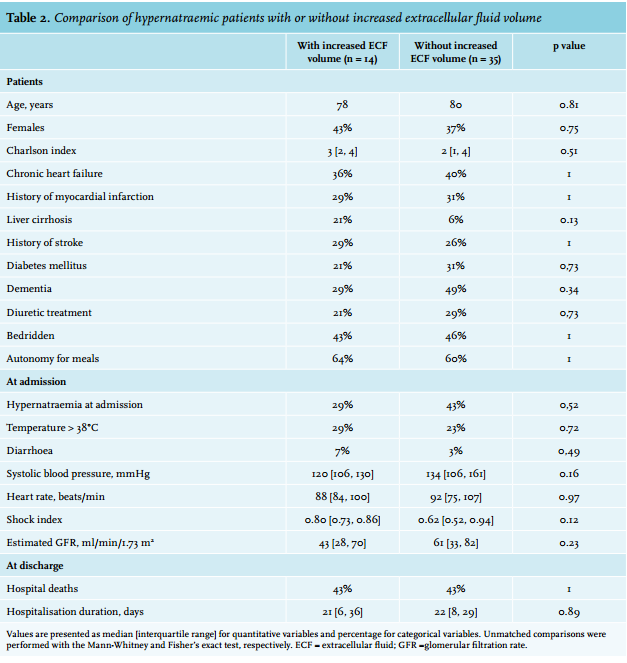 Summary of results
About 3% of patients in a general internal medicine ward have hypernatraemia at admission or develop it during hospitalisation. They are older than other patients. Compared with sex- and age-matched normonatraemic controls, they have a similar number of significant comorbidities but of a different nature and with different functional consequences. Namely, they are more likely to have heart disease, to be bedridden and to depend on help for water intake. Hypernatraemic patients also have higher in-hospital mortality and longer hospital stays, especially when hypernatraemia is already present at admission.

Limits and strengths
Our study is limited by its retrospective and monocentric design and the small population analysed. Retrospectively collecting the clinical data of all normonatraemic patients was beyond our resources. However, matching is a powerful and hypothesis-free means to control for important confounding factors, such as age in our case. The comparison of hypernatraemic patients with or without increased extracellular fluid volume especially lacks power and we may have been unable to identify true differences between these subgroups.
Although the Charlson comorbidity index is validated and commonly used, this aggregated score masks different levels of severity for each disease and different patterns of association between them. Several substances and procedures that might influence serum electrolytes such as parenteral fluids and tube feeding were not considered. Parenteral fluids are likely to play a role in preventing hospital-acquired hypernatraemia, but we could not retrospectively retrace the data on administrated fluids, especially those used as a vehicle for parenteral medications. This study, like many others, cannot separate the contribution of hypernatraemia itself to mortality from that of the underlying frailty and acute condition.30 The present results can therefore not predict the impact of hypernatraemia correction on outcomes.
Nevertheless, our study has several strengths. Most published evidence on hypernatraemia in hospitals is over 10 years old and relates to intensive care units. Patients and management in our study are representative of contemporary in-patient recruitment and of current practices in a general internal medicine department. The matched design allows to control for age, the most important risk factor of hypernatraemia, and to look for independent risk factors. Comorbidities, functional status and extracellular fluid volume were taken into account.

Perspectives
The present study confirmed that elderly and dependent people are at risk to develop hypernatraemia, a condition associated with a poor prognosis. These results underscore that healthcare professionals and other caregivers need to increase their awareness and pay close attention to preventing water imbalance in home-cared and hospitalised elderly patients.12,19 The retrospective review of our patient records showed that administrated parenteral fluids are not appropriately traced, especially those used as a vehicle for parenteral medications, which is left to the nurses’ choice (in France). In many patients, these fluids add up to a large volume with possible clinical consequences in patients with or at risk of water and/ or sodium imbalance. The rational choice of these fluids and their prescription by physicians is an area for practice improvement.
When it comes to the consequences for clinical research, an evaluation of interventions to lessen the risk of hypernatraemia in at-risk patients may contribute to identifying the best preventive strategies. Moreover, as referred to before, the contribution of hypernatraemia itself to mortality cannot be separated from that of the underlying frailty and acute condition. The impact of hypernatraemia correction on prognosis needs to be assessed by interventional studies.

Hypernatraemia is more likely to occur in dependent patients, but with no more comorbidities than others. Unlike classical teaching, it is often associated with increased extracellular fluid volume even in non-ICU settings, due to heart failure, liver cirrhosis or hypoalbuminaemia of various causes. Hypernatraemia is a powerful risk factor for hospital death and longer hospitalisations, especially when it is present at admission.

The authors have no conflict of interest to disclose.