A 66-year-old Caucasian male patient presented to our emergency department with severe pain and bluish discoloration of his left foot that began acutely the day of his presentation (figures 1 and 2). Opioids had no effect on the patient’s pain. A week before his presentation the patient had been diagnosed with a deep vein thrombosis (DVT) of the left leg. He had been anticoagulated with fraxiparin in a therapeutic dose and acenocoumarol. Three days after his DVT was diagnosed – and while taking anticoagulants – pulmonary emboli were diagnosed.
Physical examination revealed a man in obvious distress due to pain with a heart rate of 84 beats/min, a blood pressure of 165/97 mmHg and an oxygen saturation of 97%. The patient’s left leg was slightly oedematous distal to the knee and his left foot was cool in comparison to the right. A bluish mottling of the left foot and ankle was noted. Arterial pulsations were palpable in the left groin but were not palpable in the left popliteal fossa or foot. Arterial pulsations were normally present in these locations in the right leg. Doppler examination revealed biphasic pulsations of the left posterior tibial and dorsalis pedis arteries. Sensitivity to light touch and motor function were diminished in the left foot and were normal elsewhere.
Laboratory values included a lactate level of 0.9 mmol/l and a creatinine kinase level of 20 U/l which are within the normal range. The INR value was 1.71. 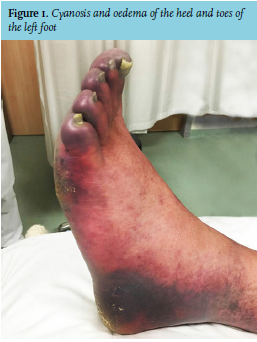 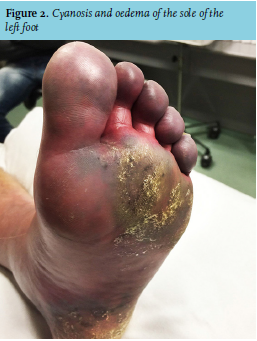