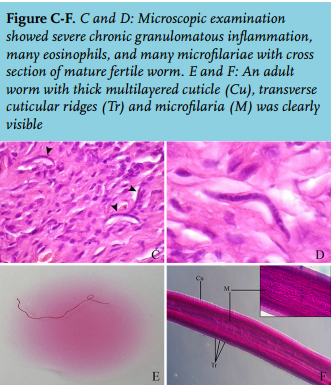 
The nodule was first excised under local anaesthesia. Microscopic examination showed severe chronic granulomatous inflammation, many eosinophils and, interestingly, many microfilaria (figure C and D) together with a cross section of a mature fertile worm (with evidence of incomplete removal of the mature worm). A second attempt to extract the mature worm was undertaken during a slitlamp examination when a coiled live worm, approximately 20 cm long with a maximal diameter of 450 µm, was removed from the subconjunctiva with no difficulty (figure E). The worm was examined microscopically. An adult worm with a thick multi-layered cuticle, prominent transverse cuticular ridges (Tr) and microfilariae (M) was clearly visible (figure F). The worm and the nodule were sent in alcohol and glycerine medium to the Center for Disease Control (CDC). Considering these features, along with the report from the CDC, the worm was identified as Onchocerca volvulus. Onchocerciasis, also known as river blindness, affects about 18 million people in endemic areas, resulting in severe visual impairment or blindness for approximately 2 million. The disease is transmitted through the bite of the black fly, which breeds in fast-moving rivers and streams. The fly injects larvae of the parasite worm into human skin, whose microfilaria migrate to superficial tissues, and may invade any part of the eye. Eye involvement (e.g. anterior segment involvement due to microfilaria, optic neuritis, choroidoretinal scarring, glaucoma, intraocular inflammation, visual field loss) is well-known in endemic areas.1
For onchocerciasis affecting people in endemic areas or moving outside endemic areas, ivermectin may be given annually for the lifetime of the adult worm (15 years).2,3 Although our patient was not from an endemic area and had no travel history to those regions, she was managed with this treatment after removal of the worm and had an uneventful follow-up. It is worth mentioning that due to paucity of data, there is no conclusive recommendation on treatment of the patient in non-endemic areas.

The authors thank the Center of Disease Control for reviewing this case and confirming the diagnosis.