Answer to Photo Quiz: A patient with right-sided deep venous thrombosis and lymphadenopathy on ultrasound 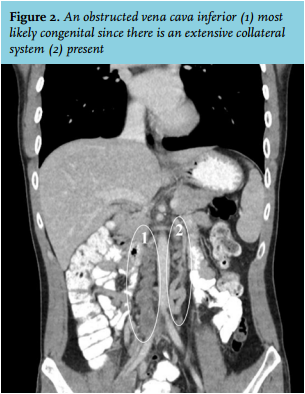 
DVT as a result of an obstructed vena cava inferior (IVC; figure 2 no. 1) which is most likely to be congenital since there is extensive azygous and hemiazygous circulation (figure 2 no. 2). DVT has a multifactor aetiology which includes a state of hypercoagulability or venous stasis. The incidence of DVT increases with age. The incidence of DVT in patients younger than 40 is estimated at 1 per 10,000. In patients younger than 40 years an IVC anomaly is present in 5-6.7% of the cases.1,2 These anomalies include absence of the suprarenal or infrarenal segment or a double IVC with suprarenal anomalies.3,4 Formation of the IVC is a complex process which consists of fusion and regression of the three paired veins comprising the supracardinal, posterior cardinal and subcardinal veins. Anomalies of the IVC is a result of impaired fusion and regression of these three paired veins.4 In patients with a congenital IVC anomaly a prominent azygos and hemiazygos system is present to assure blood flow from the distal extremities to the heart. However, blood flow in these collateral systems is inadequate thereby predisposing to DVT. In 35.4-50% the DVT is bilateral compared with 10% in patients without an IVC anomaly. More than half of the patients with DVT and an IVC anomaly also had a thrombophilic defect (such as deficiency of antithrombin, protein C, or protein S, antiphospholipid antibody syndrome, a factor V Leiden mutation or a prothrombin gene mutation), thereby adding to the risk of developing DVT and suggesting an interaction between IVC anomaly and thrombophilic defects in the pathogenesis of DVT.2,3 However, literature is lacking on this hypothesis.
Our patient had bilateral DVT, which was more extensive in the right leg than in the left. Besides the obstructed IVC, CT images did not show any other vascular anomalies. It is suspected that the back pain was caused by growth of a pre-existing DVT which occurred as a consequence of the insufficient blood flow in the collateral systems, thereby predisposing to DVT. Unfortunately, no radiological images were taken at a younger age. The patient was treated with a vitamin K antagonist and compression stockings. Ten days after starting the initial treatment the back pain faded and was absent a month later. Since the DVT is very extensive, treatment with a vitamin K antagonist will be continued for at least two years after which an even longer treatment will be considered. The patient has refused analysis for thrombophilic defects for the moment since it would not have any consequences for now.
In our hospital it is protocol to treat patients with a DVT with vitamin K antagonists. However recently new oral anticoagulants (NOAC) are also being used and studied for the purpose of extended treatment of DVT. Studies show that NOACs are non-inferior compared with vitamin K antagonists in treating DVT and have less adverse complications such as bleeding.5 Therefore DVT could also be treated with a NOAC. However, there is no antidote for NOACs as there is for vitamin K antagonists.