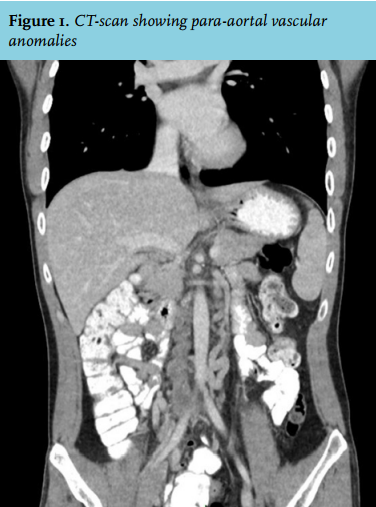 
A 27-year-old male without a medical history went to the general practitioner complaining of back pain which radiated to the groin. The general practitioner referred the patient to the radiologist for an ultrasound of the groin and lower abdomen. The radiologist confirmed a deep venous thrombosis (DVT) of the right popliteal vein to the femoral vein and para-aortal lymphadenopathy. No provocative factors for the DVT were found. The patient was not on any medication. He did not smoke or do drugs and only drank alcohol socially. His family history was positive for a brother with testicular cancer and a grandmother on his mother’s side had a DVT in puerperium. The family history was negative for clotting or congenital disorders. On suspicion of a germ cell tumour, a testicular ultrasound was performed that showed no pathological testicular masses. The tumour markers beta-human chorionic gonadotropin and alpha-fetoprotein were not elevated. Since a malignant origin for the DVT and para-aortal lymphadenopathy was suspected a CT scan was performed.