CT scan of the thorax and abdomen revealed mediastinal and axillary lymphadenopathy with multiple metastases in the lungs and subcutis (figure 2). Histological material was obtained by excision of the left axillary lymph node. This revealed an undifferentiated tumour, of which the differential diagnosis included a variety of entities, such as undifferentiated carcinoma, lymphoma, neuroendocrine carcinoma and melanoma. Immunohistochemical staining showed positivity for S100 and CD56, while the tumour tested negative for leukocyte common antigen, cytokeratin and chromogranin. Additional immunohistochemistry showed that part of the cells reacted to CAM 5.2, Melan-A and HMB 45, which is compatible with the diagnosis of a melanoma (figure 3).1 In retrospect the patient had noticed a naevus on his chest, close to the xiphoid process (figure 1), which had changed during the past few months. Biopsy of the lesion was taken and showed atypical melanocytic proliferation without any signs of epidermal involvement, thus concluding that this was a metastasis of a melanoma. Further examination of the skin by a dermatologist did not reveal any other suspicious lesions.

As far as we know, this is the first case described in the literature of a melanoma presenting with bilateral axillary metastases. In the last ten years the incidence of melanoma has almost doubled to about 5000 per year in Netherlands.2
About 800 patients are diagnosed annually with metastatic disease stage 4. In patients without metastases or resectable stage 3 melanoma, surgical excision is the treatment of choice and can often be curative. Adjuvant treatments with targeted therapies or immunotherapies are still under investigation for high-risk patients. Treatment of unresectable cases has proven to be difficult. Treatment options for metastatic melanoma include resection, radiotherapy, chemotherapy, immunotherapy and targeted therapy depending on tumour and patient characteristics. During the last few years the development of targeted therapy and immunotherapy have led to prolonged survival compared with the conventional chemotherapeutics such as dacarbazine. The best examples of both therapies are the B rapidly accelerated fibrosarcoma (BRAF) inhibitors vemurafenib or dabrafenib and the monoclonal antibody ipilimumab, respectively. This antibody targets cytotoxic T-lymphocyte-associated protein 4 thereby enhancing anti-tumour immunity, resulting in an overall survival benefit and long-term survival in about 20% of the treated patients.3 Vemurafenib or dabrafenib block an oncogenic cascade that is activated in approximately 50% of patients and have a response rate of about 50%, resulting in a three to four months overall survival benefit. BRAF inhibitors are registered for the treatment of patients with metastatic BRAF V600E-mutated melanoma.4,5 Because the metastasis of the presented patient did not have a BRAF V600E mutation, he was treated with ipilimumab. Unfortunately, after two cycles of ipilimumab he presented with symptomatic brain metastases and passed away. 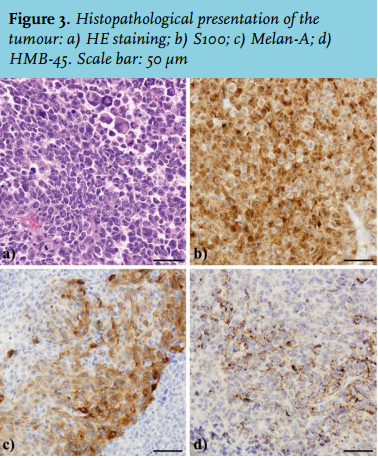 This case illustrates an unusual way in which melanoma can manifest. The differential diagnosis of bilateral axillary lymphadenopathy is extensive and generally implies a systemic process. It includes connective tissue disorders such as systemic lupus erythematosus and rheumatoid arthritis. Granulomatous diseases as tuberculosis and sarcoidosis are also mimickers and therefore should always be in the differential diagnosis. Infectious diseases, such as cat-scratch disease, staphylococcal or streptococcal skin infections, commonly present as tender, swollen lymph nodes near the site of inoculation. However, they are usually limited to one side and preceded by a history of local trauma, injuries or bites. As a symptom, tenderness is in most cases suggestive of a recent inflammatory process. Whereas non-tender enlarged lymph nodes point in the direction of malignancies, such as malignant lymphoma or metastasis of a solid tumour. In conclusion the presented case shows that metastases of melanoma should be considered in the differential diagnosis of a patient presenting with bilateral axillary lymphadenopathy.