Clozapine intoxication due to cessation of smoking and infection 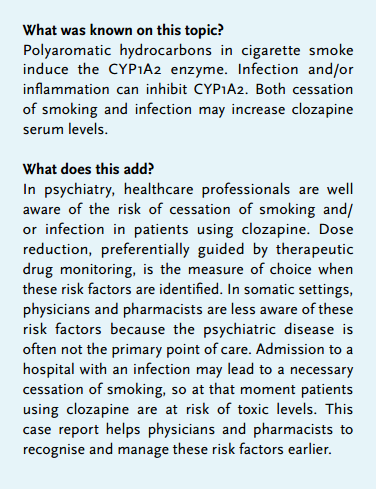 Clozapine is an atypical antipsychotic used in the treatment of therapy-resistant schizophrenia. Its use is limited by rare occasions of agranulocytosis, necessitating frequent monitoring of blood cells. Despite this burden, clozapine use is increasing because it is often the only remaining option in therapy-resistant schizophrenia. We report on a patient on clozapine treatment, who was admitted to a general hospital with pneumonia and who had recently stopped smoking.

A 50-year-old man, suffering from schizophrenia and type 2 diabetes, living in sheltered housing, had been on clozapine treatment for 18 months. Before hospital admission, he had been on a stable dose of 500 mg daily for several months with a plasma level of clozapine of 502 µg/l, which is well within the therapeutic range of 350-700 µg/l (desmethylclozapine 295 µg/l). He had irregular smoking habits, up to 40 cigarettes a day in his smoking periods. A few weeks before admission he had ceased smoking. His daily medication included paroxetine, simvastatin, metformin, gliclazide, lorazepam and hydrocortisone/miconazole ointment. He presented to the emergency department with dyspnoea, chest pain and cough. There was no fever, but the laboratory parameters showed a leucocyte count of 32.9 x 109/l and a C-reactive protein of 256 mg/l. Chest X-ray showed empyema in the right chest. Because of respiratory insufficiency, he was admitted to the intensive care unit (ICU), intubated and sedated for 11 days. Empiric antibiotic therapy was started with ceftriaxone and erythromycin. The empyema was treated by video-assisted thoracoscopy, drainage and rinsing with normal saline and streptokinase solution. Medication in the ICU included midazolam, morphine, nadroparin, paracetamol, esomeprazole, phenylephrine, insulin, furosemide, and aerosolised fenoterol and ipratropium. Clozapine was continued on a daily dose of 500 mg.

During routine medication review, it was realised that there were risk factors for inhibited metabolism of clozapine. On day 4, the clozapine serum levels were strongly elevated: clozapine 2663 µg/l and desmethylclozapine 761 µg/l. Toxic side effects of clozapine were not seen, but symptoms such as seizures, somnolence, hypotension, dysarthria, ataxia, balance disorders and sialorrhoea might have gone unnoticed due to sedation. Clozapine treatment was stopped immediately.1
On day 7, the clozapine and desmethylclozapine levels had decreased to 848 and 405 µg/l, respectively. The calculated elimination half-life of clozapine in our patient was 39 hours, compared with a normal half-life time of approximately 14 hours. On day 8, clozapine was restarted at a lower dose of 100 mg a day, and over the next 14 days increased stepwise to the original dose of 500 mg daily. Initially, serum levels decreased to 103 µg/l, and thereafter increased to 386 µg/l. A graphical display of the daily dose of clozapine and serum levels is presented in figure 1.
On day 15, a tracheostoma was placed and weaning of ventilation was started. During the four days after reduction and cessation of the sedation, the patient experienced schizophrenic symptoms, particularly acoustic hallucinations. Although not measured on a daily basis, the clozapine serum levels were probably still subtherapeutic at this stage.
One month after admission, the patient was discharged to his sheltered home. His schizophrenia was stable with a daily clozapine dose of 550 mg and clozapine plasma levels of 353 µg/l at eight weeks after discharge and 611 µg/l at 32 weeks after discharge. 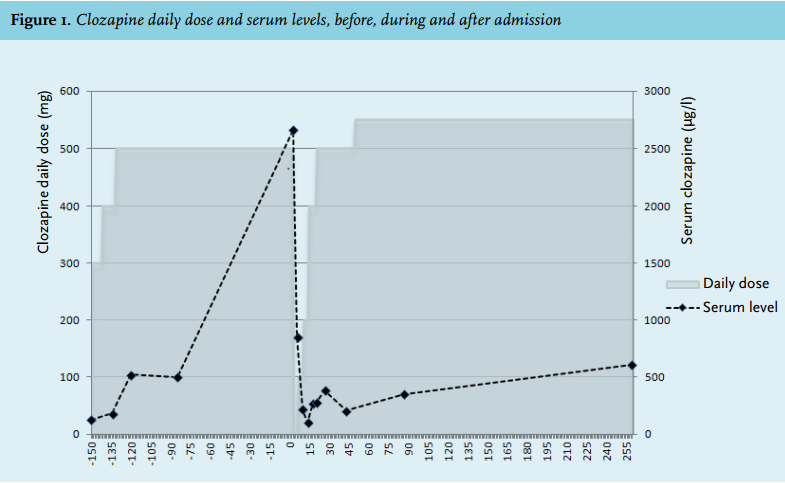 Our patient had been on a stable clozapine intake for a prolonged period, with a therapeutic clozapine level three months before admission. Upon admission to the hospital, two inhibiting mechanisms on clozapine metabolism worked simultaneously: cessation of smoking and inflammation.
Clozapine is mainly metabolised by cytochrome P-450 enzyme system (CYP), particularly CYP1A2. Other enzymes such as CYP2C19, CYP3A4, CYP2D6 and UGT 1A3/4 play a minor role in the metabolic pathway.1,2 Polyaromatic hydrocarbons in cigarette smoke are the cause of CYP1A2 induction.3 A study conducted by Faber et al. showed a rapid decrease in CYP1A2 activity after cessation of heavy smoking, starting a few days after smoking, with an apparent half-life of CYP1A2 activity decrease of 38.6 hours. After seven days of smoking cessation the decrease in CYP1A2 activity is at its maximum,4 leading to a new clozapine plasma steady state level after approximately seven days. In a study performed by Murayama-Sung et al. the average rise in clozapine plasma levels after smoking cessation was 46% (range -9.8% to +244.4%).5
There is evidence that the inducibility of CYP1A2 is dependent on gene polymorphism, with carriers of CYP1A2*1F (-163C>A, rs762551) polymorphism showing an increased inducibility.6,7 Patients with this gene polymorphism have a higher risk of toxic clozapine levels when CYP1A2 induction diminishes after smoking cessation.

Infection and/or inflammation can also inhibit CYP1A2; activity may be reduced by up to 90% because of increases of interleukin-6, interferon and tumour necrosis factor-alpha during acute infectious and/or inflammatory processes.8,9 Clozapine serum levels may increase by a factor 2 to 3.9,10
Separately, the effects of cessation of smoking and inflammation have been documented in the literature, but little is known about the extent of the rise of clozapine serum levels due to the combination of cessation of smoking and infection. The combination of both inhibiting effects resulted in a fivefold increase of clozapine serum levels in this patient. However, it is difficult to unravel the extent of the individual effects of smoking cessation and severe infection on clozapine levels.
Other drugs that are CYP1A2 substrates, such as caffeine, fluvoxamine, olanzapine and theophylline, can also be affected by smoking.11 Decreased theophylline clearance has been described in respiratory infections and pneumonia.12

About 62% of all schizophrenic patients are active smokers.13 Cessation of smoking is thus a frequent issue that arises with clozapine treatment. Healthcare workers in psychiatric healthcare institutions are well acquainted with the phenomena of altered clozapine metabolism at the start or cessation of smoking or with infections, and clozapine dosing is frequently adjusted and clozapine serum levels are frequently monitored.
In somatic healthcare institutions, psychiatric medication is often not the primary focus of care. However, most patients are forced to stop smoking as soon as they are hospitalised. Also infections are a common cause of hospitalisation. Thus, clozapine users who are hospitalised combine these risk factors for toxic clozapine levels. Toxic effects might not be recognised in time due to intubation, artificial ventilation and sedation. There is no antidote for clozapine; in case of severe toxicity, treatment should consist of supportive measures.1
When schizophrenic patients are admitted to somatic hospitals, there is often a strong inclination to continue antipsychotics, especially when psychiatric symptoms are severe. In retrospect, earlier anticipation could have avoided the toxic clozapine levels in our patient. In addition, decision support systems managed by a clinical pharmacist could have been helpful, by identifying all newly hospitalised clozapine users. Dose reduction, preferentially guided by therapeutic drug monitoring, is the measure of choice when risk factors are identified.

Risk factors for toxic clozapine levels due to infection and smoking cessation are often not recognised in somatic settings. Physicians and pharmacists should be aware of these risk factors and should be prepared to manage them adequately.