Diabetes in patients with HIV: patient characteristics, management and screening

The widespread use of combined antiretroviral therapy (cART) has significantly reduced the risk of infectious complications and improved overall survival in patients infected with human immunodeficiency virus (HIV). With the increased success of the treatment of HIV infection, diabetes and other chronic non-communicable diseases (e.g. hypertension and dyslipidaemia) and their complications have become more prevalent.1 As a consequence, a substantial proportion of HIV-infected patients die from vascular events rather than from opportunistic infections or other AIDS-defining illnesses.2 Greater emphasis on the management of the traditional risk factors for cardiovascular diseases is especially important in patients with coexisting diabetes mellitus, because this condition is in itself a cardiovascular risk equivalent.
The prevalence of diabetes has been estimated at 3-14% among HIV-infected individuals and is growing.3-8 Most of these patients develop diabetes after being diagnosed with HIV infection. Insulin resistance plays a prominent role in the development of diabetes in HIV-infected individuals, even at normal body weight.9 A major contributor to insulin resistance is treatment with cART, partly through a direct effect on insulin-mediated glucose transport and in part through the occurrence of dyslipidaemia and lipodystrophy.10 Besides increasing age, other factors that are associated with diabetes in HIV-infected patients include low CD4 count and coexistent hepatitis C infection next to general risk factors for the development of diabetes (e.g. high triglycerides).11,12 The European AIDS Clinical Society therefore recommends measuring fasting plasma glucose at HIV diagnosis, before initiating cART, and at least annually thereafter.13
Currently, there are no specific guidelines for the management of diabetes in patients with HIV, except for references to general diabetes treatment recommendations and the instruction to screen HIV patients for diabetes.13,14 It is unclear to what extent these general guidelines for diabetes are being implemented in HIV care. Indeed, HIV-infected patients are often treated by infectious disease specialists who are less experienced in endocrinology or diabetology, and who may be more focused on managing HIV per se rather than the metabolic sequelae, although this may be different in general teaching compared with university hospitals. To address some of these issues, we describe the characteristics and current management of patients with HIV and diabetes in a cohort of HIV-infected patients in a university hospital in the Netherlands.

We conducted a retrospective survey among patients with HIV who visited the outpatient clinic of the Radboud university medical centre between August 2012 and November 2013. All of the 518 HIV-positive patients were included. Patients with diabetes mellitus were identified from the clinic’s database, in which diabetes diagnosis was based on documentation by their specialist or use of glucose-lowering agents. The distinction between type 1 and type 2 diabetes was made on clinical grounds, anti-GAD antibodies were only measured sporadically. The following information was collected from all subjects using the database and individual case records: gender, age, race, weight, height, smoking status, age at HIV diagnosis, CD4 cell count, viral load, type of cART, glucose, HbA1c, mean blood pressure, last measured lipid values, serum creatinine and use of other medication. For all patients with diabetes, additional data were collected including type of diabetes, age at diabetes diagnosis, use of insulin or other glucose-lowering medication, and urinary albumen excretion (by albumen-to-creatinine ratio, if available). Body mass index (BMI) was calculated as weight in kilograms divided by the square of height in meters.
According to the national general practitioners guideline for managing diabetes (Dutch NHG standard),15 goals for diabetes care were defined as: HbA1c < 7% (53 mmol/mol), fasting plasma glucose < 7 mmol/l, systolic blood pressure < 140 mmHg, LDL cholesterol < 2.5 mmol/l, triglycerides < 4.5 mmol/l and BMI < 25 kg/m2. Besides achievement of treatment goals, we evaluated the frequency of monitoring relevant parameters including body weight, blood pressure, examination of lower extremities for neuropathy and peripheral artery disease, fasting glucose, HbA1c, serum creatinine and lipids, albumen-to-creatinine ratio in spot urine samples, and ophthalmology examinations in all patients with diabetes.
Statistical analysis was conducted using SPSS, version 19. Categorical variables were compared using Pearson’s chi-square. Continuous variables were compared using Student’s t test when normally distributed; the Mann-Whitney U test was used when variables were not normally distributed. Results were considered statistically significant if the corresponding P-value was < 0.05.

Of 518 HIV-infected patients, 28 (5.4%) had diabetes, mostly type 2 (n = 25, 89%). Twenty patients were receiving cART before diabetes was diagnosed (71%), while in eight patients diabetes was diagnosed before HIV. Diabetes was treated with insulin in 36%, either alone or in addition to oral medication, and with oral glucose-lowering drugs only, mostly metformin, in 60%. Antihypertensive drugs, lipid-lowering agents and platelet inhibitors were used by 68%, 57% and 25% of diabetic patients, respectively (table 1). 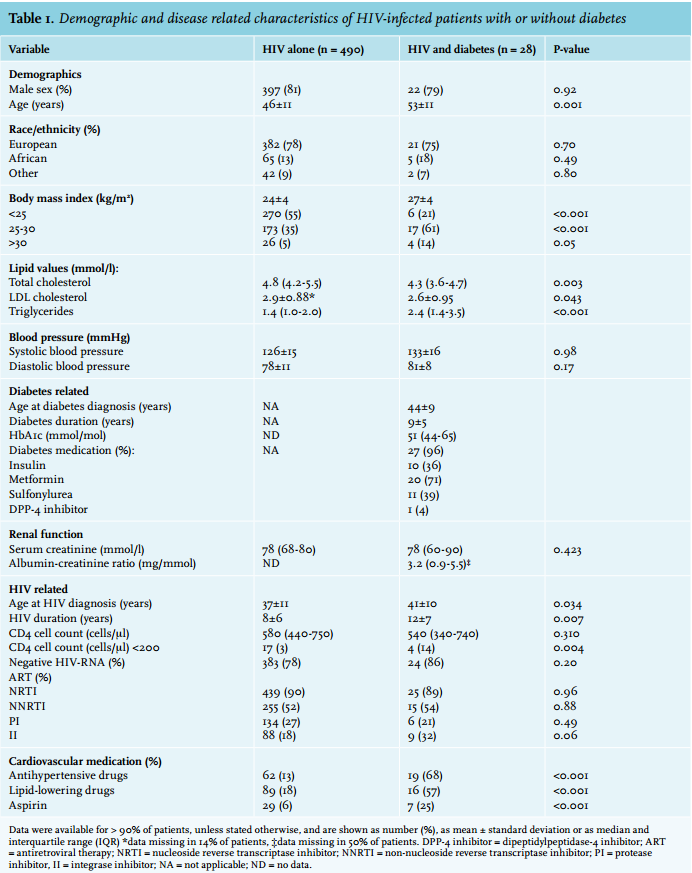 Apart from higher glucose and HbA1c levels, patients with HIV and concurrent diabetes were older, were more likely to be overweight, and had higher triglyceride levels compared with patients without diabetes. There were no differences in blood pressure, whereas total and LDL cholesterol levels were even lower in patients with diabetes, probably due to more frequent use of blood pressure and cholesterol-lowering medication (table 1). With respect to HIV status, HIV-infected patients with diabetes were more likely to have a CD4 cell count < 200 cells/µl, despite a longer duration of HIV treatment (OR 5.6, p = 0.02). More patients with diabetes used integrase inhibitors; physicians probably opted for this relatively new class of cART because they are less toxic compared with the older drugs, metabolically neutral and only rarely cause drug interactions. 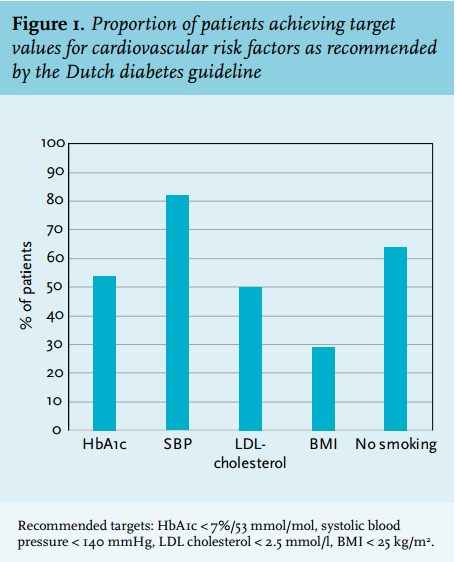 Figure 1 displays the proportion of patients with HIV and diabetes achieving treatment goals, as recommended by Dutch General Practitioner’s guidelines on cardiovascular risk management in people with diabetes.15 Systolic blood pressure was below the target of 140 mmHg among 23 patients (82%), but fewer patients reached the other treatment targets (29-64%). None of the patients met all the treatment targets, while five patients (18%) had only one treatment goal on target.
The quality of diabetes management was assessed by measuring various process indicators on biomarkers for cardiovascular risk and screening for microvascular complications (figure 2). Plasma glucose levels or HbA1c were measured at least once a year in all patients. Body weight, blood pressure and lipids were measured at least once a year in 75%, 86% and 71% of patients, respectively. Renal function was determined once a year in all patients, but screening for urinary albumen excretion was missing in 71% of the patients. Information on foot and eye examinations was lacking in 89% and 75% of patients, respectively. Two-yearly eye examination was performed in 36% of patients. 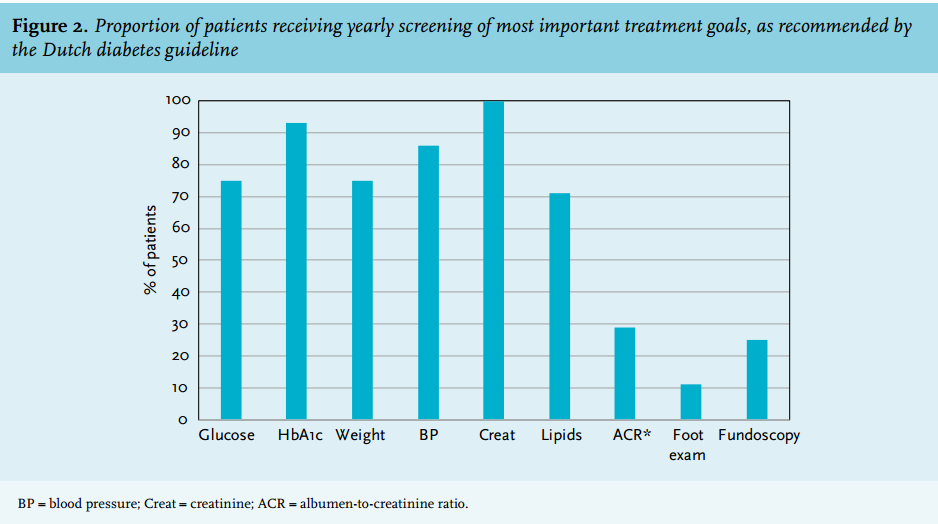 Our findings regarding achieving other diabetes-related treatment goals corroborate in a large part with those of Adeyemi et al., who examined to what extent goals recommended by the American Diabetes Association (ADA) were met in 216 HIV-infected patients with diabetes.19 The only exception was that less of their patients achieved the ADA blood pressure target. However, since the average blood pressure values were comparable with our data, the latter was probably related to the stricter blood pressure target used (< 130/80 mmHg versus < 140 mmHg).
Most diabetes guidelines recommend at least annual testing of HbA1c (or fasting plasma glucose), serum creatinine, lipids, blood pressure and body weight, as well as screening for retinopathy, nephropathy and neuropathy.21 Management of our patients with coexisting HIV was largely in line with these recommendations, except that screening for microvascular complications was insufficiently performed.
Because of the high risk of diabetes in HIV-infected patients, the European Aids Clinical Society recommends screening all patients for elevated glucose levels at HIV diagnosis, before starting therapy and yearly thereafter.13 In this study, almost the entire population had been screened for diabetes at some point from the moment they entered the database. However, screening was not performed in the past year in 42% of patients, which means that the actual prevalence of diabetes in our population may in fact be higher. Early diagnosis of diabetes is important to allow timely initiation of modifiable cardiovascular risk-reducing strategies. Indeed, the risk of myocardial infarction in patients with HIV and diabetes has been shown to be more than twice as high as in healthy subjects.22

This study has several limitations. Because it is a relatively small study from a single university hospital, our results cannot be simply generalised to the entire HIV population. Second, we cannot exclude that some examinations were performed by the general practitioner, although from reviewing individual patient records this only appears to happen rarely, as many HIV-infected patients discuss most health-related issues, including diabetes, with the HIV management team.
This study clearly shows there is room to improve the management of diabetes among HIV-infected patients. Routine screening for diabetes in the non-diabetic HIV population was suboptimal and our analysis disclosed a blind spot with respect to microvascular complications in HIV-infected patients with coexistent diabetes. Future studies should focus on the best and most cost-effective way of delivering appropriate diabetes care to HIV-infected patients. More awareness is needed, as diabetes prevalence will probably increase in the future, especially in the light of an ageing population of HIV-infected patients.

The results presented in this paper have not been published previously in whole or part, except in abstract form at the national Annual Dutch Diabetes Research Meeting 2013 in Oosterbeek, the Netherlands. The authors declare no conflicts of interest. No funding or financial support was received.