Serum electrophoresis performed on our patient showed a rarely encountered serum protein anomaly, where not one but two distinct albumin bands were found (figure 1B). This phenomenon is known as bisalbuminaemia or alloalbuminaemia and is the concurrence of having two kinds of serum albumin that differ in mobility on electrophoresis. It was first described in 1955 by Scheurlen in a diabetic German. It occurs in a hereditary and in an acquired form.1 The acquired (or transient) form of bisalbuminaemia has been described in patients receiving high doses of B-lactamic antibiotics or suffering from pancreatic disease. Hereditary (or permanent) bisalbuminaemia is usually revealed by chance, as it is a relatively rare genetic disorder.2 Several families worldwide have been identified as suffering from hereditary bisalbuminaemia. A variety of polymorphisms and mutations have been reported in the literature in the last decades. Today, 77 mutations of the albumin gene are known, with 65 of them resulting in bisalbuminaemia.3
Bisalbuminaemia causes no symptoms and has most commonly been reported as a benign condition, found as a concomitant phenomenon.4 It is therefore unlikely that the symptoms in our patient are explained by this bisalbuminaemia. We were unable to perform serum protein electrophoresis on our patient’s family. There are no guidelines or recommendations available regarding follow-up, its clinical significance is uncertain. 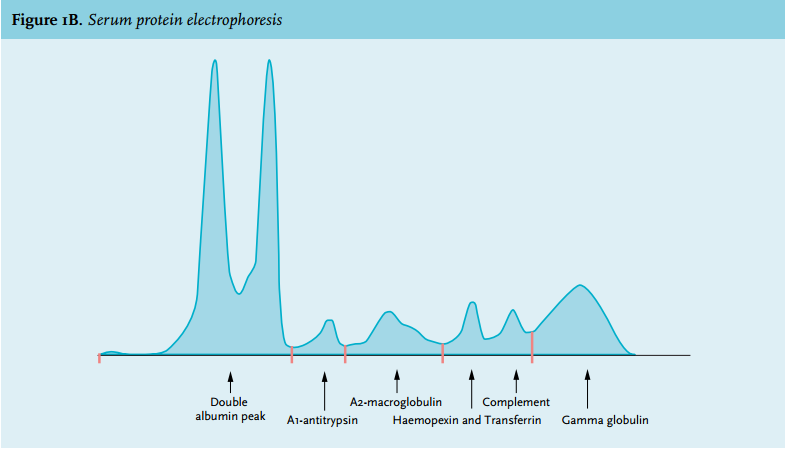