Risk of rabies exposure among travellers

Rabies is a zoonotic viral disease causing fatal encephalitis in mammals, including humans.1,2 Dogs are the main source of human infections. Rabies causes an estimated 55,000 to 70,000 deaths annually, most of which occur in rural parts of Africa and Asia.2,3 In developed countries, rabies mainly occurs among travellers returning from endemic areas. Rabies is a rare disease in the Netherlands, with five reported cases in the past 50 years. However, three of these five patients were treated in our hospital in the past seven years, suggesting an increase of infections. The three patients seen most recently had acquired rabies in Kenya, Haiti and India, respectively, the other two in Indonesia and Morocco.4-8 All died, a tragedy augmented by the fact that rabies is a vaccine-preventable disease. It is not uncommon for travellers to experience a bite or scratch from a potentially rabid animal. According to a recent review, a one-month stay in Southern Asia, Southeast Asia, Central America, South America or Africa is associated with 0.4% chance of experiencing an animal-associated incident (AAI).9
Active immunisation with rabies vaccine can be administered as pre- and post-exposure prophylaxis (PrEP and PEP, respectively). After high-risk (transcutaneous or mucosal) exposure in unvaccinated individuals, passive immunisation with rabies immunoglobulin is included in the PEP regimen. Individuals who received active PrEP have immunological memory that can be activated quickly with post-exposure booster vaccinations. This precludes the need for administration of rabies immunoglobulin in case of exposure, which is expensive and typically not available in endemic areas.10
In recent years, there has been an increase in consultations after high-risk exposures among unvaccinated travellers at our clinic, leading to an increase in the use of rabies immunoglobulin. These patients would have benefitted from PrEP. Therefore, it would be beneficial to specify those at risk of an AAI while providing pre-travel advice.
Previous studies identified travel to North Africa or Southeast Asia, young age, travel to visit friends or relatives (VFRs) or tourist travel as risk factors for AAIs.11-20 Although these descriptive studies are illustrative, they only comprised post-travel surveillance. We compared demographic and travel related factors of those who returned after an AAI to the overall population seen at our pre-travel department. By including this denominator, we were able to compare relative risks. This made more objective identification of populations at risk of an AAI possible.
Furthermore, we described the exposure and management details of these AAIs. Other objectives were to investigate the knowledge of rabies among travellers and factors that influenced the decision to receive PrEP before travel departure.

The Medical Ethical Committee of the AMC approved the study.

Data collection
Electronic patient files of travellers requesting PEP at the AMC between January 2009 and February 2014 were analysed to obtain demographic information (sex, age), travel details (duration, location, type of travel) and AAI related information. This includes time interval between departure and AAI, WHO risk classification, animal species involved in AAI, means of contact with an animal, location of injury, wound care, time interval between AAI and PEP, and rabies immunoglobulin availability at the local hospital. All travellers requesting PEP after experiencing an AAI while traveling abroad were included in this study. We excluded patients who requested PEP after an AAI that occurred in the Netherlands, because our focus was on travellers at risk.
In order to assess which demographic factors and travel characteristics were specific for travellers requesting PEP (PEP group), PEP group travellers who had obtained pre-travel advice were compared with a group of 1749 travellers seen at the pre-travel clinic prior to departure between 2011 and 2012 (pre-travel database). The PEP group were contacted to question whether they had obtained pre-travel advice. If individuals could not be reached but had been given vaccinations prior to this or previous similar travel, it was assumed they had obtained pre-travel advice.
Collection of demographic and travel related details of the pre-travel database travellers is described elsewhere.21 In order to complete missing data from the electronic patient files and to query travellers about the decision to take PrEP, a standardised questionnaire was administered. After providing informed consent, travellers included in this study were asked by either telephone or email to fill in an online survey made with Qualtrics (2005, Provo, UT, USA). The questionnaire included information on traveller’s knowledge, attitude, and practice regarding rabies and rabies prevention. If data in the questionnaire contradicted those in the electronic patient files, the electronic patient file data were used. Travellers who had an AAI may have altered knowledge and attitudes toward rabies. To compare this in the PEP group to those who had not experienced an AAI, we used the same questionnaire in a convenience sample of travellers visiting our pre-travel clinic during 2013.

Definitions and measurements
To assess the severity of AAI, we used the WHO classification, which groups AAI into three categories: I (mild injury: contact with intact skin), II (moderate injury: minor scratches or abrasions without bleeding) and III (severe injury: transdermal exposure).22
The questionnaire aimed to identify factors that influenced travellers’ decisions to take PrEP. These factors were based on elements of health behaviour models, experiences from our vaccination nurses and questionnaires in previous studies.14,23-26 Factors included were: pre-travel advice, previous vaccinations, knowledge, perceived risk and perceived severity of infection, and barriers (vaccination costs and time interval between consultation and departure, perceived risk of side effects of PrEP). Travellers were asked to indicate the importance of perceived risk, perceived severity and barriers on the decision to take PrEP, on a scale from 1 to 6, 1 being not important and 6 very important. 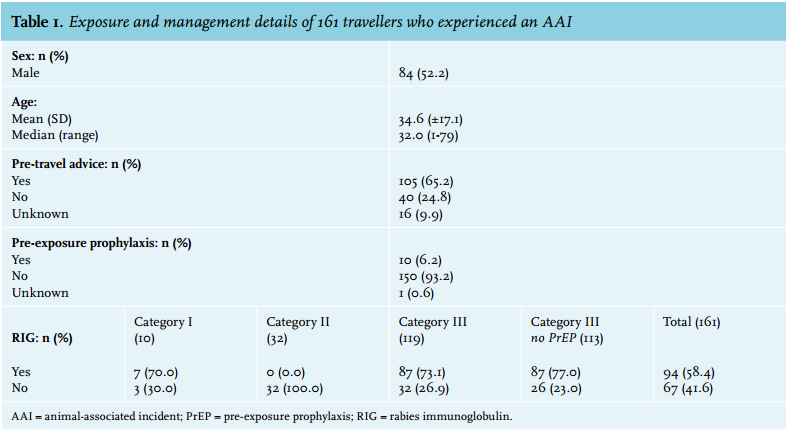 Tourism and travel to Southeast Asia are risk factors for an AAI
Pre-travel advice had been obtained by 105 travellers in the PEP group. We compared these travellers to the pre-travel database (table 2). No differences were found in age, sex or travel duration. Travellers from the PEP group more often travelled as tourists (77.8% vs. 66.1%, p = 0.035), more often visited Southeast Asia (49.5% vs. 30.9%, p = 0.040) and did not visit Western Africa more often (4.8% vs. 12.9%, p = 0.128). The risk of AAIs for tourists has been described in several studies.9,12,15,20,23 In contrast to these and our study, research from Marseille showed that VFR travellers heading to North Africa were predominantly at risk.11 The lack of denominator data in terms of total number of departing travellers and associated relative risks (different travel clinics have different populations) could account for these differing results.
The frequent travel to Southeast Asia among travellers in the PEP group supports findings of earlier studies on PEP-requesting travellers,13,15-20,27 and on rabies contracted among travellers.28 Southeast Asia is one of the most popular travel destinations,29 which may result in frequent reporting in post-travel surveillance studies. With the inclusion of denominator data (travellers seen for pre-travel advice), we show and confirm that travel to Southeast Asia is a risk factor for reported rabies exposure.
Surprisingly, despite our large West-African VFR population, we found a trend association of fewer PEP consultations among travellers to Western Africa. This could either be due to lower risks or, more probably, be the result of less awareness among this population, leading to unreported rabies exposure. Comprehensive and routine surveillance is often lacking in African countries and improvement remains crucial.30,31
The finding that travel duration of travellers in the PEP group did not differ from that of travellers seen for pre-travel advice suggests that long-term travel is not necessarily associated with an increased risk of reported AAIs. Several other studies have also shown that risk of AAI is not specifically associated with prolonged travel.9,14,32,33 Therefore, the Netherlands’ coordination centre of traveller advice (LCR) statement that PrEP should be considered when the intended duration of travel is at least three months must be considered for revision.34 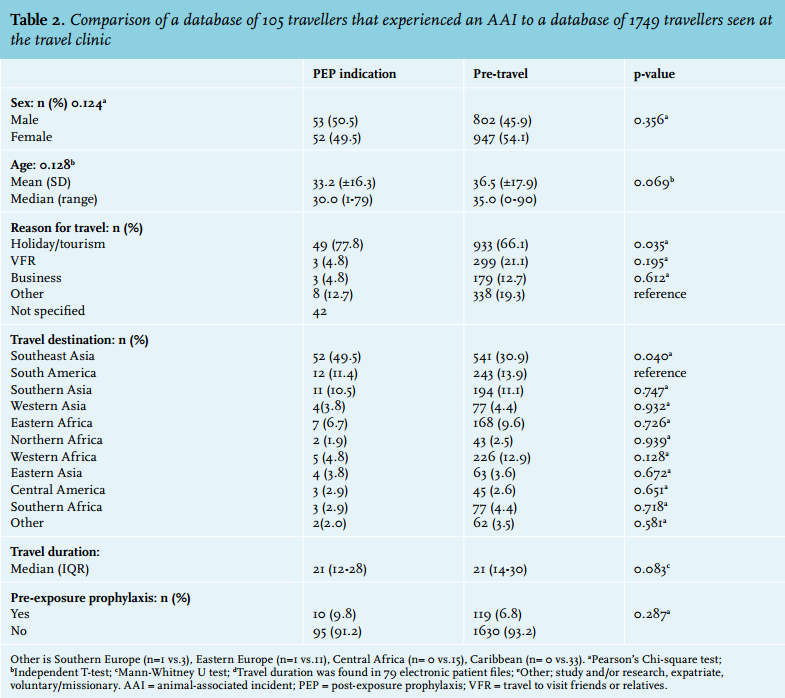 Knowledge on rabies was generally good
To study knowledge of rabies and rabies prevention, 46 pre-travellers and 60 travellers returning after an AAI were interviewed, with comparable results (table 3). In both groups, most travellers were aware that dogs, bats and monkeys can transmit rabies, but very few travellers were aware that all terrestrial mammals are susceptible to rabies (5.0%). In both groups, all travellers but one were aware that rabies is transmissible through bites, whereas fewer knew of the risks of scratches and licks on broken skin. When asked how to prevent rabies infection, most were aware of vaccination (80% in both groups). A minority (13.3%) knew that wound disinfection could also prevent rabies. Overall, both travellers in the PEP group and those interviewed prior to travel had good knowledge of rabies and how to prevent it. These results are comparable with previous knowledge, attitudes and practices (KAP) studies performed in France and among travellers to Southeast Asia.14,23,24 Wound disinfection should be advised during pre-travel consultation as an easy and low-cost way to reduce risk of infection. 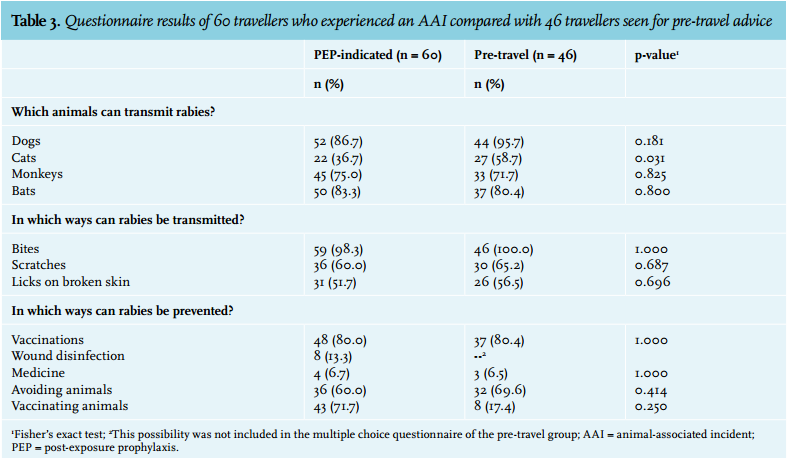 Pre-exposure prophylaxis should be scaled up
Importantly, of 161 travellers who experienced an AAI, only ten (6.2%) had received vaccinations before travel (table 1). This figure is comparable with previously recorded percentages ranging from 0-16% showing that there is ample room for improvement.13,16-20,23

Reducing vaccination costs and reducing the vaccination intervals could increase uptake
Questions exploring the decision to take PrEP among those who had experienced an AAI could not be analysed in groups due to a lack of internal consistency; therefore, all questions were analysed separately. On a scale of 1-6, the perceived risk of exposure to rabies was not rated as an important factor in the decision to take PrEP, (mean 1.98±1.00), whereas perceived disease severity scored high (mean 4.23±1.98). Vaccine costs and a short time interval between consultation and departure were rated as important barriers to the decision to take PrEP (vaccine cost: mean 4.30±1.62; time before departure: mean 4.00±1.94), whereas potential risks of adverse events scored lower (mean 2.43±1.28). No significant differences were found between travellers who took PrEP and those who did not (Appendix 2).
Reducing costs of the vaccination and reducing the vaccination intervals could be an important step in improving the uptake of rabies vaccinations prior to travel. Many previous studies have stated that costs were the main reason for travellers not to be vaccinated.9,14,23,25 The limited timeframe was also mentioned before as a reason for not being vaccinated.14,23 Intradermal schemes, although off-label in most developed countries, are effective and boostable.35-38 We have previously proposed various promising shortened intradermal schemes,39 which are currently being investigated.40-43 Further study of these schemes is important in order to fast-track implementation in clinical practice.

There were several limitations of this study. First, the population that we used as comparison to our case population in order to identity risk factors for an AAI was strictly of a different origin than the cases because the timeframe of inclusion differed. The pre-travel database population visited our AMC travel clinic prior to travel, whereas the PEP population may have visited another travel clinic prior to travel. However, we argue that the comparison is justifiable because demographic and travel characteristics are expected to be similar. By only including those who had obtained pre-travel advice at a travel clinic in the comparison, we aimed to rule out differences in preventive behaviour.

Second, the online survey was administered post-AAI, with a maximum of five years between AAI and survey. This may have resulted in memory bias when filling in the questionnaires. For this reason we used information from the electronic patient files when available.

The results of this study show that pre-exposure prophylaxis rates for rabies are low. Travel to Southeast Asia and travelling as a tourist are risk factors for rabies exposure. Long-term travel was not associated with higher risk of rabies exposure. Dutch travellers generally have good knowledge of rabies and how to prevent it. Tourists travelling to Southeast Asia should be advised to have rabies PrEP. Vaccination costs and a short time prior to departure remain barriers to vaccination.

We would like to acknowledge the employees of the Department of Tropical and Travel Medicine of the Academic Medical Center for collecting the patient data and for administering questionnaires. 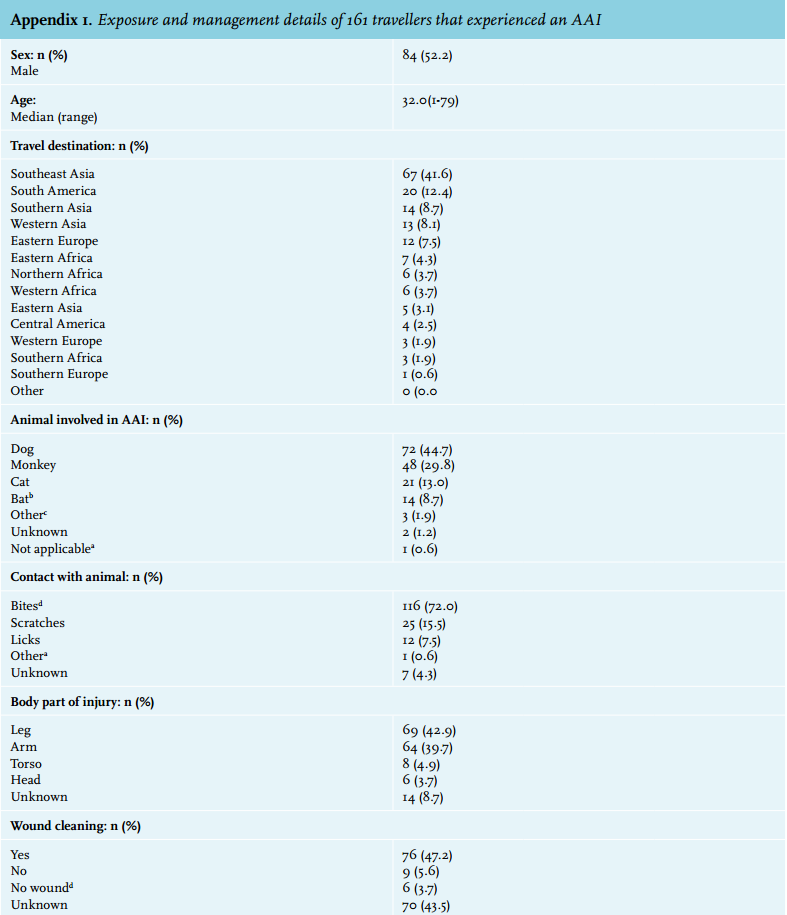 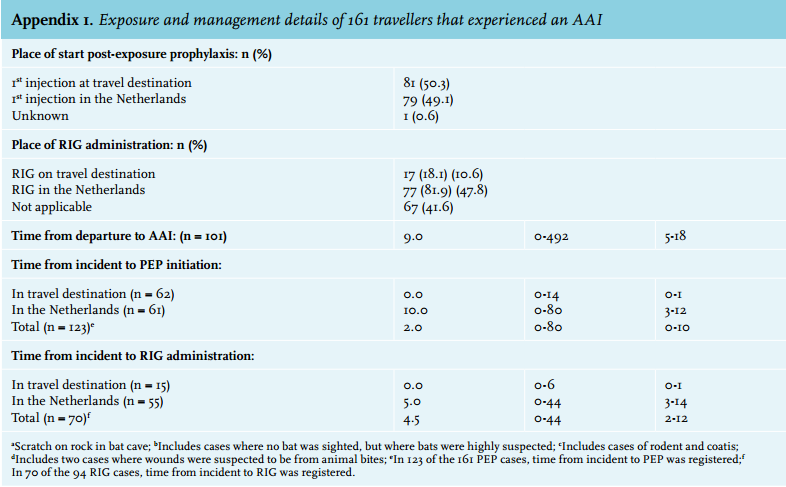 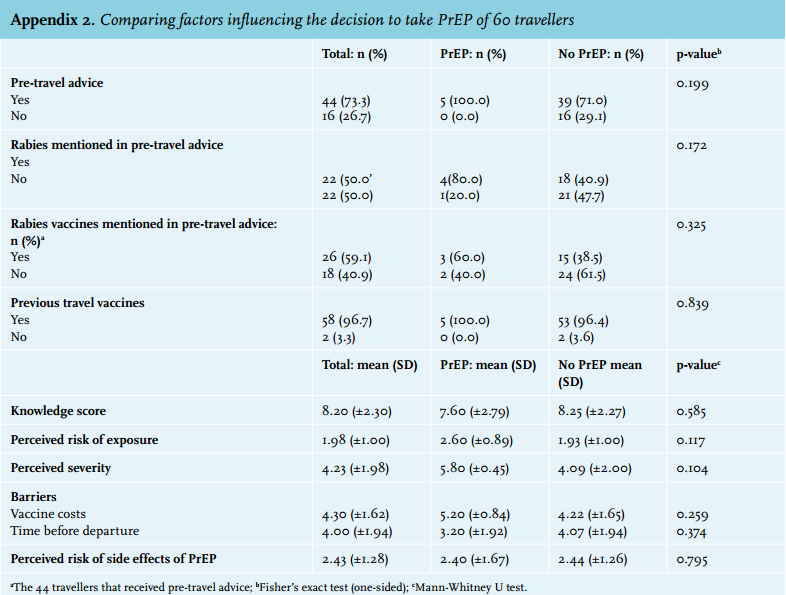