Vancomycin is a glycopeptide antibiotic that is used in the treatment of infections caused by Gram-positive bacteria such as Staphylococcus aureus and Enterococcus faecium. Vancomycin exhibits an intricate pharmacokinetic profile, showing large inter-individual differences, especially in ICU patients.1-3 The pharmacokinetic-pharmacodynamic (PK-PD) parameter area under the concentration curve during 24 hours (AUC) divided by the minimal inhibitory concentration (AUC/MIC) may be the best pharmacodynamic parameter to predict effectiveness of vancomycin.4,5 However, determining this parameter in a clinical setting is complicated. Alternatively, trough serum vancomycin concentration monitoring can be used to measure dosing effectiveness in an accurate and practical manner. Correct timing of actual trough measurement is essential. Current dosing guidelines propose intermittent dosing of vancomycin with target trough levels of 15-20 mg/l.5 Dose optimisation depends on creatinine clearance and body weight.6 Most patients achieve target trough levels with dosages of 15 mg/kg every 8-12 hours.5 To achieve target trough levels in critically ill patients, a loading dose of 25-30 mg/kg body weight with a maximal infusion rate of 10 mg/min can be considered.5 Maintenance doses should be adapted to kidney function and further dose adjustments can be made based on therapeutic drug monitoring (TDM).7

Monitoring is advised at steady state, after the fourth dose.5 Vancomycin is associated with adverse effects, such as nephrotoxicity and ototoxicity.7-9 ICU patients have a higher risk for development of nephrotoxicity than non-ICU patients at a lower trough concentration threshold.10 It has been shown that early achievement of therapeutic levels in critically ill patients results in survival benefit.11,12 Furthermore, an early response to vancomycin therapy is associated with therapy success.13 An initial vancomycin trough level of < 15 mg/l is associated with persistent methicillin-resistant Staphylococcus aureus (MRSA) bacteraemia (OR 4.25, 95% CI 1.51-11.96).12 Therefore, to increase the chance of therapy success, obtaining proper trough levels in the early course of the disease is essential. The ICU and the Clinical Pharmacy Department of the Medical Centre Leeuwarden (MCL) collaborated in composing a simple vancomycin-dosing protocol for ICU patients to optimise treatment. The protocol consists of a weight-based loading dose and a maintenance dose based on the estimated glomerular filtration rate (eGFR).

Guidance on therapeutic drug monitoring (TDM) is provided. Dosing recommendations, based on TDM, are given by the attending pharmacist. The goal of this protocol is to reach rapid therapeutic trough levels of vancomycin. This study evaluates the efficacy of the dosing protocol in obtaining adequate vancomycin levels (> 15 mg/l) within 48 hours of therapy onset. A one-sided limit of > 15 mg/l was chosen since short-term trough levels of > 15 mg/l are not considered toxic and initial therapeutic failure (levels < 15 mg/l) are deemed more harmful. We also determined the time required to reach therapeutic levels beyond the initial time frame of 48 hours.

Study population
A retrospective study was conducted at the ICU of the Medical Centre Leeuwarden. The ICU unit consists of 22 ICU beds. A search in the ICU Metavision® database was performed for patients receiving vancomycin therapy for at least 48 hours between November 2010 and May 2013. During this period three distinct study phases were identifiable. During the first phase, from November 2010 until November 2011 (group A), the pharmacy was not structurally involved in medication surveillance (e.g. checking the need for various types of TDM). During the second phase from November 2011 until September 2012 (group B), pharmacists were involved daily in medication surveillance. During the third phase from September 2012 until May 2013 (group C), the vancomycin dosing protocol was implemented next to daily medication surveillance. Patients with continuous infusion, single prophylactic doses, trough drawing > 1 hour before next dose and no known trough level were excluded. Trough levels and the time blood was drawn were obtained from the local laboratory Glimms® database. The time of vancomycin dose administration was obtained from the electronic medication administration registration. The following patient characteristics were noted: gender, age, body weight, BMI, estimated glomerular filtration rate (eGFR, ml/min/1.73 m2 , calculated with MDRD) at day 1 of vancomycin treatment, APACHE IV score and length of stay in the ICU and hospital.

Dosing protocol
Dosing advice in the consensus review by Rybak et al. 5 consists of a loading dose of 25-30 mg/kg for seriously ill patients and a maintenance dose of 15-20 mg/kg every 8-12 hours. We adapted this advice with the help of MW-pharm predictions (version 3.80 MediWare, Groningen, the Netherlands) to put together a practical protocol. It consisted of a loading dose of 1500 mg for patients < 70 kg and 2000 mg if > 70 kg, based on actual body weight. The next bi-daily doses were set at fixed times, but the first not earlier than eight hours after the loading dose. The bi-daily doses were 1000 mg for eGFR > 50 ml/min, 750 mg for eGFR 20-50 ml/min and 500 mg for eGFR < 20 ml/min and continuous veno-venous haemofiltration therapy (CVVH). The first TDM was performed 20-48 hours after therapy onset. The attending pharmacist made an estimated half-life based dosing recommendation, if necessary supported by MW-pharm prediction, based on initial TDM, targeted at achieving trough levels of 15-20 mg/l. Guidance on new TDM was provided.

Data analysis
In the primary analysis, groups A, B and C were compared to determine the effect of pharmacy involvement and pharmacy involvement plus dosing protocol in obtaining initial (< 48 hours) trough levels of > 15 mg/l. An intentionto-treat approach was used. The three groups were also compared to determine at which day of vancomycin therapy a known adequate trough level of > 15 mg/l was achieved. In addition, an ‘as treated’ analysis was performed to account for protocol non-adherence and for patients from group B who were already treated according to the protocol. All analyses were performed with PASW Statistics version 20.0 (SPSS Inc. Chicago, Illinois, USA). The nonparametric Mann-Whitney U test was used to compare time of adequate trough serum levels between groups pair wise. The one-way ANOVA and nonparametric Kruskal-Wallis test were used to compare patient characteristics between groups. Categorical data were tested for statistical significance with the χ2 or Fisher’s exact test where appropriate. Results from hypothesis testing were considered statistically significant at p < 0.05.

A total of 59 patients were included in the study. Patient characteristics and distribution across the three groups are shown in table 1. 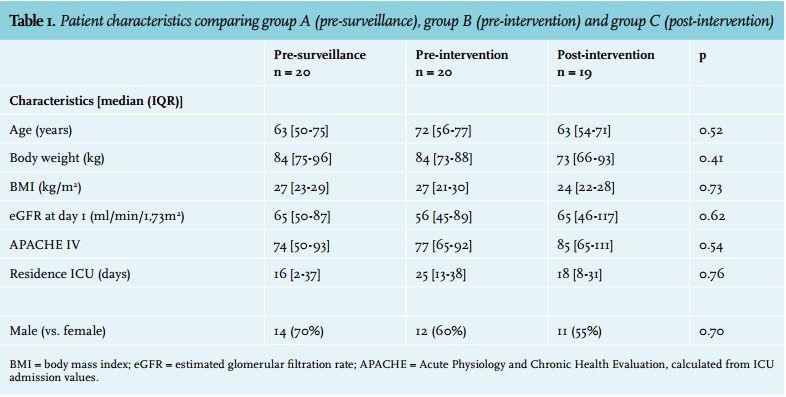 There was a difference between the three groups in attaining adequate vancomycin trough levels within 20-48 hours, (10% in group A, 29% in B and 60% in C, p = 0.016). In groups B and C more patients achieve early adequate trough levels. Comparing pre-intervention group B (29%) with post-intervention group C (60%), a non-significant difference (p = 0.07) was found. In addition to these categorical data, figure 1, panel A, shows individual trough levels across groups A, B and C. When looking beyond the initial 48 hours, groups B and C both achieve adequate vancomycin trough levels earlier in comparison with group A (figure 2, p = 0.002). After pharmacist intervention it took an average of 1.8 days for trough levels to reach an acceptable range (< 25 mg/l). No renal replacement therapy was started because of high trough levels. Kidney function loss after vancomycin therapy in group C was assessed. One patient experienced an eGFR deterioration of more than 25% (27%). 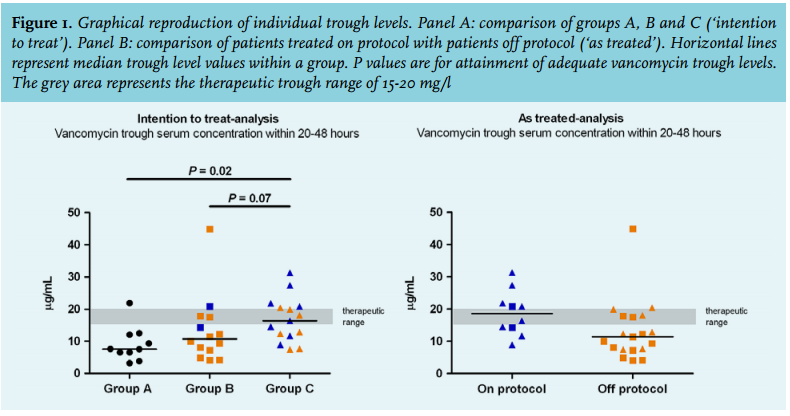 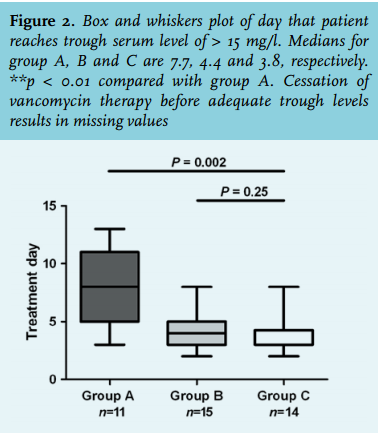 As treated
To study the actual impact of introducing the dosing protocol, treatment misclassification due to protocol non-adherence in group C (orange triangles in figure 1, panel A) and protocol use before official introduction in group B needed to be taken into account. Therefore, data from group B and C were pooled and compared based on protocol adherence within the first 48 hours. The results are shown in figure 1, panel B. Protocol adherence was defined as administration of the appropriate loading dose and maintenance dose within the first 48 hours, based on body weight and eGFR, respectively. There was a trend towards more timely trough levels in the on-protocol group (60%), compared with the off-protocol group (36%). This difference, however, is not statistically significant (p = 0.24) probably due to low patient numbers.

This study shows that pharmacist involvement and introduction of a dosing protocol at the ICU improves achievement of timely adequate vancomycin trough levels. Both the number of patients that reach timely therapeutic trough serum levels and the onset of therapeutic levels improved. ICU and pharmacy collaboration is known to optimise care.14

The as-treated analysis (eight patients in group C plus two patients in group B) indicated that the actual use of the treatment protocol resulted in, although not statistically significant, more timely adequate trough levels compared with manual initial dosing. Similar loading dose protocols are known to produce timely adequate trough levels as well.15 The moderate total protocol adherence could have multiple causes. The results reported in this study were obtained just after introduction of the protocol. It is possible that it took time for each intensivist to get familiar with the protocol. Second, physicians might have refrained from using the protocol because of a perceived potential of initial toxic trough levels. The most common deviation seen was a loading dose below the one prescribed in the protocol. This problem was further reflected in the results as seen in figure 1, panel B. Especially the two highest trough levels of 27 and 31 mg/l might have caused restraint because of the risk of nephrotoxicity. However, careful analysis of the characteristics of these two patients showed that they were admitted to the hospital for over three weeks, including several days in the ICU, before being treated with vancomycin. The eGFR, which is based on serum creatinine, could have been overestimated in these cases, resulting in too high vancomycin dosing and high trough levels. Therefore, caution seems warranted while using the protocol in patients who may have an unreliable eGFR. A limitation of this study is that an uncorrected eGFR in ml/min/1.73 m2 was used to determine the maintenance dose. However, even if corrected for body surface area, use of all formula based estimates has limitations, especially in ICU patients. At the time of protocol introduction, no better alternative for kidney function assessment was possible.

The general limitation of this study is the retrospective design with only a limited number of patients. This was further complicated by non-adherence and missing data. However, this is also the strong point of the study in that it reflects daily clinical practice well and brings to light problems in the introduction and use of a dosing protocol in clinical practice.

We observed that the introduction of our vancomycin dosing protocol and pharmacist involvement resulted in timely adequate vancomycin trough levels in patients admitted to the ICU. A careful introduction, also focusing on protocol adherence, needs attention.