A ‘shocking’ finish to the Dam tot Damloop event 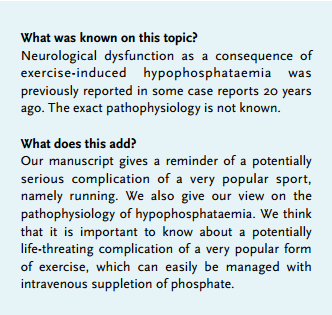 Running is currently a very popular form of exercise. The ‘Dam tot Damloop’ is a popular running event, between Amsterdam and Zaandam, with a total distance of ten English miles. In 2013, there were approximately 65,000 runners, both professionals and amateurs. Unfortunately, each year 10 to 15 participants are admitted to the Emergency Department of the Zaans Medisch Centrum, the hospital close to the finish line, because of syncope. Most of these runners exhibit signs of exertional heat stroke, a potentially life-threating condition in need of acute medical attention. There are also some electrolyte disorders that occur as a result of running. Hyponatraemia is a frequently observed disorder, especially in long distance running. Last year the team on the emergency department was confronted with a less frequent problem caused by running, namely extreme hypophosphataemia. This condition can cause serious complications, such as status epilepticus.

A 32-year-old, well-trained female was admitted because of syncope nearby the finish line of her 10-mile run. The weather conditions on the day of the race included an average temperature of 16.7 °C. with a humidity of 93%. Her past medical history showed a conjunctival melanoma in 1999, which was cured with local excision and radiation with strontium. At presentation in the Emergency Department, 15 minutes later, she was sweating but had no sequelae from the episode of syncope. Her blood pressure was normal at 114/82 mmHg, with a pulse rate of 112 beats/minute, her rectal temperature was 37.8°C and her respiration rate was 20 breaths/minute. Almost directly after presentation, blood was drawn and intravenous fluid resuscitation was started. About 10 minutes later she lost consciousness, with clear epileptic movements of the eye lids and extremities. A seizure was diagnosed and intravenous benzodiazepines were given, with only a partial and short-lasting effect. The patient was admitted to the intensive care unit and treated with phenytoin, sedation and ventilator support.

Laboratory investigation of the blood directly drawn after arrival at the emergency department and before the epileptic activity, showed a serum creatinine of 113 µmol/l (normal 49-90 µmol/l), a maximum creatine kinase of 1695 U/l (normal 0-140 U/l), a corrected calcium of 2.06 mmol/l (normal 2.20-2.60 mmol/l) and a severe hypophosphataemia of 0.30 mmol/l (normal 0.70-1.40 mmol/l). Sodium level was 140 mmol/l (normal 135-145 mmol/l), magnesium 0.68 (normal 0.66-1.07) and potassium 3.8 mmol/l (normal 3.2-4.9 mmol/l). Arterial blood gas examination revealed a metabolic acidosis, with a pH of 7.31 (normal 7.35-7.45), pCO2 35 mmHg (normal 35-45 mmHg), bicarbonate 17.6 mmol/l (normal 22.0-26.0 mmol/l) and a lactate of 2.6 mmol/l (normal < 2.2 mmol). Intravenous administration of phosphate was initiated, and the phosphate level rose to 0.62 mmol/l 90 minutes later. Five hours after the first laboratory results the phosphate level normalised, with a value of 1.18 mmol/l. In total, 40 mmol of phosphate was administered. The next day she had completely recovered, without signs of epileptic activity. An MRI scan of the brain showed no abnormalities. An EEG showed no signs of epileptic activity. 25-OH-vitamin D and parathyroid hormone levels were normal. The phosphate level in her urine was 5 mmol/l (normal: 13-44 mmol/l). Three months later, her calcium and phosphate levels were normal. The discharge diagnosis was status epilepticus, caused by a severe exercise-induced hypophosphataemia.

The most common complication of running is exertional heat stroke, with a very high temperature and syncope as essential signs. In our case, exertional heat stroke as a cause of syncope or hypophosphataemia is very unlikely, in our opinion, because of her normal rectal body temperature, stable haemodynamics and completely normal mental status at presentation. Exertional heat stroke can cause hypophosphataemia, probably as a result of the accompanying respiratory alkalosis that stimulates the enzyme phosphofructokinase to add a phosphate molecule to fructose-6 phosphate, forming fructose- 1,6-diphosphate, thereby trapping phosphate in the cell. But our patient did not have a respiratory alkalosis in her arterial blood gas drawn one minute after the start of the epileptic activity.

Hypophosphataemia without exertional heat stroke is a very rare complication of exertion, and only a few case reports have been described.1 In one small study, participants with a syncope during a running event had a significantly lower serum phosphate compared with runners who completed the run without syncope. The condition and phosphate level of all of the participants with a syncope improved and normalised spontaneously without interventions.2 The exact cause or pathophysiology is unknown, but there are some possible explanations. Phosphate is a very important substance in the physiology of muscle contractions. The required energy for muscle contractions is derived from breakdown of adenosine triphosphate (ATP). The breakdown of ATP results in the formation of energy, adenosine diphosphate (ADP) and phosphate. Because the store of ATP is quickly depleted, there is also some energy stored in phosphocreatine. The enzyme creatine kinase can break down phosphocreatine and this results in the formation of ATP. More energy for muscle contractions needs to come from the breakdown of glycogen, stored in the muscle and liver, also known as glycogenolysis. The enzyme phosphorylase splits glucose from glycogen by adding a phosphate molecule, thereby forming glucose-1-phosphate. Both epinephrine and glucagon stimulate the enzyme phosphorylase.3 When glucose enters the (muscle) cell, a phosphate molecule is attached to prevent the glucose from leaving the cell, so it can be used to generate energy. This is done by the enzyme glucokinase, and glucose-6-phosphate is formed. During glycolysis, glucose is further degraded to produce energy. First, two molecules of phosphate are invested to form glucose-6-phosphate and fructose-1,6-diphosphate respectively. This will be further degraded to pyruvic acid and acetyl-CoA, respectively; the latter is used in the Krebs cycle to produce energy.4

Given these biochemical reactions, there are some possible explanations for exercise-induced hypophosphataemia. First, there can be some temporary loss of phosphate during the first steps of glycogenolysis and glycolysis, where phosphate is invested to form intermediate products in the process. On top of this, during exercise concentrations of epinephrine and glucagon will be higher, which will induce glycogenolysis by stimulating phosphorylase.5 Otherwise, when glucose enters the cell during exercise, a phosphate molecule will be attached to prevent the exit of glucose out of the cell. Secondly, the depleted stores of phosphocreatine need to be replenished, with consumption of phosphate.5 In our case there was also a mild hypocalcaemia, which could be caused by sequestering of calcium into damaged muscles, but we believe the mild hypocalcaemia had no role in the neurological dysfunction.

Hypophosphataemia is related to different forms of neurological dysfunction, such as confusion, neuropathy, seizures and coma. The mechanism that leads to neurological dysfunction is unclear, but it can be caused by diminished levels of ATP and thus energy production in the central nervous tissue. Another reason can be lower concentrations of 2,3-diphosphoglycerate and ATP in red blood cells, causing an increased haemoglobin-oxygen affinity which in turn will cause lower oxygen delivery and oxygen concentration in nervous tissue cells.3,6 This can also explain why our patient developed an epileptic state and other patients with a comparable phosphate level do not, because after running there is already diminished oxygen delivery to the brain as a result of an oxygen debt of the muscles.

The reason why some runners develop hypophosphataemia and others do not is unclear. A previous observational study showed a trend between the training status of runners and their phosphate levels after competition. It is unclear if this is caused by training, diet or just genetics.7 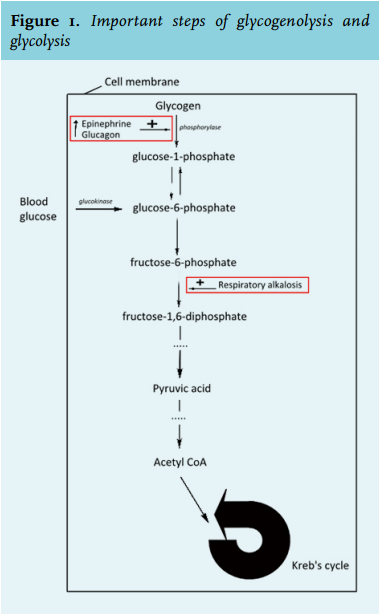 In conclusion, syncope or neurological dysfunction during or directly after running is generally due to exertional heat stroke and some electrolyte disorders. A common electrolyte disorder is hyponatraemia. If the core temperature is completely normal, exercise-induced hypophosphataemia should be considered. We would like to alert you to the fact that hypophosphataemia could be a serious complication of exercise. It is important to recognise this condition, because it is easily treated and adequate treatment can prevent complications, although in one case report spontaneous normalisation of the phosphate levels occurred.2