Vitamin D deficiency is common in elderly patients with a fracture caused by a low-energy trauma. Bours et al. found a vitamin D deficiency (< 50 nmol/l) in 64% of their patients, all with a recent fracture.1 Severe vitamin D deficiency is associated with muscle weakness, bone pain, and an increased risk of falls and fractures.2 In general, the supply of vitamin D mainly relies on exposure to the sun, body mass index (BMI) and skin colour.3
The recent Dutch guidelines on osteoporosis and fracture prevention advise a daily intake of 800 IU cholecalciferol for people over 50 years of age and those suffering from osteoporosis. They additionally recommend a 25-hydroxyvitamin D level target value of at least 50 nmol/l.4 However, several authors consider the optimum level to be > 75 nmol/l, since it is considered to be the minimum level to prevent falls.5 All in all, considering its impact on preventing falls and fractures, vitamin D supplementation is of great importance.

No consensus has been reached on whether a post-treatment control level should be established when a mild or severe vitamin D deficiency has been diagnosed, or on what the optimum daily dose of vitamin D supplementation should be in clinical practice.2 Van den Bergh et al. recently proposed to establish a control 25-hydroxyvitamin D level after three months of supplementation and, if necessary, to adjust the recommended dose of cholecalciferol.6 They based their proposal on the finding that, in a low-energy fracture patient population, the optimal level of > 50 nmol/l was often not reached with a daily dose of 800 IU.1

Standard descriptive statistical methods were used. To determine the association between two continuous variables, a linear regression was calculated with the correlation coefficient (r) and p-value for the beta of the independent variable.
A student’s T-test was used to calculate the association between a continuous variable and a binomial variable, and for a multiple category variable, the ANOVA test for an ‘overall’ p-value was used; to further explore the associations we computed Tukey multiple comparisons paired p-values and a p-value for linear trend. 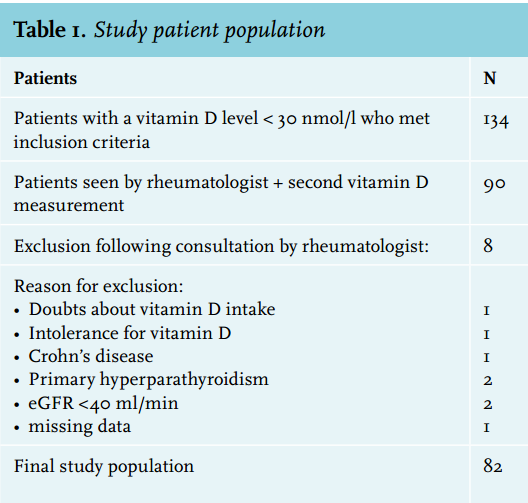 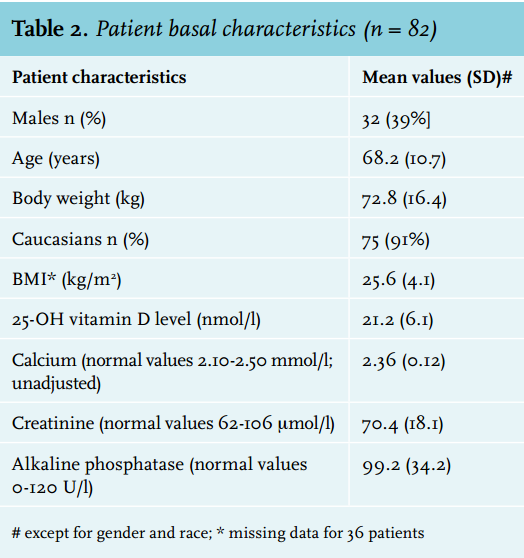 Statistical analysis showed a significant positive correlation between the increase in 25-hydroxyvitamin D level and the number of days that passed between the first and second measurement (r = 0.246, p = 0.0260). Even after three months of vitamin D supplementation, a plateau phase was still not reached (figure 3). 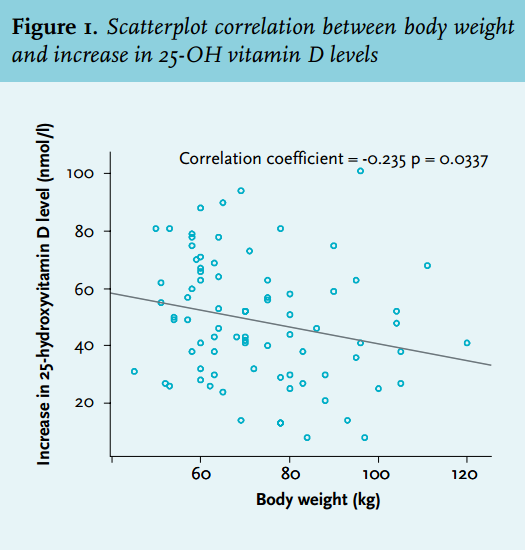 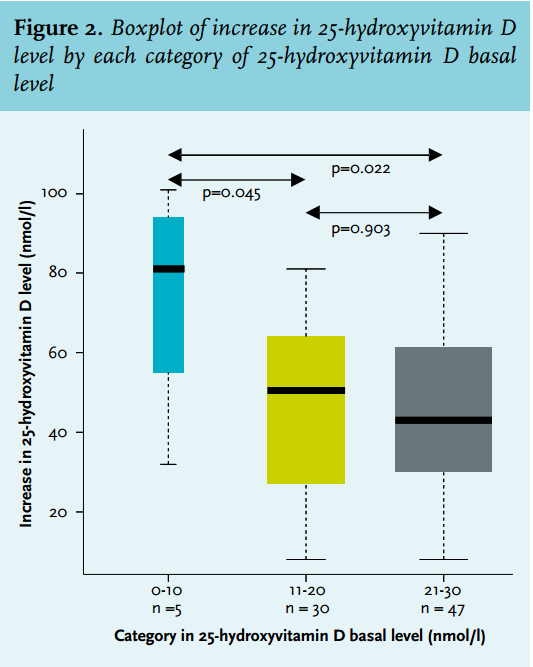 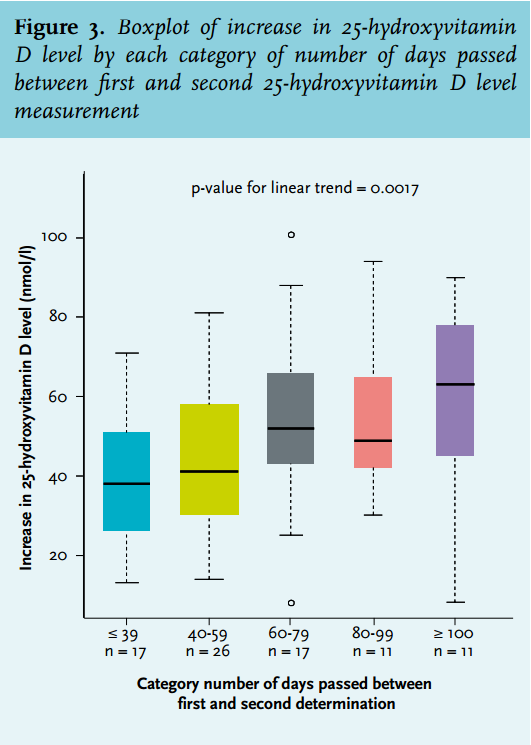 After supplementation with 800 IU/day, Lips et al. observed a larger increase in the 25-hydroxyvitamin D level (namely from 23.7 nmol/l to 80 nmol/l) after three months in elderly patients (> 80 years) living in nursing homes or old peoples’ homes, who likely had a better compliance.9 Gallagher et al. recently reported in a placebo-controlled study with healthy post-menopausal women (mean basal vitamin D level 38.2 nmol/l) that after three months of supplementation with 800 IU vitamin D a day, a vitamin D level of > 50 nmol/l was reached in 97.5% of the cases.10 These results obviously cannot be translated to clinical practice in fracture patients who are for the most part older and have lower basal vitamin D levels. In daily practice, it is a clinically relevant question to ask whether the generally recommended dosage of 800 IU vitamin D per day11 is sufficient for elderly patients with a recent fracture and a severe vitamin D deficiency.

We are not aware of any other reports on the increase of vitamin D levels after supplementation in elderly fracture patients with very low basal vitamin D levels. In our study, the patients with the lowest 25-hydroxyvitamin D basal levels showed the highest increase after supplementation. This is in concordance with results previously reported in the literature on this subject.2 In the present study, no plateau phase was reached after three months of supplementation. Vieth et al. showed that healthy volunteers (mean age 41 years) taking 1000 IU/day of vitamin D reached a plateau phase of vitamin D after three months, with vitamin D levels increasing from 40.7 to 68.7 nmol/l.12 However, in a study with elderly subjects, Lips et al. reported on a plateau phase after 6-9 months of supplementation.9 A control measurement of vitamin D should therefore be conducted after at least three months of supplementation3 or, in our opinion, perhaps preferably after six months.
Fewer than half (45.1%) of our patients reached the generally advised 25-hydroxyvitamin D target value of 50 nmol/l (after ten weeks). We do realise that this threshold of 50 nmol/l is arbitrary and that some advocate higher target levels such as 75 nmol/l.6 As expected, a level of > 75 nmol/l was reached in only a minority of our patients (12.2%). We do agree that the follow-up time was probably too short to reach a new plateau level of vitamin D.

Despite that, it seems likely that the generally used and recommended dosage of vitamin D of 800 IU/day is too low and that treatment should perhaps consist of a higher, possibly loading, dose,6,8 especially in cases of severe deficiency and obesity.5 Van Groningen et al. found an increase of vitamin D from 20.5 to 74.8 nmol/l after eight weeks following a loading dose of vitamin D (total dosage 100,00-200,000 IU) in vitamin D-deficient adults. The target levels of vitamin D of 50 and 75 nmol/l were reached in 76% and 48%, respectively.13 These figures are obviously higher than in our study. Of course, it may also be considered to adjust the dosage of vitamin D suppletion according to the basal vitamin D levels.

We identified an inverse correlation between body weight and basal vitamin D levels. Indeed, it is already known that obese subjects have lower basal vitamin D levels because they have a larger distribution volume.13,14 It has been demonstrated in recent literature that also the increase in the 25-hydroxyvitamin D level negatively correlates with body weight and/or BMI.11,15 Indeed, in our only slightly obese patients (BMI 25.4), we found a negative correlation between body weight and the increase in vitamin D levels. We did not find such a correlation between this increase and BMI due to a large quantity of missing data on height. The most important limitations of our study are its retrospective format and the follow-up time < 100 days, which is too short to reach a new plateau level of vitamin D. In addition, there was no information on dietary intake of vitamin D and compliance of intake of vitamin D medication. The study’s strengths are: it reports on a clinically relevant question in daily practice and that it was investigator driven without any financial support.

In conclusion, we have shown that after a dose of 800 IU/day of vitamin D, only 45.1% of the elderly fracture patients with a severe vitamin D deficiency reached the advised 25-hydroxyvitamin D level of > 50 nmol/l after an average of ten weeks. The increase in vitamin D level had an inverse correlation with basal vitamin D levels and body weight, and was expectedly associated with the duration of supplementation. Based on our data and data from the literature, we propose taking a second measurement of the vitamin D level after at least six months of supplementation, with dosage adjustment.