A man with erythema and blisters on his forearms

A 71-year-old man with a history of chronic ischaemic heart disease presented to the hospital with stinging and itchy blisters on both arms. The patient was a non-alcoholic and non-smoker. There was no relevant family history. His medications included enalapril, carvedilol and aspirin. He had been working in a garden three days ago when he got scratches from a bush there. After this episode the patient realised that he had some blisters and redness on his forearms and hands. The patient did not remember any insect bites. He denied taking any over-the-counter medication or other new medication. Physical examination revealed confluent erythematous macules forming vesicles and tense bullae (figure 1) over some remains of scratches. Some of the lesions had linear patterns (figure 2). There were isolated meliceric crusts that showed impetiginisation. The Nikolsky sign (shearing of normal epidermis in response to lateral pressure) was negative. Oral mucosa and genitalia were respected. He had neither fever nor other symptoms. 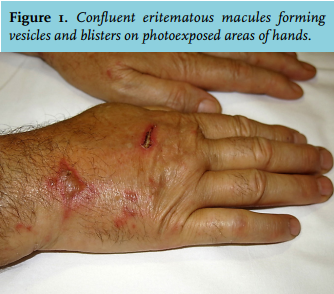 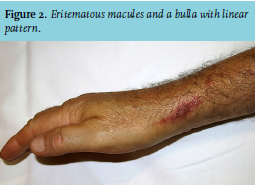 This entity is equally prevalent in both sexes, and it can occur at any age. It is significantly more frequent in some employments such as bartenders, grocery staff and agricultural farm workers,2 although it can occur at non-occupational situations too. Phytophotodermatitis tends to have seasonal behaviour since it more often occurs in the spring and summer. While any ethnicity can be affected, dark-skinned people usually develop the disease with only the post-inflammatory pigmentation and without previous erythema and blisters.1 Diagnosis can be easily made without any complementary tests if the pattern is well recognised and a detailed history is taken. Other entities to be considered in the differential diagnosis are pemphigoid, porphyria cutanea tarda, herpes simplex or thermal burns, and particularly acute irritant contact dermatitis, but this disease is eczematous and phytophotodermatitis is not.

Active treatment for phytophotodermatitis is not usually effective. Phototoxic reaction could only be obviated by washing exposed areas. To avoid new reactions, preventive strategies such as covering the extremities with gloves and boots when working with psoralen-containing plants and not pruning these plants during hours of maximum sun exposure may be useful.1