A 57-year-old male with a history of chronic obstructive pulmonary disease presented to the emergency department (ED) after an episode of vigorous coughing resulting in severe chest pain and the sensation of a cough-dependent swelling on the right side of the thorax. The patient was recently discharged from the pulmonary department where he was treated for a spontaneous right-sided pneumothorax with chest tube placement. At presentation to the ED, a chest X-ray showed residual subcutaneous emphysema after his pneumothorax, but when the patient was asked to perform the Valsalva manoeuvre (figure 1), a region of air density became apparent beyond the confines of the thoracic cavity. Furthermore, during admission he also complained of abdominal pain and a computed tomography scan revealed intercostal herniation of the liver (figure 2). 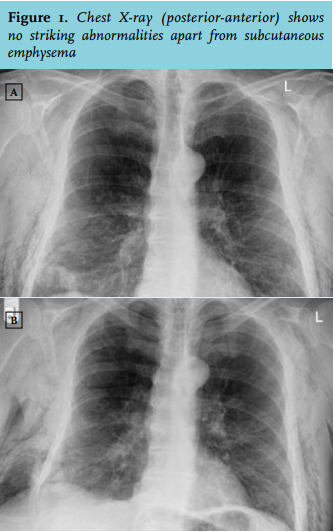 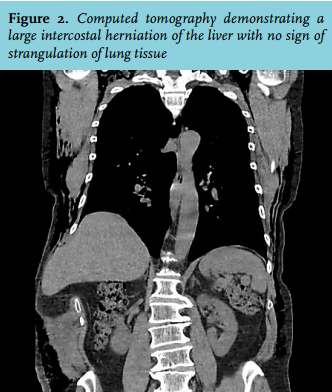 Lung hernia is an uncommon diagnosis, defined as the protrusion of lung tissue beyond the confines of the thoracic cavity through an abnormal opening in the chest wall, diaphragm or mediastinum lined by pleura.1 Pulmonary hernias were first described by Morel-Lavallée and classified based upon both the aetiology and anatomical location.1 Anatomically, pulmonary hernias can be divided into cervical, thoracic, mediastinal and diaphragmatic.1 Pulmonary hernias can also be categorised into the congenital and acquired type, the latter being further classified into traumatic (e.g. costal fractures and/or intercostal muscle rupture), spontaneous (an acute increase in thoracic pressure resulting in a thoracic disruption), pathological (destruction of thoracic wall by cancer) and postsurgical (both video-assisted thoracoscopic surgery (VATS) and thoracotomy are known to cause postsurgical lung hernia’s1,2). The most typical presentation of a lung hernia is a painful subcutaneous mass varying in size during inspiration and expiration, increasing when performing the Valsalva manoeuvre, frequently with a history of chest trauma, surgery or chest tube placement.3 The differential diagnosis of a painful palpable mass of the chest wall should include subcutaneous emphysema, chest wall lipoma, abscess or (sub)cutaneous metastasis, together with the differential diagnosis of localised chest pain such as pulmonary embolus, pleuritis and costal pathology. When intercostal lung herniation results in lung tissue strangulation and pneumothorax, surgical intervention is indicated. The goal of surgery should be recovering the integrity of the thoracic wall by reduction of the hernia followed by closure of the hernia with or without mesh repair, depending on the localisation and size of the defect.4