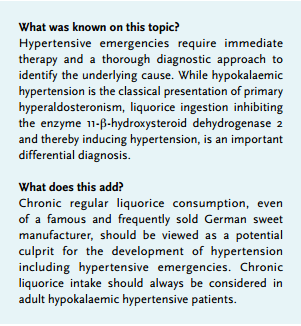 A 57-year-old Caucasian male patient with an unremarkable medical history presented to the Emergency Department with acute visual impairment. Initial examination revealed hypertensive retinopathy grade IV on ophthalmological fundoscopy and a blood pressure of 250/110 mmHg. The examination was otherwise normal (heart rate 88 bpm, temperature 36.8°C, weight 75 kg, height 1.75 m). Laboratory testing showed a severe hypokalaemia of 2.07 mmol/l (table 1). Potassium chloride was administered and antihypertensive treatment immediately started using intravenous urapidil and sublingual glyceryl trinitrate, which finally resulted in improved blood pressure levels. To identify a potential cause for the hypertensive emergency, further diagnostic procedures were initiated. Normal serum creatinine, urinalysis and an inconspicuous abdominal ultrasound and renovascular Doppler imaging ruled out renoparenchymous or renovascular hypertension. Endocrine testing (table 1) excluded hypertension due to hyperaldosteronism, hypercortisolism, pheochromocytoma and paragangliomas. However, suppressed plasma aldosterone and renin levels were suggesting pseudohyperaldosteronism. Further evaluation of the patient’s habits disclosed a noticeable weekly consumption of at least three packs of liquorice (each 300 g) from a German sweet manufacturer for the last three to four months. Since this nutritional behaviour was considered to be likely related to the patient’s hypertension, the liquorice consumption was stopped. Initially, antihypertensive medication comprising seven different drugs was required to lower the blood pressure below 140/70 mmHg (table 2), finally resulting in substantial improvement of eye vision at the time of discharge. One month later, his blood pressure (160/80 mmHg) had already improved with the need for only two antihypertensive drugs (table 2). While the hypertension was not yet satisfactorily controlled, laboratory tests showed a normal potassium value at that time (table 1). After three months, with the patient still not eating any liquorice and having treatment with the same two antihypertensive drugs, a normal blood pressure was achieved (table 2). 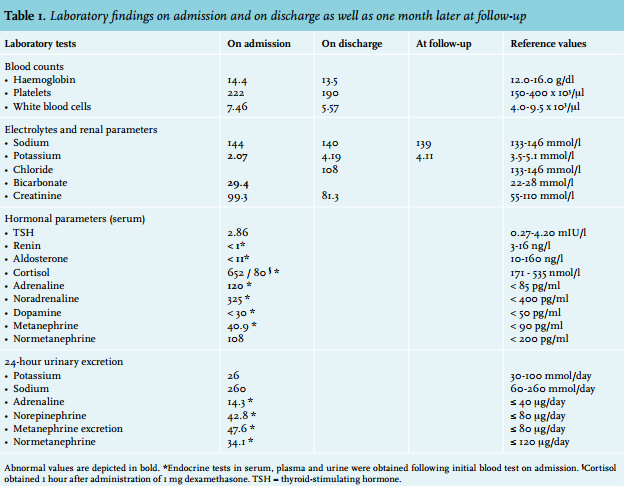 Hypertension associated with hypokalaemia is the classical presentation of primary hyperaldosteronism. However, the present patient’s laboratory testing showed suppressed aldosterone and renin levels with a normal aldosterone-to-renin-ratio. While the clinical picture resembled hyperaldosteronism, the hormonal profile showed hyporeninaemic hypoaldosteronism. Liddle’s syndrome is a hereditary hypertension with hypokalaemia due to gain-of-function mutations in the gene encoding the renal epithelial sodium channel.1 However, this disorder is rare and the age of onset is in childhood; thus, Liddle’s syndrome was considered very unlikely to be present in this case. Another form of low-renin hypertension associated with low aldosterone and hypokalaemia is apparent mineralocorticoid excess (AME), a congenital defect in 11-β-hydroxysteroid dehydrogenase 2 (11-β-HSD2).2,3 Since 11-β-HSD2 converts the biologically active cortisol to inactive cortisone, the defect allows cortisol to act as a ligand for the mineralocorticoid receptor, thereby resulting in sodium retention and volume expansion. However, as with Liddle’s syndrome, AME is a disorder of the young, starting in early childhood. A much more common cause of hypertension due to pseudohyperaldosteronism in the adult is excessive liquorice consumption, with its ingredient glycyrrhizin being responsible for a mineralocorticoid effect.

Previous reports showed that glycyrrhizin blocks 11-β-HSD2, thereby mimicking AME and resulting in hypertension, hypokalaemia and alkalosis at any age.4 Due to the blockage of 11-β-HSD2 the active cortisol binds to the aldosterone receptor. Via this mechanism the serum concentration of renin and aldosterone is low in affected patients. In fact, consumption of a considerable amount of liquorice explained the hypertension which probably developed gradually in the present patient, finally resulting in a hypertensive emergency. In addition, the elevated bicarbonate level indicated alkalosis, which perfectly complements the laboratory findings. While liquorice-induced hypertension is a well-known entity and liquorice is coming more and more into discredit,5-7 a hypertensive emergency with acute visual impairment in terms of retinopathy due to liquorice in sweets has not yet been reported. Liquorice ingestion has been described to be a possible cause of posterior reversible encephalopathy syndrome (PRES), which could induce visual disturbance.8 MRI or at least CT scan of the brain might have been useful for differential diagnosis in our case. However, because of the hypertensive retinopathy proven by fundoscopy and the triad of hypertension, hypokalaemia and alkalosis PRES was unlikely to be the underlying reason. Further investigations in the present case revealed that the glycyrrhizin content per kg ingested liquorice was about four grams. Since the patient stated an average consumption of approximately 1 kg liquorice per week, his intake resulted in approximately 500 mg glycyrrhizin per day.

Recently, a Swedish study with healthy volunteers revealed a linear dose-response relationship of liquorice ingestion and hypertension starting at a daily intake of 75 mg glycyrrhizin for two weeks.9 In addition, in 2006, Sigurjonsdottir et al. described that the aldosterone effect of liquorice might be gender specific and males may be more susceptible.10 This might have even increased the effect of the liquorice ingestion in the present case. Of note, the hypertensive effect may prevail for some time despite stopping ingestion of liquorice, as observed in the present case. Thus, patients should be monitored for some time after stopping liquorice intake, Sigurjonsdottir and colleagues recommend a period of up to four months until the renin suppression is overcome.9 In the present case, effective control of blood pressure over time with only two antihypertensive drugs underlines that prior excessive liquorice consumption had been at least partly responsible for the hypertensive emergency in this patient. However, a potential effect of additional essential hypertension cannot be excluded. In conclusion, regular liquorice consumption should clearly be viewed as a culprit for the development of hypertension including hypertensive emergencies and liquorice intake should always be considered in hypokalaemic hypertensive patients.

We thank our patient for the written consent to publish this clinical case. We assured complete confidentiality at all times.