Hypophosphatemia, an electrolyte disorder, is very common in ICU patients.1 Severe hypophosphatemia has been associated with respiratory and cardiac failure, difficult weaning from mechanical ventilation, rhabdomyolysis, neuropathy and thrombocytopenia.1-4 ICU and in-hospital mortality are increased in hypophosphatemic patients, in particular in those who develop phosphate levels < 0.40 mmol/l.5 Although a causal relationship between hypophosphatemia and mortality has not been firmly established, it is common practice to correct phosphate levels < 0.60 mmol/l by intravenous infusion of sodium-phosphate or sodium-potassiumphosphate (Na-K-P). Several replacement regimens have been proposed, mostly with fixed doses of phosphate.6 An exception is the recently proposed individualized replacement strategy using body weight, distribution volume and serum phosphate levels to calculate the required replacement dose.7 Evaluation of this strategy in our hospital in 50 ICU patients revealed high efficacy and safety.8 However, the majority of patients in this validation study had mild hypophosphatemia, whereas only 10 patients had a serum phosphate < 0.4 mmol/l.
We therefore decided to extend the evaluation of this protocol in a larger group of patients with phosphate levels < 0.40 mmol/l, and to compare the results with patients who had phosphate levels between 0.40 and 0.60 mmol/l.

This retrospective study was performed according to the regulations of the local ethics committee and performed in accordance with the Declaration of Helsinki, in a 15-bed ICU of a large teaching hospital in the Netherlands. The ICU population consisted of general medical and surgical patients. Exclusion criteria were: age < 18 years, serum creatinine > 150 mmol/l, serum total calcium corrected for albumin > 2.65 mmol/l, serum potassium > 4.5 mmol/l, phosphate not being replaced according to protocol and missing values after supplementation. The primary endpoint was the percentage of patients reaching a serum phosphate of > 0.6 mmol/l on the next morning at 06.00 hours after supplementation according to the algorithm.
Seventy-one ICU patients with a serum phosphate of < 0.60 mmol/l were included: 36 consecutive patients with severe hypophosphatemia (< 0.40 mmol/l) and 35 consecutive patients with moderate hypophosphatemia (0.40 - 0.60 mmol/l). Phosphate replacement was performed with sodium-potassium-phosphate (Na2K5PO46: 1.5 mmol phosphate/ml), administered intravenously by infusion pump through a separate channel of a central venous catheter, at a fixed infusion rate of 10 mmol/h. Calculation of the total phosphate replacement dose was based on the actual serum phosphate level in mmol/l, a target level of 1.25 mmol/l and a phosphate distribution volume of 0.5 L/kg body weight, according to the following algorithm:8
Phosphate dose in mmol = 0.5 x body weight x (1.25 – [serum phosphate]) (1)
Serum ionized calcium, creatinine, sodium, magnesium, phosphate and potassium were measured by routine clinical chemistry assays.8 Normal ranges are: calcium 1.10-1.32 mmol/l, creatinine 45-90 mmol/l, sodium 134-145 mmol/l, magnesium 0.7-1.10 mmol/l, phosphate 0.80-1.45 mmol/l and potassium 3.5-4.7 mmol/l.

Statistics
Results are shown as mean values ± standard error of the mean (SEM). Changes within a group, in response to treatment, were tested for normal distribution and compared with a paired t-test or Wilcoxon signed-rank test accordingly. Changes between groups were tested for normal distribution and analyzed by unpaired t-test or the Mann–Whitney U test. A p-value < 0.05 was considered to reflect statistical significance. 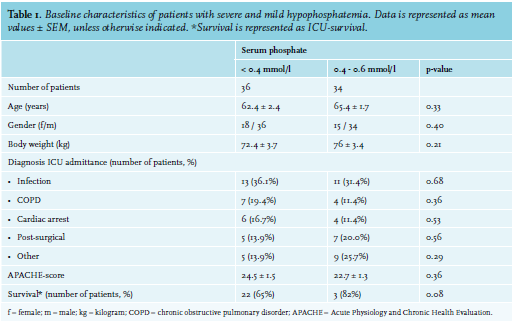 The results of the present study show that correction of hypophosphatemia with a calculated phosphate loading dose based on body weight (in kg), distribution volume (in l/kg), serum phosphate concentration (in mmol/l) and a target serum phosphate of 1.25 mmol/l is effective and safe in patients with severe hypophosphatemia. The regimen ensured that all patients with severe hypophosphatemia had a rise in serum phosphate (mean rise 0.38 ± 0.04 mmol/l); no patients had a serum phosphate of < 0.4 mmol/l the next morning, and 56% achieved a serum phosphate > 0.6 mmol/l. Only one patient developed mild hyperphosphatemia, and three other patients had mild hyperkalemia, whereas serum calcium or sodium did not change significantly. The algorithm predicted the required phosphate supplementation dose better in patients with moderate hypophosphatemia than in patients with severe hypophosphatemia: 86% versus 56% achieved a phosphate level > 0.6mmol/l, respectively.
Hypophosphatemia is a frequent finding in ICU patients. It may be caused by redistribution of phosphate, gastrointestinal loss or renal phosphate loss.1 The serum phosphate level in the body represents 1% of total body phosphate, the remainder being found in bone (85%) and intracellularly (14%).9 The level required to avoid the potentially deleterious effects of phosphate depletion in ICU patients is currently not known. However, there is evidence to suggest that hypophosphatemia is associated with a number of deleterious effects such as respiratory and cardiac failure, rhabdomyolysis, neuropathy, thrombocytopenia and difficult weaning from mechanical ventilation.1-4 The trigger to start phosphate replacement varies widely between institutions. In most ICUs, replacement will be initiated if serum phosphate is < 0.60 mmol/l; fewer than 10% of ICUs allow serum phosphate levels to drop below 0.3 mmol/l.10 The latter is close to the cut-off level of 0.4 mmol/l that is associated with a progressive increase in ICU mortality.5 Indeed, even in our study with a limited number of patients, lower phosphate levels were borderline correlated with survival (p = 0.08). Without implying a causal relationship, and lacking evidence to the contrary, it appears to be prudent to maintain phosphate levels at least above 0.4 mmol/l. It is well recognized that a larger number of observations will be needed to improve the power of evidence.
Our study has some limitations. The 06.00 hrs. phosphate levels measured in these patients are a composite result of Na-K-P infusion the day before and the combined effect of redistribution of phosphate and ongoing renal phosphate and potassium loss. As blood samples were not taken immediately after the completion of infusion, we have no knowledge of the peak of phosphate and potassium levels and thus cannot reliably exclude the possibility that the incidence of transient hyperphosphatemia and hyperkalemia may be somewhat higher than we observed in the present study, based on measurements taken on the first morning after phosphate correction. In a previous study, we observed a post-infusion mean decline in serum phosphate of 0.3 mmol/l for a comparable post-infusion interval, and if we extrapolate this to the present study (see figure 1), we consider the risk of clinically significant hyperphosphatemia or hyperkalemia immediately after infusion to be very low.8 Furthermore, we did not test our algorithm in patients with a serum creatinine > 150 mmol/l. However, since these patients usually retain phosphate rather than excrete it via the urine, the number of patients with a high serum creatinine and hypophosphatemia will probably be small.